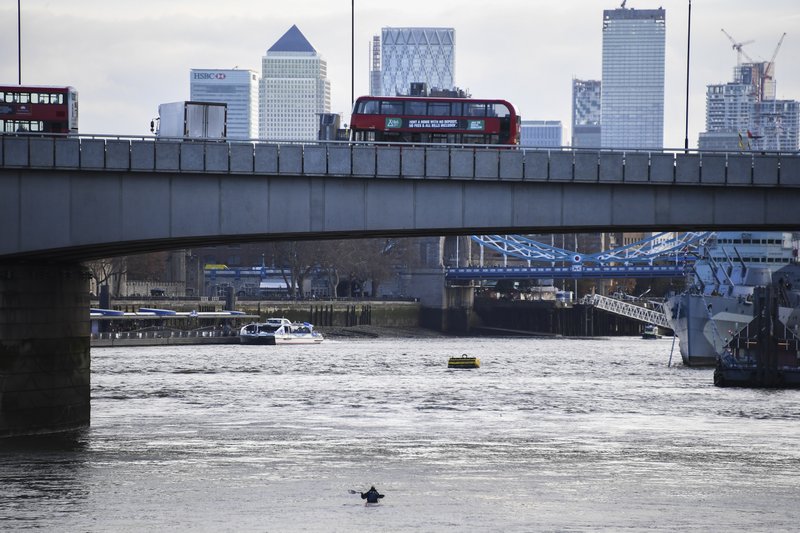 Buses and cars remain on London Bridge in London on Sunday after it being closed to traffic and public after an attack on Friday. Authorities in Britain say the convicted terrorist who stabbed to death two people and wounded three others in a knife attack Friday had been let out of prison in an automatic release program. - AP Photo/Alberto Pezzali

LONDON -- Britain's political leaders sparred Sunday over who is responsible for the early release of a convicted extremist who launched a stabbing attack in central London that left two dead and injured three.

After a one-day pause out of respect for victims, Friday's attack is dominating the political scene as the Dec. 12 election nears, shifting the focus, at least for the moment, from Brexit and the National Health Service to issues of security and criminal justice.

The argument centers over the early release from prison of Usman Khan, who served roughly half his sentence before being set free. He was able to stab five people before being shot dead by police despite conditions imposed on his release that were supposed to protect public safety.

Prime Minister Boris Johnson, portraying himself as tough on crime, on Sunday blamed Khan's freedom on changes in sentencing rules made by the last Labour Party government before Johnson's Conservatives took power in 2010. He promised to toughen sentencing laws.

"I think it is repulsive that individuals as dangerous as this man should be allowed out after serving only eight years and that's why we are going to change the law," he told BBC's Andrew Marr Show.

Marr repeatedly challenged the prime minister by pointing out that the Conservatives had been in power for nearly a decade and not taken any steps to change the situation Johnson was complaining about.

The accuracy of Johnson's claim was challenged by Ed Davey, deputy leader of the Liberal Democrats, who told Sky News that the prime minister was misleading the public about the current law regarding the early release of prisoners.

"Either he's incompetent and doesn't know the law, or he's deliberately misleading people when we've got a tragedy on our hands, and I'm afraid, either way, it does not look good for the prime minister," Davey said.

He said Johnson has a track record of misleading the public on this and other matters, including Brexit: "I'm really alarmed that we are on the brink of having a prime minister who is the most untruthful prime minister of all time."

Regardless of who is to blame, it is clear that setting Khan free before his sentence was concluded put the public at risk at a time when the official terrorism threat level had recently been lowered because of a perceived reduction in the risk of jihadis returning from Syria to Britain to launch attacks.

The Ministry of Justice has begun an urgent review of cases like Khan's that might pose a threat, including a review of the conditions governing the movements of every convicted terrorist who has been released from prison.

Officials say about 74 people fit this category. Conditions typically including the wearing of an electronic device that allows police to track a person's movements, a curfew, limitations on internet use and smartphone use, and reporting on a regular basis to police.

Police have said that Khan appears to have been in compliance with the conditions governing his release, which weren't made public, but nonetheless was able to carry out a deadly assault that didn't rely on sophisticated weaponry or detonation of an explosive device.

Labour leader Jeremy Corbyn accused the Conservatives of trying to provide security "on the cheap" and said he doesn't necessarily agree that all terrorist prisoners should be required to serve their full terms.

He said it depends on the circumstances and called for the Parole Board and the probation service to be more actively involved.

Johnson's Conservatives quickly tried to capitalize on Corbyn's statement in a clear indication that the extremist attack is now fair game for political brinksmanship.

The party tweeted a promise -- "We will change the law so terrorists serve every single day of their sentence" -- along with a warning about Corbyn's opposition to this plan.

"Who do you trust to keep you safe?" it asks.