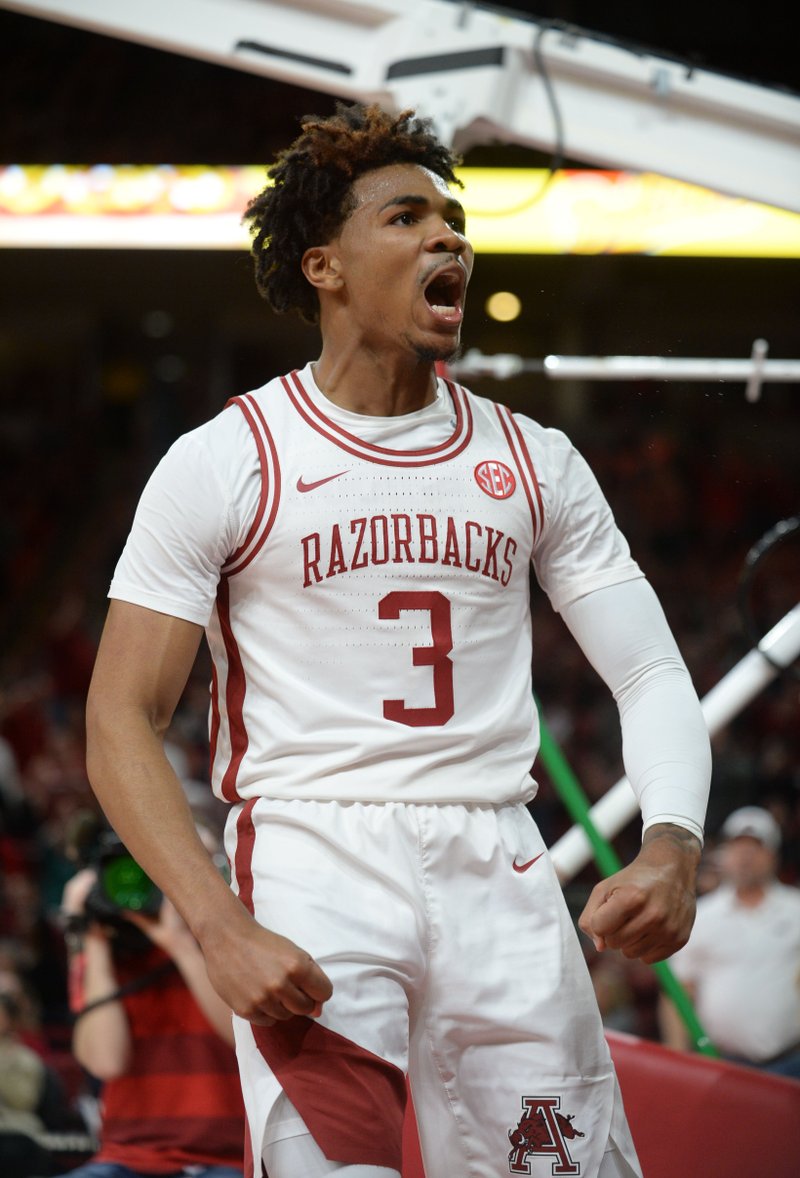 Arkansas guard Desi Sills celebrates after scoring during the first half of Saturday's game against Northern Kentucky in Bud Walton Arena. - Photo by Andy Shupe of the NWA Democrat-Gazette

FAYETTEVILLE -- University of Arkansas guard Desi Sills continues to struggle with his perimeter shooting, but he's still contributing in a significant way on offense for the Razorbacks.

Sills scored a season-high 17 points in Arkansas' 66-60 victory over Northern Kentucky on Saturday despite shooting 0 of 5 on 3-point attempts.

The 6-0 sophomore did his damage on the inside, either driving through Northern Kentucky's zone for layups or scoring on fast breaks, including a dunk after making a steal.

With Mason Jones, the Razorbacks' leading scorer at 18.5 points per game, sidelined against the Norse because of a shoulder injury, Sills more than doubled his average coming into the game of 8.2 points.

"We were a man down -- a scorer down -- and Desi came in and put those points on the board for us," senior guard Jimmy Whitt, who led the Razorbacks with 24 points, said of how Sills helped fill the void Jones left. "That's huge."

Arkansas coach Eric Musselman said the Razorbacks could have done with Sills attempting fewer 3-pointers, but that he did a good job getting to the basket.

Sills fell one point shy of his career-high 18 points that he scored at Indiana last season when the Hoosiers beat the Razorbacks 63-60 in the NIT.

"Desi was a little more aggressive, and his dribble drives against their zone was phenomenal," Musselman said on how Sills attacked Northern Kentucky. "He's going against big guys, and he's finishing. Probably the most important thing is, he's actually seeking contact inside that charge circle. He's getting into bodies of shot blockers.

"I thought he did a great job of getting and-ones going to the rim. So, he's getting three-point plays, but they aren't behind the arc. They're the old-school way."

Sills twice was fouled after scoring baskets inside, then missed the free throw. But he hit three consecutive free throws after behind fouled on a 3-point attempt.

"I think he's a kid that's really aggressive and plays with the kind of personality and approach that I'm sure Eric wants in his team and his players," Northern Kentucky coach Darrin Horn said.

The Razorbacks didn't know that Jones wouldn't play until shortly before tipoff.

"I'm pretty sure everybody has that mindset of, 'How can I help? How can I make plays?'" Whitt said. "I knew Desi was going to have to step up offensively, and he did. He did that very well. You've got to give a lot of credit to Desi."

In Arkansas' 62-61 overtime victory at Georgia Tech last Monday night, Sills was 1 of 3 on 3-pointers. He finished with 11 points and hit 4 of 6 shots in the lane, including two baskets late in the second half when he drove inside against James Banks, the Yellow Jackets' 6-10 senior center.

"With Banks, I knew he had four fouls and I was trying to get him fouled out," Sills said. "I tried to go through his chest, but obviously they didn't call the [fouls].

"My mentality is, I'm not making [3-point] shots right now, so I've got to find other ways to score the ball. That's one way -- attacking the rim."