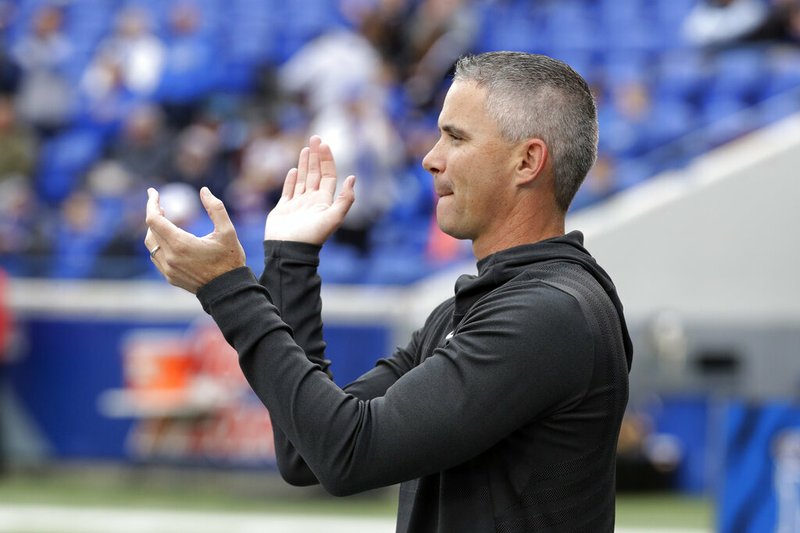 FAYETTEVILLE -- Three of the men thought to be at or near the top of the University of Arkansas' search for a head football coach will be leading their teams into conference title games this weekend.

Memphis coach Mike Norvell, perhaps the hottest up-and-coming college coach, will match his No. 16 Tigers against No. 21 Cincinnati in the American Athletic Conference championship game at the Liberty Bowl in Memphis. The game will be a rematch of Friday's 34-24 victory for the Tigers, which was also played in Memphis.

Boise State coach Bryan Harsin and the No. 19 Broncos (11-1) will take on Hawaii (9-4) in the Mountain West championship game on the blue turf at Albertson's Stadium in Boise, Idaho, on Saturday.

Other top candidates such as Iowa State's Matt Campbell, Washington State's Mike Leach and Auburn's Gus Malzahn wrapped up their regular seasons over the weekend and are awaiting bowl announcements on Sunday.

Kiffin, 44, is the son of well-regarded defensive guru Monte Kiffin, who was defensive coordinator at Arkansas (1977-79) for a three-year period in which the Razorbacks went 30-5-1 in their first three seasons under Lou Holtz.

Lane Kiffin was a finalist for head coach at the University of Houston in December 2016, when Yurachek, then the Cougars athletic director, selected in-house candidate Major Applewhite, the team's offensive coordinator under Tom Herman.

The Owls drew an announced crowd of 13,414 for Saturday's 34-17 win over Southern Miss, which clinched the outright C-USA East Division title for Florida Atlantic with a 7-1 record over Marshall and Western Kentucky, who each finished 6-2.

Kiffin has been on three national championship teams at USC and Alabama and coached two Heisman Trophy winners in Reggie Bush (2005) and Derrick Henry (2015).

Norvell, 38, is thought to be in the running for Florida State's head coaching vacancy. He was a candidate for the Arkansas opening in 2017 that went to Chad Morris, who was fired by Yurachek on Nov. 10 with a 4-18 record.

The Tigers are in the driver's seat to claim the automatic spot from the Group of 5 teams for the New Year's Six bowls. The highest-ranked team from among the Group of 5 conferences in the final College Football Playoff (CFP) rankings next Sunday earns that berth, and the Tigers would likely clinch it with another victory over Cincinnati.

Harsin, 43, a Boise native and alumnus of Boise State, has the Broncos in a strong position to slide into that New Year's Six spot if Memphis loses to Cincinnati in the rematch and the Broncos defeat Hawaii. Boise State was No. 20, two spots behind Memphis and one spot behind Cincinnati in last week's CFP rankings.

Harsin is 70-21 in seven seasons at Arkansas State and Boise State, including five seasons of 10 or more wins in six years with the Broncos.

There was considerable chatter in coaching circles regarding Harsin's candidacy at Arkansas over the weekend. Harsin led Arkansas State to a 7-5 record in his only season with the Red Wolves after taking over for Malzahn in 2013.

Malzahn, the top candidate for the Arkansas search to replace Bret Bielema in 2017, was thought to be a possibility again this time around. However, the Tigers' 48-45 victory over Alabama in the Iron Bowl on Saturday likely ended that scenario.

Campbell, who turned 40 on Black Friday, led the Cyclones to a 7-5 season after Saturday's 27-17 loss at Kansas State. Campbell is 62-39 in eight-plus seasons at Toledo and Iowa State. His 2015 team at Toledo shocked the Razorbacks 16-12 in Little Rock in Bielema's best season at Arkansas.

Leach, 58, wrapped up his eighth regular season at Washington State with a 6-6 record after Friday's 31-13 loss to Washington in the annual Apple Cup game.