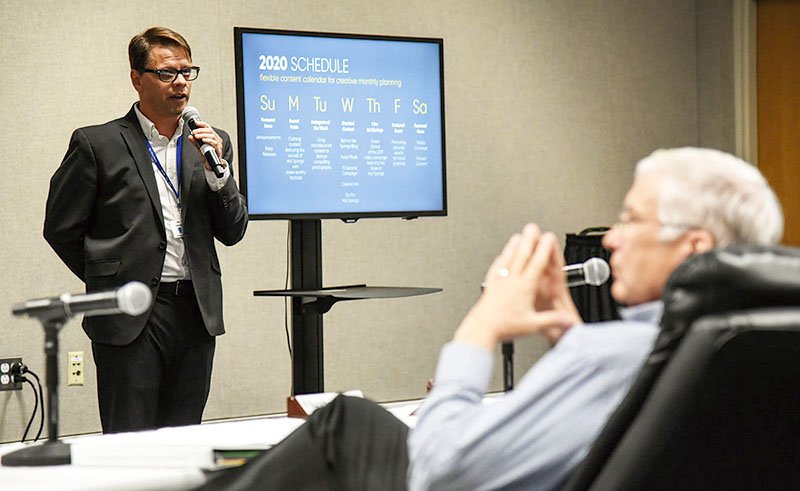 The Hot Springs Advertising and Promotion Commission approved its 2020 budget and the city's 2020 marketing plan following a presentation by CJRW of Little Rock at its December meeting on Monday.

Arrison said major changes include health insurance increasing 7.9% for the second year in a row and payroll increasing by $100,000 due to 2020 being a leap year and adding a pay period.

He said retirement has stayed the same at 15.32% of gross wages through the Arkansas Public Employees Retirement System.

Arrison said notable additions include a sales position that will focus on the "small meetings market" and an assistant director of operations position.

"The Majestic Park bond payments are in this budget, we'll be paying $395,177 in 2020, which is a new expense for us," he said. "We increased our budget ... we're trying to pay off the money we borrowed from our restricted funds for our lighting project. We still have $510,000 remaining that we owe on the original $2.2 million.

"We've increased our electric budget by $20,000 a month, so hopefully we'll be paying that off soon, or at least a lot quicker than we are now. As you know, what they told us, the rates have gone up more than we thought, so the payoff has taken us a little longer than we anticipated," he said.

Arrison noted two new departments have been added to the budget.

The commission has had the budget since its November meeting, and there was no follow-up discussion.

Part of the 2020 marketing plan was presented by the CJRW team and Bill Solleder, Visit Hot Springs' director of marketing. Overall, the marketing budget is more than $3 million, with CJRW's portion accounting for a little more than $1 million of that total, according to Arrison.

"Hot Springs is indeed different and unique. Certainly, through the years, it has had great success, continues to do so," CJRW CEO and Chairman Darin Gray said. "It's hard not to get excited when we're dealing with and partnering with the number one tourist destination in Arkansas. You are definitely setting the benchmarks across the state. ... Certainly those things don't just happen; it comes about with teamwork, long-term strategies."

Solleder also reviewed the 2020 social media schedule, noting that Wednesdays will be a "big day" for them.

"If you're on social media, or on one day a week, Wednesday is the day to do it," he said. "We'll release the Behind the Springs blog on Wednesdays, Feastmode will be released once a month on Wednesdays, the 15-second ad campaign will get love in our feeds on Wednesdays and Checkin' Inn... basically Feastmode, but instead of our wonderful restaurants and signature dishes, it's our great and unique places to stay."