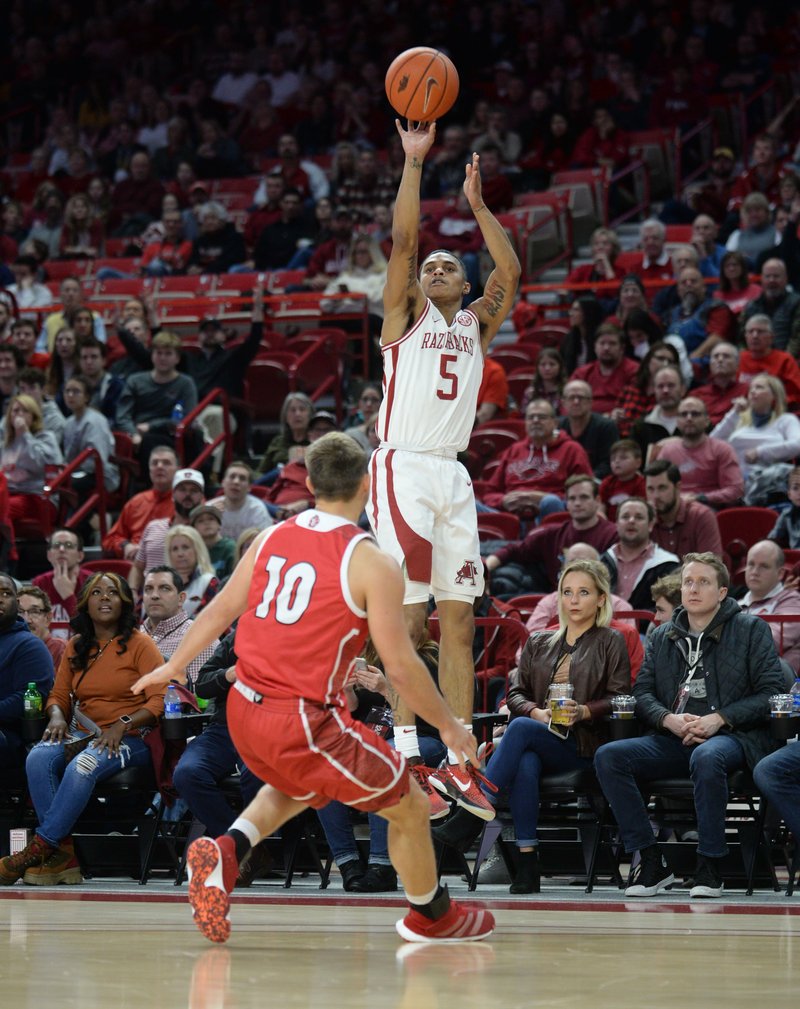 FAYETTEVILLE -- The University of Arkansas basketball team is struggling to make 3-point shots almost as much as its opponents.

On the other side of the ball, Arkansas ranks 337th in 3-point shooting out of 350 NCAA Division I teams.

"Our 3-point shooting is a humongous concern right now," Razorbacks coach Eric Musselman said. "It's night after night after night -- and it's hard to win games when you shoot in the teens from three-point land."

"When you're not making a high volume of threes it's, 'What's the factor?'" Musselman said. "Do we need to run better sets? Is it that we're taking too quick a shot?

"Is the pass on target? Are you shot-ready as a player? Is the shot too deep?

"All those are things that we just continually talk to our guys about. and we've got to try to search as a staff to come up with answers as well."

Hitting 3-pointers figures to be key for Arkansas' success -- especially once SEC play begins -- because the Razorbacks lack size. Among the seven players averaging at least 17.5 minutes, the tallest are 6-8 sophomore Reggie Chaney and 6-6 senior Adrio Bailey.

"If we start clicking from three, I think we'll be that much harder [to beat]," Musselman said. "If we keep clanking them. we've got to be really good defensively."

But so far none of the four have shot as well percentage-wise on 3-pointers as last season.

Jones, who is questionable for tonight's game because of a shoulder injury that kept him out against Northern Kentucky, has hit 29% (9 of 31) on 3-pointers after shooting 36.5% (76 of 208) last season.

Credit Jones with hitting a game-winning 3-pointer that banked in to lift Arkansa to a 62-61 overtime victory at Georgia Tech last week.

"Obviously, when Isaiah shoots, you think it's going in every time," Musselman said.

When Joe scored a season-high 33 points against Texas Southern before his three-game struggle, he had 29 points in the second half and shot 6 of 9 on 3-pointers.

"I'm pretty sure everybody knows he can shoot and knock down shots," Arkansas senior guard Jimmy Whitt said. "Everybody knows at some point he's going to knock them down again, so it's nothing we worry about."

Joe shot 2 of 10 on 3-pointers against Northern Kentucky, but Norse coach Darrin Horn was full of praise. Horn was a Texas assistant coach last season when the Longhorns opened with a 73-71 overtime victory against the Razorbacks and Joe hit 5 of 8 3-pointers in his college debut

"One thing for sure, shooters shoot, and I'm going to keep on shooting," Sills said. "Eventually they're going to fall. Coach Musselman told me to keep my confidence, keep shooting. I've just got to keep my head up."

Musselman said the coaching staff have gone over video with Sills of his 3-pointers.

"We lelt like he was kind of floating and not leaving in the same spot that he took off from on his jump shot," Musselman said. "That's one of the things we've talked to him about.

Musselman smiled when asked if he wants Sills to keep shooting 3-pointers.

"The lid's got to come off sooner or later," Musselman said.

"Certainly we hope he regains his confidence," Musselman said. "I think right now he's going through a confidence issue.

"With any player you hope they come out of it if they are in a little bit of a slump or whatever you want to call it."

The Razorbacks have gotten a slight 3-point shooting boost from Bailey and junior guard Jalen Harris.

But what the Razorbacks really need to bolster their perimeter scoring is for Joe and Sills to regain the shooting touch they showed as freshmen.

"When you look at the body of work with Isaiah and Desi and how they shot the ball last year, you think it's going to turn around for both of them," Musselman said. "Because they're both really good shooters and they both work on their craft."