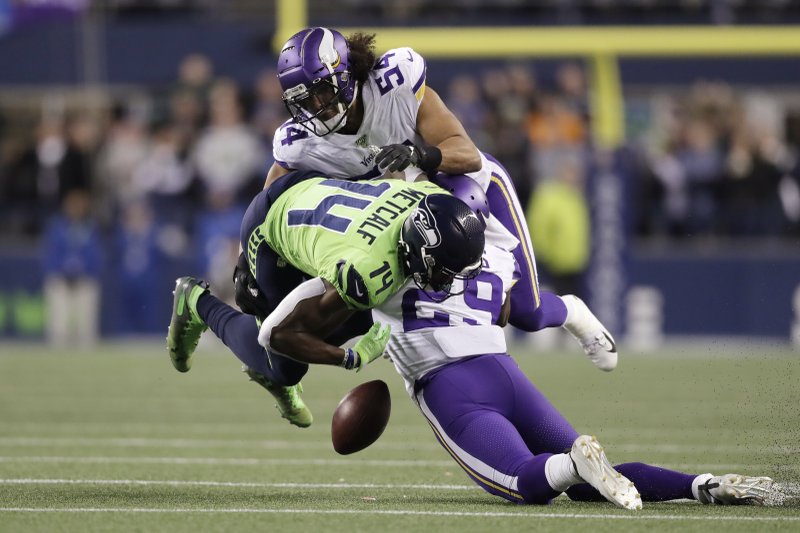 Seattle Seahawks' DK Metcalf (14) fumbles while being hit by Minnesota Vikings' Xavier Rhodes (29) and Eric Kendricks (54) during the second half of Monday's game in Seattle. The Vikings' recovered on the play. - Photo by John Froschauer of The Associated Press

SEATTLE -- Rashaad Penny scored one touchdown rushing and one receiving, Russell Wilson hit David Moore for a 60-yard TD pass, and the Seattle Seahawks built a big second-half lead before holding off the Minnesota Vikings for a 37-30 win Monday night.

Seattle (10-2) moved into a tie with San Francisco atop of the NFC West but holds the tiebreaker. The Seahawks have the inside track to the division title with four games left.

"Just couldn't be more excited to have that kind of win and put us at 10 wins, that's a nice spot for this time," Seattle coach Pete Carroll said. "We kick it into the fourth quarter and now it's finish time."

Minnesota (8-4) fell a game behind Green Bay in the NFC North and is only one game ahead of the Los Angeles Rams in the wild-card race. They may have lost star running back Dalvin Cook to a shoulder injury when he fumbled midway through the third quarter in what became a major turning point.

Wilson wasn't great, but he came up with key plays as Seattle won its fifth straight. He had a forgettable first-half moment trying to bat down a deflected pass only to watch Anthony Harris intercept the ball and return it for a touchdown. Wilson was 21 of 31 for 240 yards.

The key was the running of Penny and Chris Carson. Seattle rushed for 218 yards, the most allowed by Minnesota this season. Carson had 102, including a 1-yard TD. Penny added 74. The Vikings were giving up just 94 yards per game rushing.

"Our running game has been a staple of our offense. That's our foundation and both of those guys are amazing back. They're really coming on," Seattle offensive lineman Duane Brown said.

Minnesota quarterback Kirk Cousins was 22 of 38 for 276 yards but couldn't connect with Irv Smith Jr. on fourth-and-3 at the Vikings 42 with 2:31 left. Jason Myers' 36-yard field goal with 21 seconds left provided the final margin for Seattle.

"I think we have a football team that can go on the road in a tough environment and get a win. I think this is an opportunity we missed. It's disappointing," Cousins said.

It was a wild second half featuring 40 combined points and four key turnovers -- three by Minnesota.

Seattle pulled even at 17 on Penny's 1-yard TD run. On Minnesota's first play of the next possession, Cook was stripped by Rasheem Green, and Bradley McDougald recovered. It was the first of two critical turnovers that led to 10 points for Seattle.

The Seahawks were held to a field goal following Cook's fumble but took a 27-17 lead on their next possession when Moore ran free through the Vikings secondary and Wilson hit him in stride. Minnesota cornerback Xavier Rhodes appeared to think he had safety help over the top, but no one was there as Moore sprinted for his second TD catch of the season on the next-to-last play of the third quarter.

The first play of the fourth quarter was forgettable for the Vikings as well. Cousins' pass for Stefon Diggs was intercepted by Tre Flowers, who may have gotten away with pass interference, but deflected the pass and made a juggling interception at the Minnesota 25. Three plays later, Wilson hit Penny on a screen pass and Seattle had a 17-point lead.

Minnesota's rally started with Seattle's own blown coverage as Cousins hit Laquon Treadwell for a 58-yard TD from Cousins. Seattle seemed poised to add on, helped by a fake punt that Travis Homer took for 29 yards, but DK Metcalf fumbled and the Vikings recovered at their 28 with 9:34 left.

It took barely 2 minutes for Minnesota to pull within 34-30 as Cousins hit Kyle Rudolph for a 3-yard touchdown and another brilliant one-handed catch by the Vikings' tight end. But that was as close as Minnesota would get.

Vikings left tackle Riley Reiff suffered a concussion early in the second half and was ruled out. Cook immediately went to the locker room after his fumble with a shoulder injury and did not return.

Seahawks: Travel to Los Angeles to face the Rams on Sunday night.