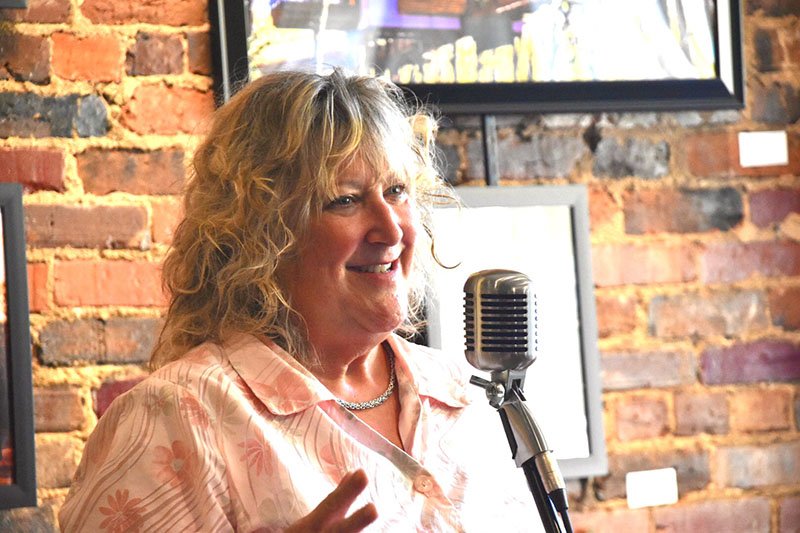 The regular open mic session for all poets will begin at 6:30 p.m. Leonard will begin her feature set at 7:15 p.m., followed by another round of open mic. Admission is free and open to all ages.

A recent transplant to Hot Springs, Leonard was born in upstate New York during a raging snowstorm and moved to California as a child with her parents and sister. She lived in Claremont, Calif., most of her life where she raised two sons and worked as a middle school English teacher until her retirement. She moved to Hot Springs in 2017 to care for her ailing father. Leonard holds degrees from Loma Linda University and the University of La Verne, and worked in the field of Occupational Therapy before becoming a credentialed teacher.

Leonard attends poetry workshops on a regular basis, and was an active member of two poetry groups in California: Ravens, and Foothill Poets. She cites Sharon Olds, Leonard Cohen, William Stafford, Sylvia Plath, and Mary Oliver as poets who inspire her. Her poems have been published in Alta Dena Poetry Review, California Quarterly, Pegasus, and other print collections in the San Gabriel Valley. Her poem "Cadaver Bone" was the second prize winner in the Lois J. Dalton Memorial Humanity Category in the 2012 California Federation of Chaparral Poets annual contest.

According to a news release, when asked about her poetry, Leonard said, "I wrote my first poem at age 8 on a birthday card I made for my beloved grandmother. I have always been in love with language, an avid reader, a bucktoothed word monger, whose favorite book was Webster's Dictionary. I wrote poetry all through my teens and 20s, but after marriage and motherhood ceased writing. The pressures of women to take care of the needs of others, at the sacrifice of their own artistic yearnings is great, and I fell into that place. After my divorce, I began attending weekly poetry workshops, and with joy, rediscovered my poetic voice. I write about my life-roles as a mother, as a teacher, a feminist woman, about my yearn for social justice, the beauty and lessons of our human brokenness, my need for a spiritual walk."

"Bud Kenny called her our California girl, and that name has carried over since I became the host; not just because Kathy is from California, but because she is a force of warmth and light, a true golden heart. Sharing that teaching aspect of our passions, I can feel Kathy's genuine care for humanity in her poignant and powerful poetry. I am so honored to feature her at WNP," host Kai Coggin said in the release. This will be the second time Leonard has been featured.

"I embrace literacy and poetry as agents of empowerment, of cathartic healing. A poem or a book connect us to our emotion and experience, to our truth. A single sentence has the power to change a person's life for the good. We need to understand that we are all storytellers, each with a sacred story to be told, and in the telling we find tribe, understanding, and meaning," Leonard said.

This week marks 1,610 consecutive Wednesdays of open mic poetry in downtown Hot Springs since Feb. 1, 1989, which is said to be the longest-running consecutive weekly poetry series in the country, the release said.

Email [email protected] for more information or to be considered as the featured poet.