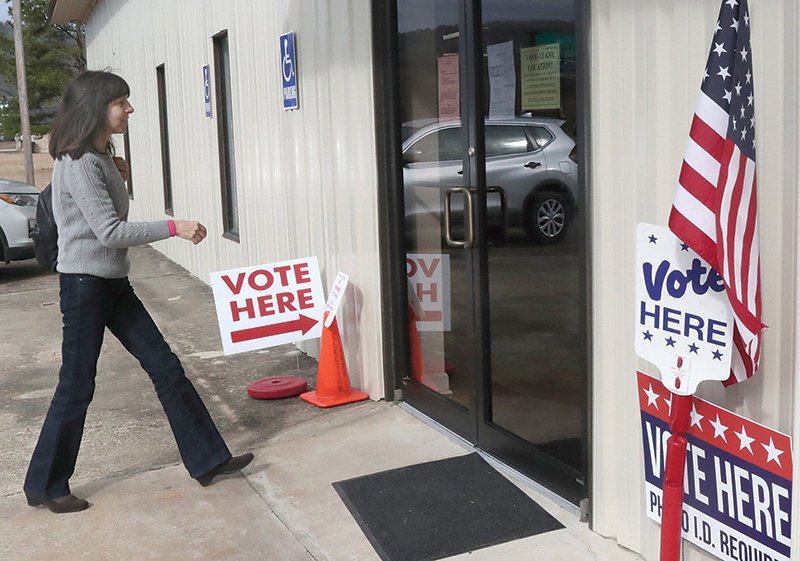 SPECIAL PRIMARY ELECTION Gabriela Hogue enters Community Baptist Church on Highway 7 north Monday to cast an early ballot in the Republican primary for the March 3 House District 22 special election. The church is one of five vote centers that will be open for today’s primary between Richard McGrew and Jack Wells. - Photo by Richard Rasmussen of The Sentinel-Record

Chances of sleet, snow and ice in today's forecast will not stop the Republican primary for the House District 22 special election, the Garland County Election Commission said Monday.

Voters can choose among five locations to cast ballots in today's contest between Justice of the Peace Richard McGrew and Jack Wells. The winner will face Hot Springs Village Libertarian Judy Bowers in the March 3 special election to serve the remainder of Mickey Gates' third term.

The House expelled Gates in October after he refused to resign following the no-contest plea he entered earlier this year to failing to pay state income taxes or file a return. He had more than 14 months remaining on his term when the House voted 88-4 in favor of his expulsion.

"We have an inclement weather policy that if all else fails, we'll open here even though it's not a polling place," Election Commission Chairman Gene Haley, referring to the election commission building at 649-A Ouachita Ave., said.

Haley said close to 17,000 Garland County voters are eligible to participate in today's primary. Most of them reside in the Village, he said. Fewer than 500 voters had checked in at the county's lone early voting location, Community Baptist Church, through more than four days of early voting, according to the tally the county's poll book software registered through Monday afternoon.

McGrew, the District 12 JP for Garland County, outspent Wells by a more than eight-to-one margin in non-filing fee expenses, according to his preelection report listing campaign contributions and expenses occurring up to 10 days before an election.

The campaign has been mostly self-funded, with McGrew reporting $34,000 in loans he's made to his election effort. He reported 11 individual contributions totaling $3,050 and $27,732 in expenses, including $6,000 in filing fees paid to the Republican Party of Arkansas.

The fees are for the March 3 special election and Nov. 3 general election. McGrew and Wells filed for both. The winner of the March 3 Republican Primary will represent the party in the November general election, with November's winner serving the 2021-22 term for District 22.

Wells, a member of the Jessieville School Board, reported $8,634 in expenses through November, including $6,000 in filings fees. His preelection report was filed Dec. 4, one day after the Dec. 3 deadline.

Wells, who resides in the Village and owns Sew Perfect Embroidery in Jessieville, reported 40 individual campaign contributions in October and November totaling $13,650. Most of the contributors listed Village addresses.

An ordinance adopted last month by the Garland County Quorum Court included a $16,000 transfer in the election commission's budget to pay poll workers for today's primary. Haley said the state will reimburse the county for the expense of the election.