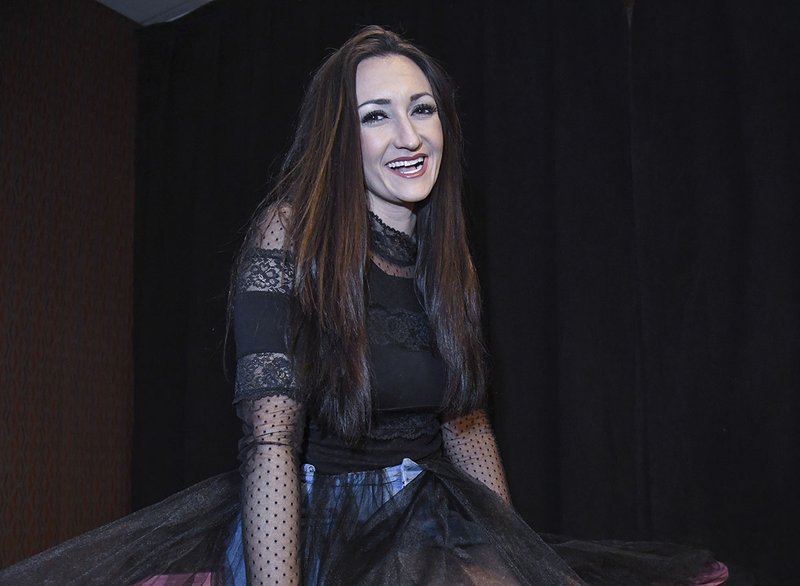 Performer Susan Erwin has her photo taken at Pop's Lounge inside Oaklawn Racing Casino Resort. - Photo by Grace Brown of the Sentinel-Record.

"I'm in a male-dominated field and have been for many years. There's no manual; there's no one there saying, 'Here's how you do it' or 'Here's the path to success.' It really is up to you to get up and set goals and find creative ways to survive at times," said Susan Erwin, frontwoman of the Pink Piano Show.

Growing up, Erwin dedicated herself to her piano lessons. As she trained her fingers to find the correct keys and craft the perfect melodies, a hobby she knew she could enjoy for the rest of her life took root. But at the time, that is all she thought playing the piano would ever become.

A native of Magnet Cove and a fourth-generation Arkansan, Erwin attended an honors college in central Arkansas and went on to pursue a career in engineering. After graduating, she secured a stable job in the corporate world and it appeared as if everything went according to her plan. However, Erwin admits she never felt fully satisfied. That is until she sat down in front of a piano.

"(My job) was wonderful, real-world experience in the corporate world but I always felt like I was a round peg in a square hole. I was there but not whole. I kind of felt like there was something else. I'm more of an entrepreneurial spirit than working for a corporation," Erwin said.

"When I found the piano and music as a lucrative option at that point in my life, I was ready to pursue that and to take full advantage of that career path," she said. 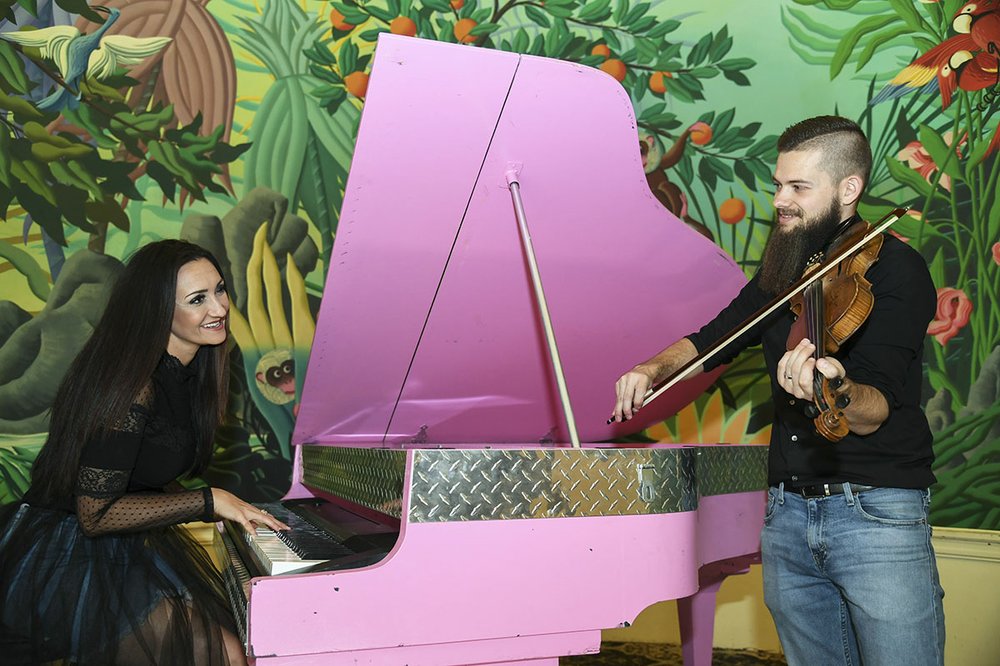 Performer Susan Erwin and her husband Cliff Prowse have their photo taken at The Arlington Hotel. - Photo by Grace Brown of the Sentinel-Record.

After an informal introduction to the world of dueling piano bars, Erwin secured a gig at Willie D's Rock & Roll Piano Bar in Little Rock. She spent the first part of her professional career there, learning all the most popular songs patrons enjoyed and how to engage her audience.

"I set goals for learning songs and learning how to do the format of the show itself. I want each show to be so entertaining and have the interactions that I enjoy. That was a skill set that I had to learn," she said.

Her performances rely heavily on her ability to engage her audience. Developing a good rapport with her audience right off the bat helps to launch her performance in the right direction and sets the stage for an engaging and entertaining show. Taking requests and exchanging witty banter with her audiences help round out her act. She said she works especially hard at making the women in her audience feel like they could be great friends, while also catching and holding the attention of the men.

"There's no training for that. You go in and hope to find someone that maybe mentors you and helps you learn that format, but many times that's not the case. You just have to figure it out by watching and learn to modify and adjust as you go along. You have to be willing to try different things. You definitely have to have an aptitude. I think there's a certain personality that you really kind of have to have to do this gig," Erwin said.

"It's all about finding your skin on stage," she said.

Working in a male-dominated industry without the guidance of a human resources department has led her to develop a thicker skin but still maintain a soft, feminine image. A skill she has spent years perfecting.

"How do you build a thick skin and stand up for yourself as a female but not come across as too harsh and too hard? You still need to be soft. You know, there's a lot to a persona of a female on stage. It's the way you're perceived (by) the crowd. Being a commanding and dominating personality without coming across as too hard or too masculine can be a challenge," she said.

Based on her experiences in such a male-centric industry, Erwin began connecting with other women in music. This not only allowed her to build stronger bonds with fellow performers but also provided her and several other women a safe space to talk shop and share their experiences. They call themselves the Piano Ladies and Erwin says they get together each year for a retreat.

"I think there's a lot of different challenges that can come (about), Ultimately, I think being a female (in the music industry) is a strength if you look at it from a holistic standpoint. You do have advantages," she said.

Soon enough, Erwin developed the skill and confidence to move forward with her career and relocate. While the decision proved a bit frightening, Erwin said she has always seen herself as a risk-taker. Her first big move landed her in Branson. Later on, Erwin found herself in the spotlight on major stages in Los Angles and Las Vegas.

"There was a pivotal point where I went from dueling pianos to doing what I'm doing now. I went to Branson and worked at Ernie Bigg's and then I moved to Los Angeles and worked at a club called Piano Piano. From there, I went to Las Vegas and found an agent who booked me all over the (Las Vegas) strip," she said.

While performing in Las Vegas, Erwin found an agent she felt worked well with her own vision for her career. This presented her the opportunity to finally branch out all on her own and begin a solo career. The newfound flexibility and freedom also prompted her to move back home and broaden her horizons.

"I started doing these gigs that allow travel. I began traveling to places like Amsterdam, the Caribbean, Norway, Spain, (and) Germany with my show. The really exciting part for me was not just the travel side of it, but being able to be in a solo setting where I did my own show by myself," she said.

"That's when I started branching out, recording an album in Nashville, and doing more of my own original music at shows," she continued.

In 2015, Erwin released a full-length album of songs she classifies as a mix of country and rockabilly. Soon after, she released a three-song EP album.

"My original sound is kind of rockabilly. A Jerry Lee Lewis kind of sound in my hands but definitely country music vocally. (I'm) somewhere between rock and country," she said.

One weekend she just happened to be in Arkansas, Erwin met her now-husband, Cliff Prowse. The two immediately began making music together. The pair met during a rehearsal in Little Rock after they both got booked to play Willy D's Rock & Roll Piano Bar on the same weekend. The first time she heard him play, Erwin claims she was blown away by his talent.

"I had a project at that time that I was working on and asked him to be a part of. So we started working together on that and I learned what a great fit he was to the show," she said.

Cliff jumped right into performing with Erwin's show and eventually began to travel with her as well. From a music standpoint, Erwin admits it happened pretty quickly but there was no denying chemistry and talent they shared on stage. As they spent more and more time together, they fell in love and decided to get married. His fiddle and guitar now accompany the show wherever they travel. 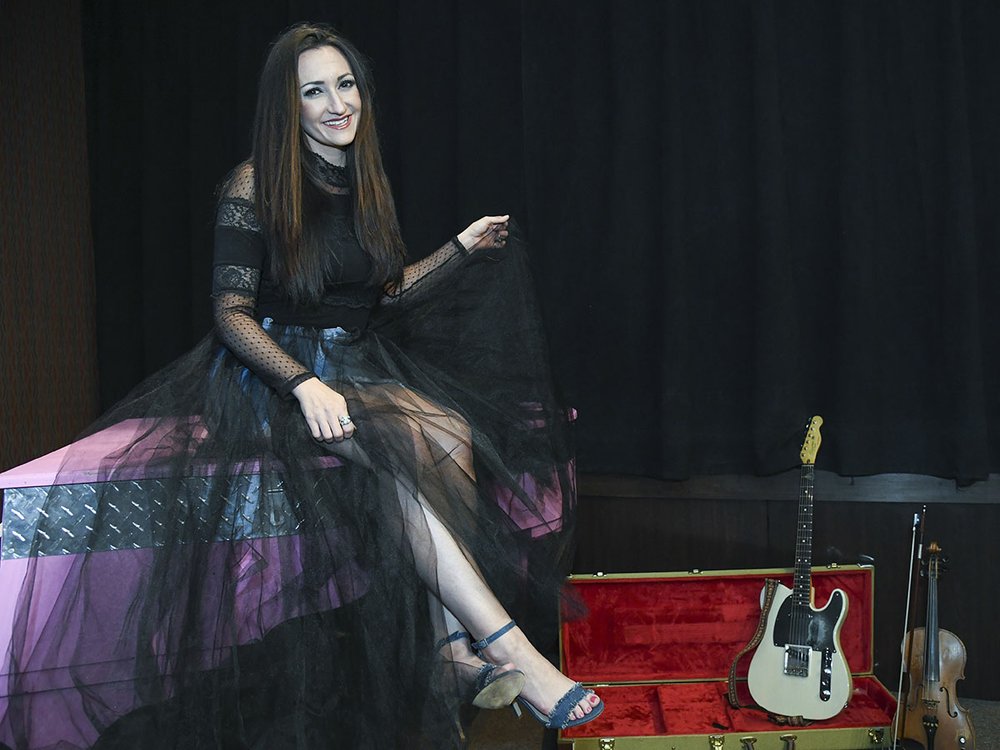 Performer Susan Erwin has her photo taken at Pop's Lounge inside Oaklawn Racing Casino Resort. - Photo by Grace Brown of the Sentinel-Record.

"It is awesome to be able to travel and do together. We're constantly writing new music now and learning new music together. That's an extra incentive. It's inspiring to have a partner now instead of just being by yourself," she said.

Erwin and her husband spend about six to eight months out of the year traveling both stateside and abroad with their show. During her travels prior to meeting her husband, Erwin came across a venue in Santa Barbara focused on color branding. The idea stuck with her and she decided to put her own spin on it with a pink piano for her shows in Arkansas.

"So I was at home and I kept thinking, 'Why do I have to come to Arkansas and not be able to do my show?' I mean, I do these shows that I've flown all over the world to do, but why can't I do it in Arkansas," she said.

Her first challenge came after realizing she did not have a venue. However, her tenacity led her to create a show that would fit in with the venues already around Hot Springs. Her show runs in Pop's Lounge at Oaklawn Racing Casino Resort during the live race meet and the Arlington Resort Hotel & Spa every Friday and Saturday in December.

Their all-request show maintains high energy that the duo cultivates and maintains four hours on end.

"Interacting with the crowd is the core element. This is in my DNA as a performer. I could never just sit there and play music and stare at a crowd. I have to connect with the crowd. That's what I would say sets Cliff and (me) apart. We are very interactive," she said.

Today, the duo has over 1,500 songs in their arsenal and work to add new ones each week. Currently, Erwin said they are working on learning some of Lizzo's music since it is in such high demand. They also have an album in the works.

On New Year's Eve, they will perform inside Silk's Lounge at Oaklawn. Erwin says they are also available for events and private parties. For more information about her act and details on her performance schedule, visit http://www.susanerwin.com

Print Headline: A Passion for Piano Susan Erwin and her Pink Piano Show