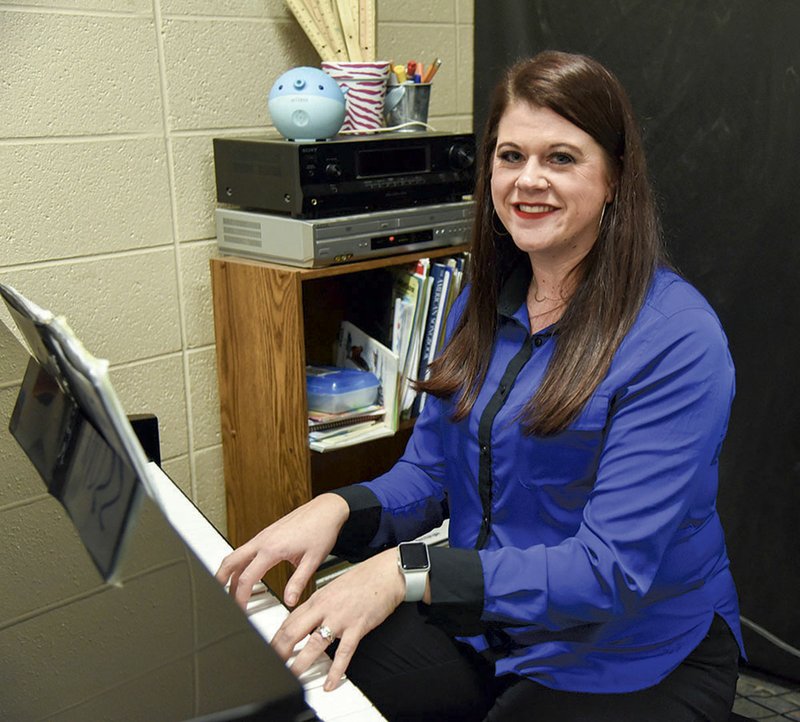 Lakeside Middle School choir teacher Amber Moss has her portrait taken at her piano inside of her classroom. - Photo by Grace Brown of the Sentinel-Record.

Lakeside Middle School music teacher Amber Moss is a semifinalist for the Grammy Music Educator Award after being anonymously nominated and passing nearly 4,000 other nominees.

The award is in its seventh year. Moss said she has been nominated the past six years by an unknown person.

"There's thousands upon thousands of music teachers who are nominated every year; I've been nominated (most) year(s), but I always get the email that is like 'Thanks, you were nominated, good job,'" she said. "But then this year I got an email that said I was a quarterfinalist. So that was in May and that was the top 189 people, I think. And then they cut that from 189 to 25. So I got an email in September that said I was a semifinalist, and I will find out in the next couple of weeks if I made the top 10."

Moss said there were five music educators from Arkansas who were quarterfinalists, and she was the only middle school teacher, but now she is the only person from Arkansas that is in the semifinals.

Moss said she has no idea what she did to be nominated.

"This is my fourth district to teach in and the district I taught in before Lakeside there was a kid who nominated me, and I keep wondering 'Hmm, maybe he keeps nominating me,'" she said.

"On this year's list there's actually some elementary and middle school and I think that's a big deal because that kind of shows that we're just as (much of) a presence, if not more because we're laying the foundational work," she said. " ... They're (kids are) coming at you (high school and college educators) with nothing, and then when they get here they've had all of these years of experience, and you just basically get to polish the pot. So you haven't formed and molded it, you're just kind of putting the finishing touches on it."

"Not to degrade what they're doing, that's not it, but just saying each content should be looked at as its own rather than against each other," Moss added regarding the Grammy Award judging all grade levels on the same scale. 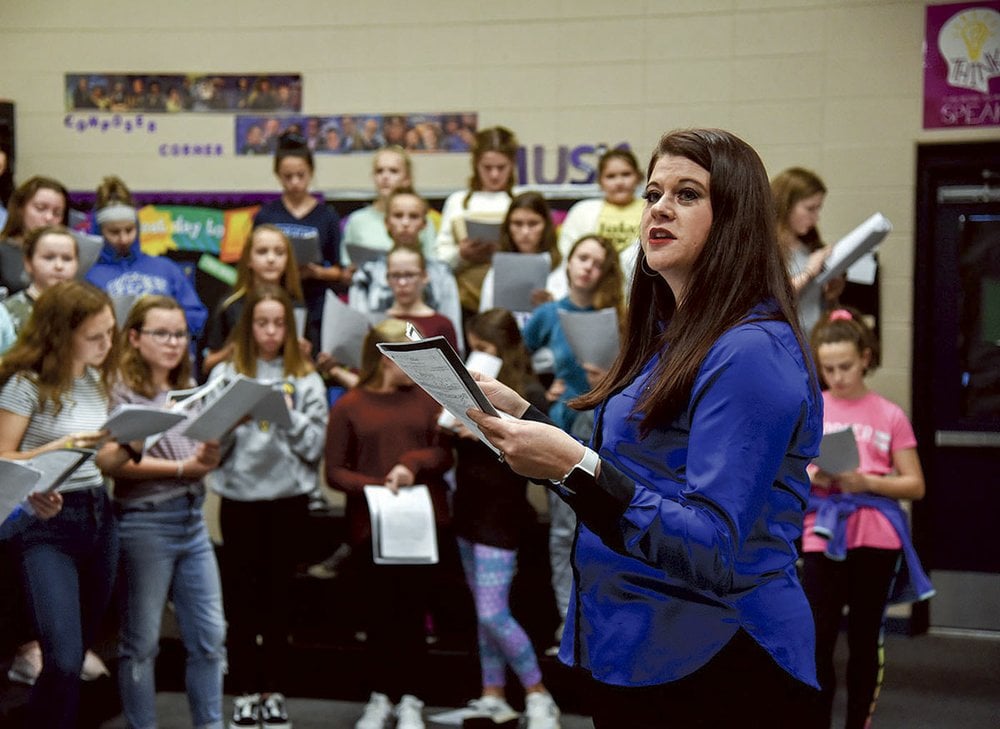 She said she thinks the award is an advocacy tool for music education.

"There's proven data that schools with the arts, that have a huge driving force of the arts, are more successful, even in their test scores than schools that don't."

Moss said when the Grammy Awards recognize a music educator it is solidifying that music education is important.

Moss said Mrs. Neill, her piano teacher growing up, is who impacted her musical technique the most.

"She taught me piano from third grade until I went to college, and I didn't know this, but there was a lady who was paying for my piano lessons because I didn't come from a very wealthy family at all," she said. "Growing up it was special when we got to do those types of things, but the lady had stopped paying for those lessons and my piano teacher didn't tell and taught me for probably seven years without payment," Moss said.

"Music comes naturally, and I love it so much, so I decided to major in it so I got a full ride to UCA, so I went four years there and I've been teaching ever since," she said. "I've taught in several different districts just by life changes, so I've never really had to leave somewhere because I didn't like it," she said.

"I think that's kind of made me who I am as a music teacher, too ... because I've taught basically all backgrounds that you can imagine in Arkansas," she said.

Moss currently teaches music, choir, and theater. She has taught grades K-12 but said her favorite grade range to teach is middle school.

"I like the gap, just how they learn," she said. "My day to day I teach a lot of music, and in one day I will see probably 400 kids a day, which is a lot. I love what I do because I get to hang out with kids and be passionate about music. Who doesn't love music? That's what I tell them all the time: You might not love what we're doing here, but I know you love music and I will find a way. If it's not reading it, if it's playing it, we will find a way. I will find something you love about it."

"When I was younger everyone did piano lessons or guitar lessons or you did private lessons on top of whatever you did at school, and I think we've gotten away from that a little bit, so the only chance these kids have to participate at music is at school," she said. "I just like those 'aha' moments of that spark of life because we don't really communicate face-to-face anymore and music is a really good way to do that, so probably just working with the kids and seeing them light up." 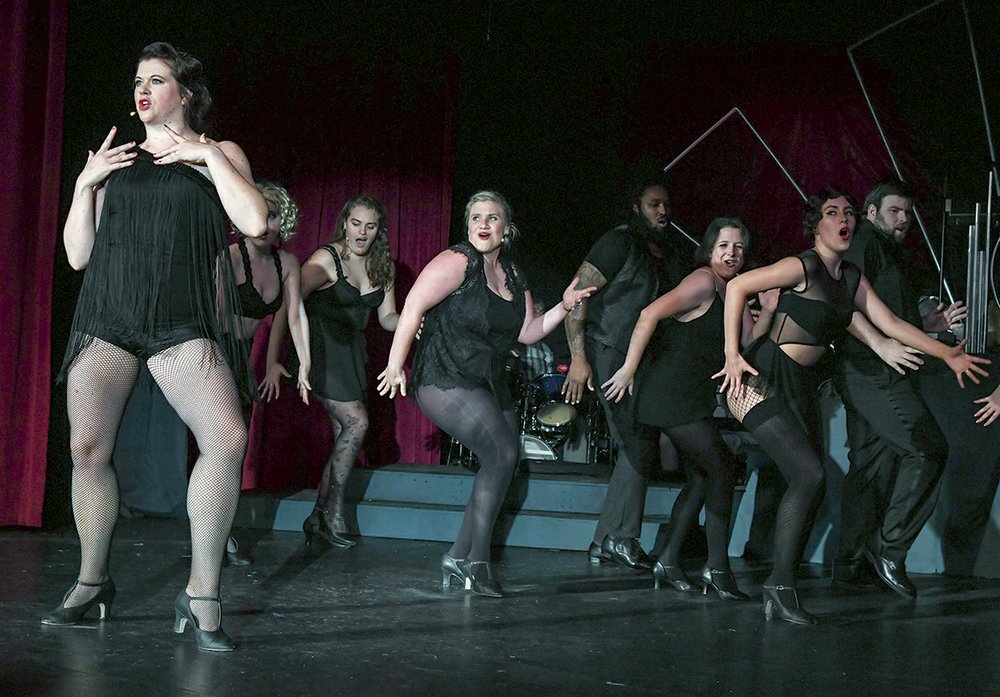 Amber Moss rehearses a scene from the Pocket Community Theatre's production of "Chicago." - Photo by Grace Brown of the Sentinel-Record.

"If you really pour down into the depths of it, there's always a beat just like there's a heartbeat in your soul," she said. "Everybody loves it, so for someone to be like 'Oh, I don't like music,' they're not telling the truth."

Moss said her "stellar musician" husband is one of her motivations, but other people's success is her main motivator.

"I want to empower people," she said. "I really like to pour into others, and I know that's probably not the norm, but other people are what motivate me, and when other people are successful, that's what makes me thrive."

"I think that it's really cool to just be a semifinalist because out of almost 4,000 people that were nominated I'm in the top 25," she said. "So I think even being here I'm super, super humbled and freaked out because I'm like 'this is amazing.' Even without the Grammy right now I'm stoked."

If Moss wins the competition she will be taken to the award show to receive the award and she will get to spend five days in Los Angeles.

"For any music person, a Grammy is like the epitome of your success," she said. "To have that would be unreal, and even when I talk out loud I think 'there's no way.' The top 25 is good, but people keep saying 'Oh we just have a feeling, it's going to be you.' Which would be crazy, that a girl from Arkansas walked into LA and said 'Hey.'"