Today's Paper Obits Mugshots Sports Classifieds Jobs HER Magazine Crime Contact us Subscribe to our newsletters Activate
ADVERTISEMENT
What can dance do for you? by Cassidy Kendall HER Magazine | December 15, 2019 at 3:00 a.m. 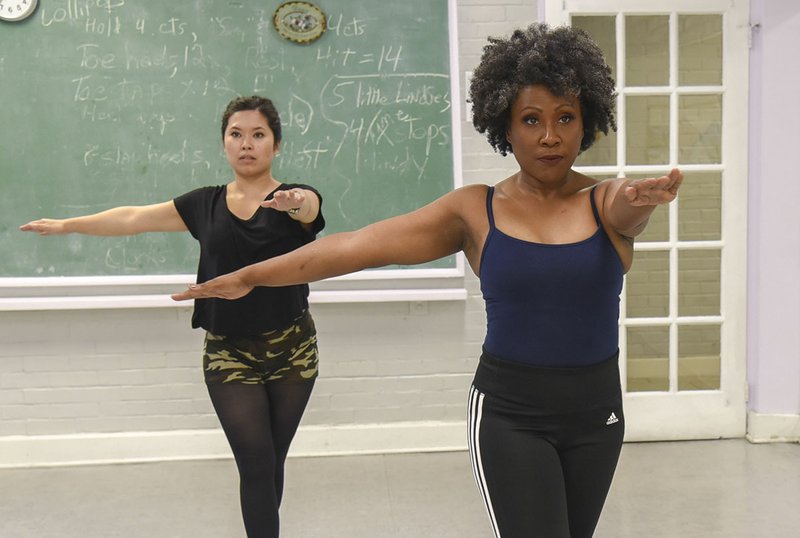 Sonja Littlejohn Barlow leads a warm-up during a private dance lesson at the Quapaw Community Center. - Photo by Grace Brown of the Sentinel-Record.

Sonja Littlejohn Barlow -- more familiarly known as Gracie -- is a local dance instructor who believes in dance to benefit not only physical health but confidence, brain stabilization and emotional expression.

Barlow said no matter how old, what race or how "left-footed" one believes themselves to be, dance can benefit anyone.

Barlow said she has some students who take her classes just to increase their confidence.

"A lot of them tell me when they walk around town people ask them, 'What are you doing? You look so good.' And they can't get it because it's internal," she said. "All of a sudden your body just becomes erect and you start walking. It has nothing to do with 'I'm a dancer,' but 'I feel good. I feel good about myself and what I'm accomplishing,' and that's what it does for people."

Barlow said she tells her students they need to acquire a "theme song" for when they walk. 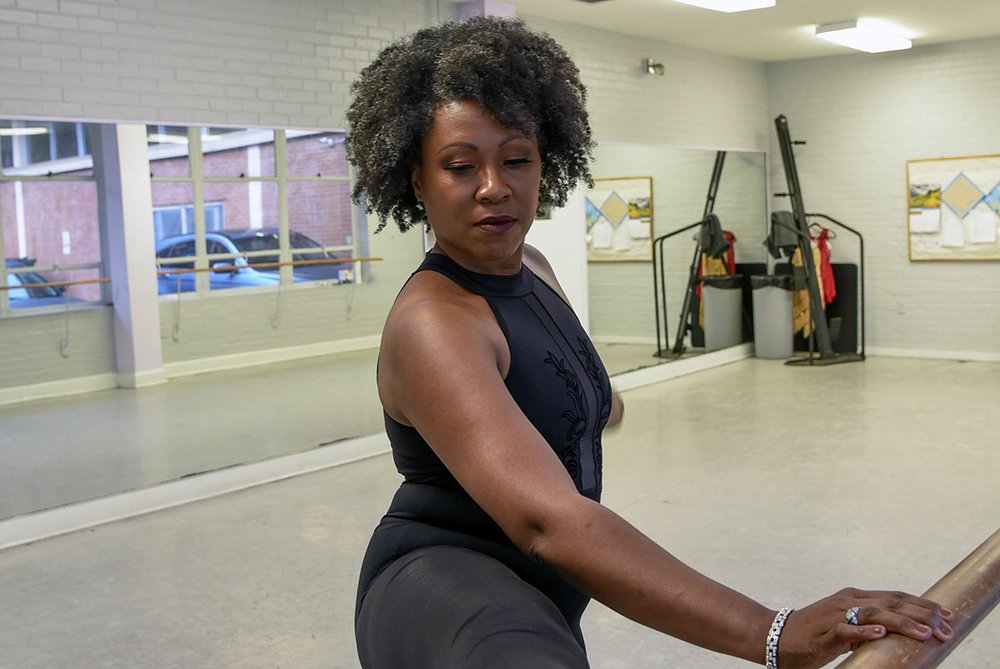 Sonja Littlejohn Barlow warms-up before a private dance lesson at the Quapaw Community Center. - Photo by Grace Brown of the Sentinel-Record.

When teaching her students a new dance, Barlow said she can visibly see their confidence when an uncontrollable smile comes across their face as they get it.

Barlow said she can remember a dance teacher she had as a child that was her role model in what a confident dancer looked like.

"Looking back and remembering what she looked like, she had to be in her 60s, but she was the most beautiful woman I'd ever seen," she said. "The way she carried herself and the way she expressed herself, and I thought 'That's the way I want to be seen. How I want to be able to communicate to people.'"

After growing up and facing hardships life brought her through, Barlow said dance gave her the confidence to push through.

"It was like no matter what was crumbling around, I could handle it because I had inner strength, and it built my inner strength again," she said.

Barlow said she has also had students take her classes to therapeutically "balance their brain."

She recalled an article she read that stated scientists are studying dancers by putting electrodes on their brains and body to see how they function, concluding that dance is the only form of exercise where you use the "right" and "left" brain at the same time.

"It's unthinkable because everyone always says your right brain or left brain, (but) not when you're a dancer -- you're using your full brain," Barlow said. "You're jumping up in the air with power, you're landing with such softness. At the same time you're expressing in your face an emotion, and also thinking of the movement. The movement can be counterbalanced, counter-turned. When you're jumping you're jumping up, out, pulling down at the same time."

After suffering from a dancing-related injury, Barlow said she got to experience the exercise dance provides the brain when she had to approach a more challenging form of dance: Flamenco dancing.

"I started doing that and that was my challenge because it was with the castanets," she said. "I had never had castanets before. You had to play two different rhythms on your hand while your wrists are moving and your arms are moving in different directions and your feet are doing a different rhythm. It was so challenging that when people say that you have two left feet -- I felt like I had feet growing out of everywhere."

Barlow said flamenco dancing challenged her brain and temporarily made her feel like she lost her "rhythm."

"You have your own rhythm," she said she realized. "You have to find it and when you find it you find it's the same rhythm everyone else has, it's just maybe you were behind time a little bit, and when you caught up and got that movement going everybody says it looks seamless. So, I learned that from flamenco, I thought 'OK, I do have rhythm, I can do this.' That was working that right and left brain and I didn't know it at the time."

Barlow said dance is also a form of emotional expression.

"I have a love for dance; I have since I was seven years old and I choreograph for different shows," she said. "A lot of my choreography has to do with how I'm feeling emotionally. When I hear a song, how it makes me feel. Most people hear a song, they hear the words, they hear the beat. When I hear a song I picture a whole dance concept of how to express that. And it all comes from how to express your emotions. Some people like dance to say they can dance, but for me dance has always been a way to express your emotions, to say what you want to say without having to verbalize it; it's therapy."

"As soon as they can't express themselves with words, if a child throws themselves on the floor and rolls around until they're completely exhausted and then just falls in exhaustion, you know what they're feeling, and that's what dance is," she said.

Barlow said her dance has never been about doing a show or a performance, and if she never performed on a stage she would be fine, as long as she had that form of expression. 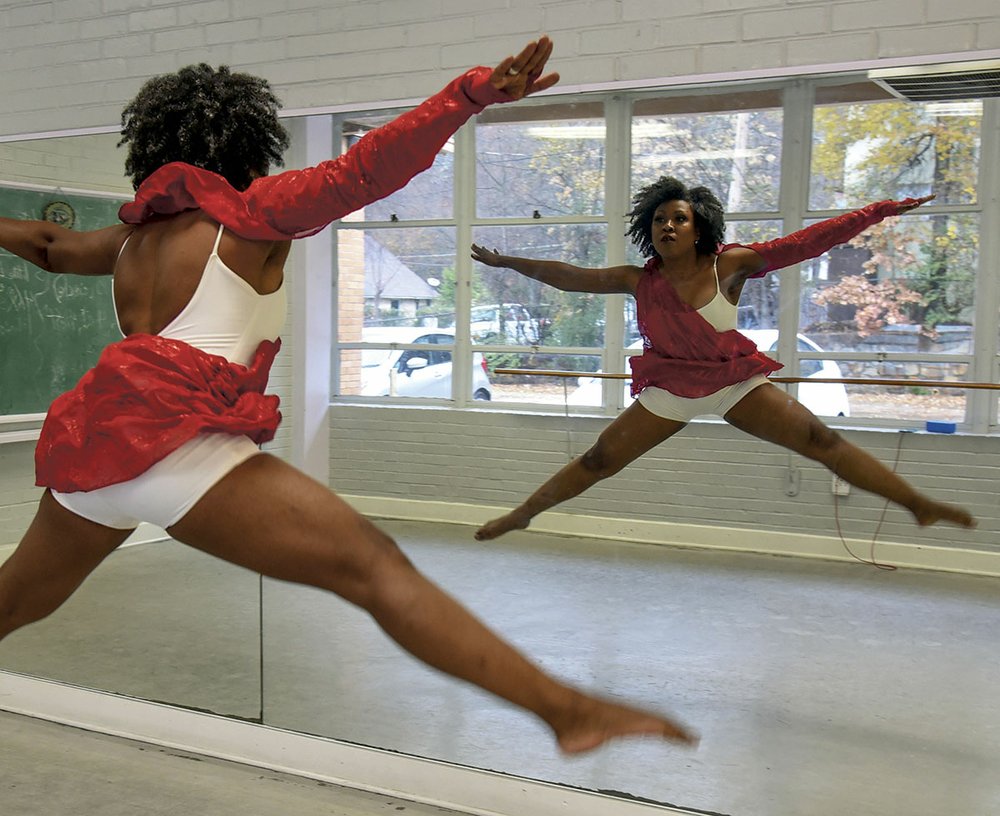 Sonja Littlejohn Barlow demonstrates a leap in the dance room of the Quapaw Community Center. - Photo by Grace Brown of the Sentinel-Record.

She said she learned dance was an expression of emotion from her childhood neighbor, and eccentric Arkansas native names Earnestine.

"Earnestine went to this African show (one day) and invited the whole cast back to her house," Barlow said. "She invited us over, and the whole cast from Africa did not speak English. They had their costumes on, they made all this food -- all these African dishes -- we went swimming, they sang songs, we danced, and right then and there I was like that's what I want to do. That's me, all because of Earnestine."

She said Earnestine had a beautiful picture in her bedroom of herself.

"She had all these feathers on her and she's dancing and I was like 'That's it right there, that's what I want to do,'" Barlow said. "That's what started my mind in theater, in dance, in anything to express emotion."

There was a time in Barlow's life she put dance aside to work, and this is when she realized the detriment to the lack of emotional expression.

"I stayed in California, got to 22 (years old), went through a little depression in not knowing how to express myself -- the things that were happening externally to me, I could not get that emotion out and internally it was harming me," she said. "So I went and got some therapy, and my prescription, instead of it being an antidepressant, he prescribed a dance class. My insurance paid for dance classes, it was hilarious."

"My West Coast instructor was the lead dancer of the Merv Griffin dancers -- beautiful dancer. Then, the ballroom instructor, was one of the judges for the international competitions," she said. "These were top people that I came in contact with. And that, again, is what dance does. I was back, emotionally, myself."

There was another time in Barlow's life when she had to rely on dance to pull her out of a depressive state after moving to Hot Springs without her spouse due to a sick family member in need.

"Again, depression was hitting because it was an unusual circumstance having to start life over again and not having your spouse with you in a town you don't know anybody or have any family," she said. "So I decided to go to the gym, maybe they have an aerobics class. So I go to the Hot Springs Fitness and I sign up there for there membership. I didn't want any weights, I didn't want track; I wanted the pool and they had a fitness dance class. It was enough for me to build some strength up. ... So I went there and got some strength back."

Barlow teaches a class at the Quapaw Community Center at varying times, and holds private lessons. She can be contacted through her personal Facebook page listed as "Sonja Littlejohn Barlow (Gracie)."

Print Headline: What can dance do for you?