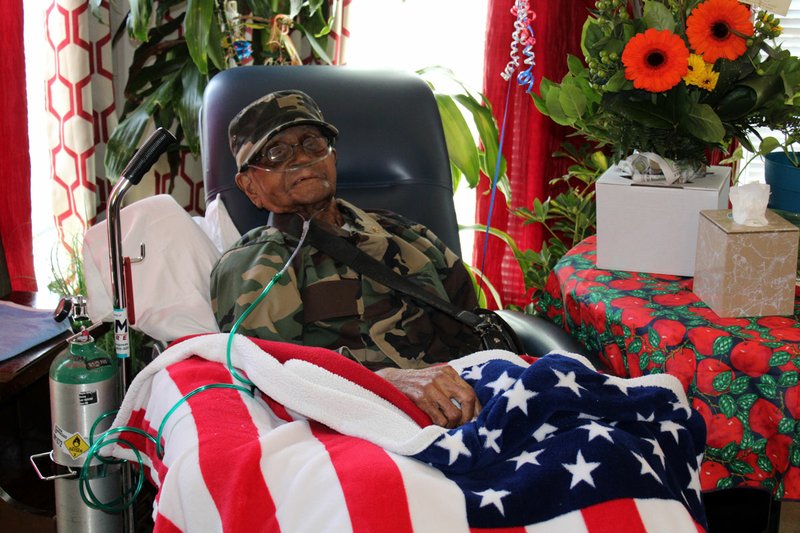 Benjamin Haymon celebrates his 110th birthday at his home in November. - File photo by The Sentinel-Record

The oldest World War II veteran in Arkansas was laid to rest Friday morning, leaving behind a legacy of achievement.

Tandra Spain said she will remember her grandfather for his kind and loving spirit as well as his distinction as the state's oldest veteran of World War II.

Scattered among Haymon's friends and family Friday were veterans and strangers who never met Haymon but felt the need to pay their respects to "the greatest generation," whose numbers shrink with each passing year.

According to the U.S. Department of Veterans Affairs statistics, 389,292 of the 16 million Americans who served in World War II are still alive. Around 294 World War II veterans die each day.

There are 3,694 living World War II veterans in Arkansas.

"It's tough to watch every one of them go," said Dwight Witcher, a Vietnam veteran who served in the Marine Corps. "These are the people who saved the world."

Haymon was born Nov. 8, 1909. He grew up in McKamie, in Lafayette County, the son of a farming family.

Haymon enlisted in the Army at age 31 in 1941, seven months before the attack on Pearl Harbor thrust the United States into World War II.

He served as a cook in Port Moresby, Australia, before reassignment to New Hebrides, now called Vanuatu, with the 159th Port Company.

In an interview in 2016, Haymon recalled the long nights at sea near New Hebrides, in the South Pacific Ocean, as artillery shells crashed around him.

"I was afraid," he said. "There were ships all around us getting hit."

Paul Garrett, a Marine Corps veteran who from the Vietnam War, said he can only imagine the things Haymon witnessed while serving during World War II.

"No words are adequate to express the appreciation for what he has done," Garrett said. "It's sad. It seems like every week we are watching one of (the World War II veterans) go."

Garrett said he never met Haymon, but he wanted to pay his respects to fellow "brother in arms" who served his country.

It's a sentiment shared by many who knew him, his granddaughter said.

"He was absolutely proud of his military service," Spain said. "To see how his service began and the way it ended, that is a true honor."

Most African Americans serving at the beginning of World War II were assigned to noncombat units and relegated to service duties, such as supply, maintenance and transportation, according to an article from the museum, but their work was vital to the effort as many drove for the "Red Ball Express," the convoy system that carried a half-million tons of supplies to allied forces moving through France.

Despite this, racial segregation remained rampant during World War II within the ranks -- a fact that weighed heavily on Haymon for many years, his granddaughter said.

"You could serve to fight, but you couldn't eat meals with your fellow soldiers," Spain said.

Spain pointed out Friday that veterans of various races were on hand to pay their respects to her grandfather.

"Life is about how you are remembered," she said. "It's not about how it began."