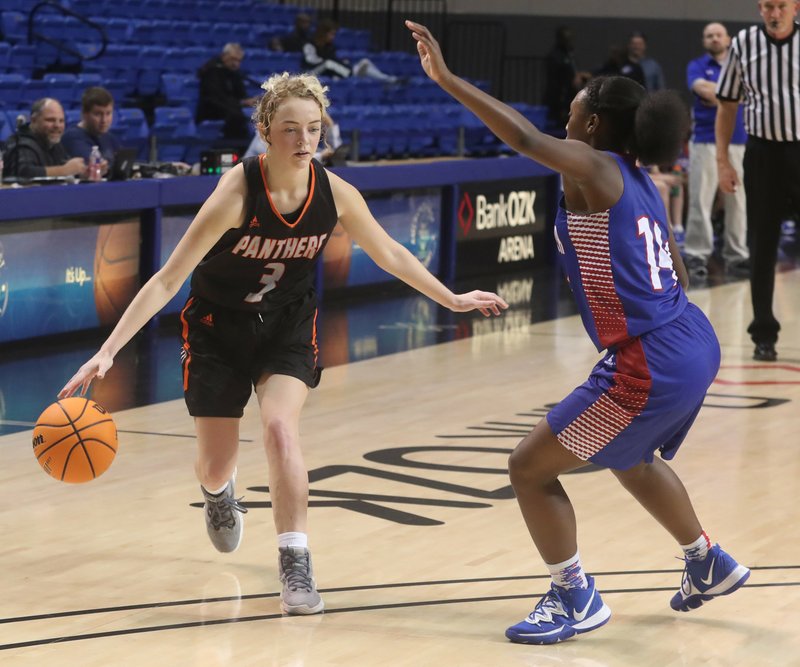 Magnet Cove's Riley Green (3), left, drives for the basket as Arkadelphia's Trinity McKenzie (14) defends during action at the Chatwell's Spa City Shootout Friday. - Photo by Richard Rasmussen of The Sentinel-Record

Whitaker pulled down 6 rebounds while providing a pair of key blocks in the win, and she put up 8 of her 13 points from inside the paint.

"One of the things we focused on today and told them we were doing was we were really wanting to look inside and try to get her involved early and trying to get her going early," said Arkadelphia head coach Jonathan Klein. "We didn't do a great job at that, but she did a good job of just being a good presence inside. That's something we've talked to her about, just being a presence, and I thought she did a good job of stepping up and doing that."

Magnet Cove (3-9) trailed by 5 at the break, but it pulled within 20-17 just 52 seconds into the second half. The spread hovered around 3 points until junior Lady Panther Emma Golden was fed a pass from senior Riley Green to tie the game at 25-all with 4:20 to go in the third quarter.

Green hit a 3-pointer with 2:10 to go to give the Lady Panthers their first lead of the half, but a free throw by junior Kyla Elgas and bucket by classmate Kailyn Rook-Sims knotted the score again at the 1:25 mark as the Lady Badgers closed out the stanza on a 7-0 run.

Rook-Sims hit a shot 11 seconds into the final frame to push Arkadelphia to an 8-point lead as the teams traded baskets until junior Hailey Nix pulled up from outside the arc for a trey off a Whitaker assist at the 3:48 mark for a 41-32 lead. The Lady Panthers pulled within 5 with 3:02 remaining as junior Zoee Rednour sank a bucket to make it 41-36.

Nix provided the final points for the Lady Badgers, going 3 for 4 from the charity stripe, and senior Kaitlyn Fletcher nailed a 3-pointer with 28 seconds remaining to end the Lady Panthers' scoring.

"Execution wise it still isn't there, but our effort and our intensity picked up a lot better today," Klein said. "And that's kind of what we came into the game today wanting to do is just pick that intensity and that aggressiveness up. I thought we did that pretty good."

After over two minutes without a point, Magnet Cove sophomore Karsen Davis broke the opening stalemate with a bucket with 2:18 off the clock. Nix evened the score at the 4:18 mark with a putback of her own shot, kicking off a back-and-forth between the two teams.

"They had just a couple of offensive says that we had scouted that we just didn't guard that we've been practicing against that we knew were coming. We just forgot. I don't know if it's the atmosphere or playing bigger schools, but the past few days, we just haven't showed up at all."

Arkadelphia pushed out to an 18-10 lead before Davis hit a trey with 54 seconds left in the quarter to pull within 3, but Nix nailed a shot with 33 seconds to go for a 20-15 lead at intermission.

Nix led the Lady Badgers with 14 points, 8 rebounds, 2 assists and 2 steals, and Elgas finished with 10 points, 4 rebounds, 3 steals and 2 assists before going down late in the third quarter with a knee injury.

"She missed the whole season last year with a shoulder injury, and we were excited to have her back," Klein explained. "She was excited to be back, and she was really big for us. She provided that spark and was a strong leader, very big for us, and we're definitely gonna be missing her tomorrow."

Rook-Sims pulled down 6 rebounds, all on the defensive end of the court, while dishing out twice and had 1 takeaway.

Green led all scorers with 24 points on the day with 7 rebounds and 1 assist. Jamie Kelley pulled down a game-high 11 rebounds with 1 steal, and Rednour had 7 boards, an assist, a steal and a block.

Arkadelphia will face Mount St. Mary Acadamy today at 10 a.m. in the consolation final. Magnet Cove will travel to Bismarck on Jan. 3 for its next contest.