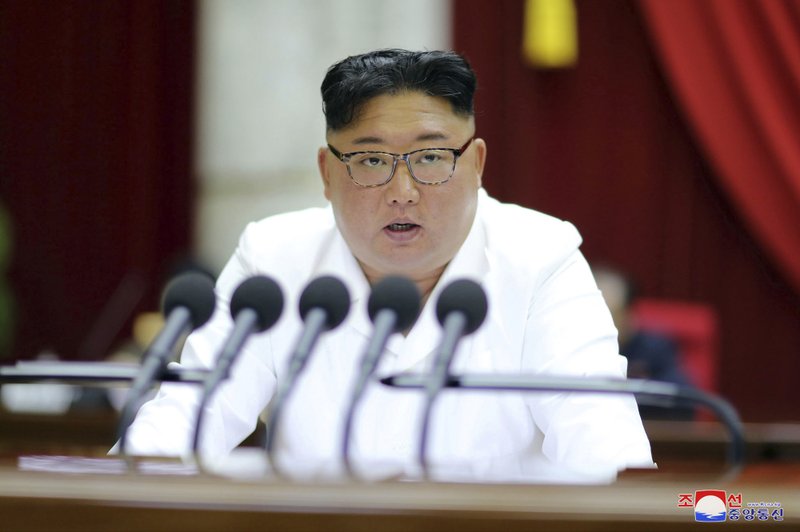 In this Sunday, Dec. 29, 2019, photo provided Monday, Dec. 30, by the North Korean government, North Korean leader Kim Jong Un speaks during a Workers&#x2019; Party meeting in Pyongyang, North Korea. North Korea opened Saturday, on Dec. 28, a high-profile political conference to discuss how to overcome &#x201c;harsh trials and difficulties,&quot; state media reported Sunday, days before a year-end deadline set by Pyongyang for Washington to make concessions in nuclear negotiations. Independent journalists were not given access to cover the event depicted in this image distributed by the North Korean government. The content of this image is as provided and cannot be independently verified. Korean language watermark on image as provided by source reads: &quot;KCNA&quot; which is the abbreviation for Korean Central News Agency. (Korean Central News Agency/Korea News Service via AP)

The plenary meeting of the party's Central Committee, which began Saturday, is being closely watched amid concerns that Kim could suspend his deadlocked nuclear negotiations with the United States and take a more confrontational approach by lifting a self-imposed moratorium on nuclear and long-range missile tests.

The North has said the meeting, which will continue for at least another day, is intended for discussions on overcoming "manifold and harsh trials and difficulties."

Kim, who has said the North would pursue a "new path" if Washington persists with sanctions and pressure, is expected to announce major policy changes during his New Year's address on Wednesday.

The KCNA report did not describe any decisions made at the meeting or mention any specific remarks by Kim about the United States.

The North's official Rodong Sinmun newspaper published photos of Kim, wearing a white dress shirt and horn-rimmed glasses, speaking from a podium as hundreds of government and military officials jotted down his comments.

"Emphasizing the need to take positive and offensive measures for fully ensuring the sovereignty and security of the country as required by the present situation, (Kim) indicated the duties of the fields of foreign affairs, munitions industry and armed forces of the DPRK," KCNA said in its English report, referring to North Korea's formal name, the Democratic People's Republic of Korea.

Kim also "comprehensively and anatomically analyzed the problems arising in the overall state building including the state management and economic construction in the present time," KCNA said.

"He stressed the need to reasonably straighten the country's economic work system and order and establish a strong discipline and presented the tasks for urgently correcting the grave situation of the major industrial sectors of the national economy," the report said.

It added that Kim stressed the need for a "decisive" increase in agricultural production and gave out instructions for improving science, education and public health standards.

Lee Sang-min, a spokesman of South Korea's Unification Ministry, said Seoul is closely watching the North Korean party meeting, but he didn't speculate on what Kim's call for active and offensive security measures would have meant.

Cheong Seong-Chang, a senior analyst at South Korea's private Sejong Institute, said it was the first time under Kim's rule that a plenary meeting of the party's Central Committee continued for more than a day.

Kim has an urgent need to make major policy changes in the face of persistent U.S.-led sanctions and pressure, especially with a global crackdown on North Korean labor exports further straining his broken economy, Cheong said.

It's also likely that Kim during the party meeting reaffirmed a commitment to strengthen his nuclear and missile program, considering the commander of the North Korean army's strategic force was seen during Saturday's meeting, Cheong said.

Secretary of State Mike Pompeo said the Trump administration still believes it "can find a path forward to convince the leadership in North Korea that their best course of action is to create a better opportunity for their people by getting rid of their nuclear weapons."

"We're watching what they're doing here in the closing days of this year, and we hope that they'll make a decision that will lead to a path of peace and not one towards confrontation," Pompeo said in an interview Monday morning with "Fox and Friends."

Kim has met President Donald Trump three times in two years of high-stakes summitry, but the diplomacy has progressed little beyond their vague aspirational goal of a nuclear-free Korean Peninsula. At their last meeting in June, they agreed to resume talks. A working-level meeting in Sweden in October broke down with the North Koreans blaming their American counterparts for maintaining an "old stance and attitude."

The North said earlier this month it conducted two "crucial" tests at its long-range rocket launch facility, raising speculation it has been developing a new long-range missile or preparing a satellite launch.