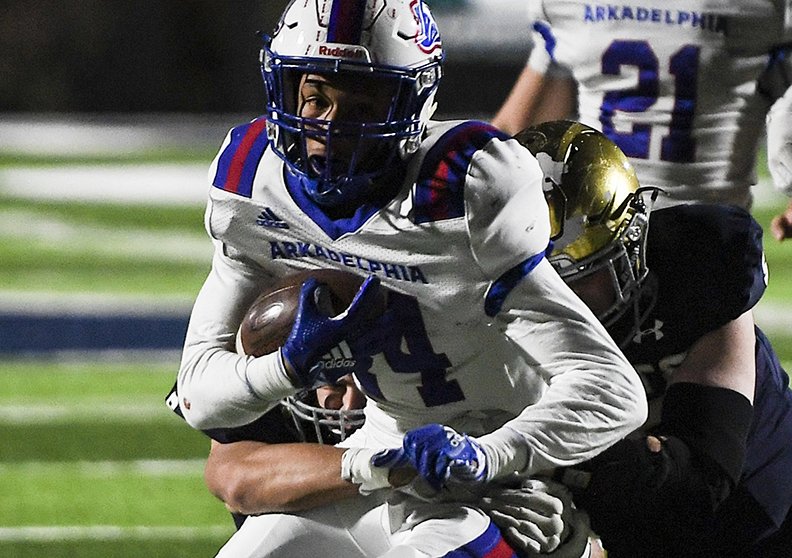 Arkadelphia struggled to an 0-5 start in 2018 as Hatley and several of his teammates battled early-season injuries. The defending state champion competed against competition from larger classifications in the first three non-conference weeks before taking on 4A-7 conference leaders Nashville (10-3, 5-2) and Joe T. Robinson (12-3, 6-1).

The Badgers rolled off 10 straight victories, becoming the first team in Arkansas high school football to start the season 0-5 and win a state championship. They were also the first team to defeat four No. 1 seeds in the playoffs, including three on the road.

Arkadelphia avenged a 42-14 home loss to Robinson on Oct. 5 with a convincing 28-0 victory in the Class 4A state championship game on Dec. 8 at War Memorial Stadium in Little Rock.

Hatley ran for 1,733 yards and 35 touchdowns in his junior season. He signed with Central Arkansas over offers from Arkansas-Pine Bluff, South Dakota State and Southeast Missouri State.

Second-year head coach Nathan Brown and his staff added eight mid-year transfers, which included two NCAA Division I transfers from Arkansas, along with 17 high school players. Jarrod Barnes (5-11, 185), of Cabot, and Tobias Enlow (6-2, 205), of North Little Rock, transferred before the start of the spring semester.

The signing class included another five players from Texas, four from Florida, three from Mississippi, two from Tennessee and one each from Alabama and Missouri. Five receivers made it the largest group by position.

Marshun Douglas (5-9, 175) was the team's only other running back signee out of Kirby High School in Memphis, Tenn. He ran for 5,178 yards and 72 touchdowns in his high school career, signing with Central Arkansas over offers from Southeast Missouri State, Tennessee State, Tulsa and UT-Martin.

The Bears were 6-5 last season and 5-4 in the Southland Conference, but they have averaged 8.6 victories in the past three years with consecutive appearances in the Football Championship Subdivision playoffs.

Central Arkansas will open the 2019 season on Aug. 31 at Western Kentucky. The team's first home game is scheduled for Sept. 14 against conference opponent Abilene Christian.