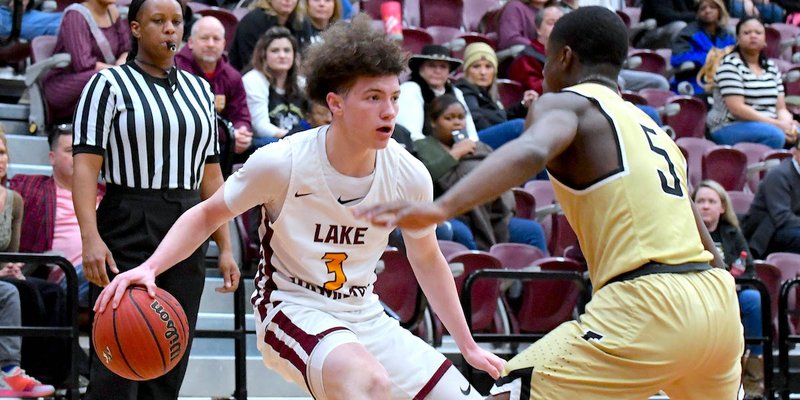 The Sentinel-Record/Grace Brown ONE ON ONE: Lake Hamilton senior Lane Kersey (3) dribbles against Hot Springs sophomore J.J. Walker (5) Friday during the Wolves' 83-65 victory at Wolf Arena.

Lake Hamilton senior Kanaan Williams and Hot Springs junior Santiair Thomas traded inside baskets in the first minute of the fourth quarter. Kersey then hit a 3-pointer to start a 17-3 run over the next three-plus minutes to put the Trojans (21-4, 9-2) away.

"We broke down," said Hot Springs head boys' basketball coach Antoni Lasker. "We were mentally weak. We were selfish. There was no 'team' in that fourth quarter. There was no team throughout most of the game.

"I'm disappointed in the way we showed and the effort we showed. The fans showed up, and we let them down. But for the most part, we are extremely mentally weak. We have to improve that; we have to get better as a team, and we have to continue to remain a team. When we deviate from the team game, that's when we get in trouble, and that is why we got beat by almost 20 tonight."

As many as 1,200 fans were estimated to have packed into Trojan Fieldhouse when the Wolves won the first matchup, 39-36, on Jan. 15. Both teams showed more willingness to run in transition Friday in front of a mostly full Wolf Arena with seating for almost 2,300.

"I think that is what everybody wanted to see, too," said Lake Hamilton head boys' basketball coach Scotty Pennington. "As a coach, you don't do what people want to see. You do what you think is going to give you the best chance to win, but we were fine with that.

Lake Hamilton continued to pour on the pressure into the late stages. Hot Springs senior Ramello Cason was called for an intentional foul on Kersey with 24 seconds remaining in the game, and Lasker was hit with a technical for arguing the call at the scorer's table.

Pennington said Friday was Kersey's best showing of the year after scoring almost 30 points several times this season. Kersey had 16 of Lake Hamilton's first 18 points in the opening quarter.

"Tonight, he proved he can do all of it," Pennington said. "He can score at the rim, in the mid-range, he can go for the three and whatever he needs to do. He's got it rolling right now."

Kersey hit the game's only four 3-pointers as both teams sought to crowd the lane. Pennington said the Wolves wanted to prevent penetration and make it difficult for Thomas to get going inside.

"Santi hurts people in the high post, so we tried to smother him up," Pennington said. "We played more zone tonight than we have before because I felt like we had a hard time staying in front of them. We tried to use two defenders to stay in front and not worry about kick-out threes."

"They did a much better job of crowding the lane than did," Lasker said. "We gave up too many straight line drive layups to the basket. They kept us out of the lane.

"They played defense without fouling and were able to get the ball and push it back down our throats. They beat us at our own game."

Both teams faced foul issues despite the amount of contact that was allowed on play inside. Kersey was 6-for-6 at the line in the first quarter as Lake Hamilton went 17-for-21, 81 percent, in the first half on 14 Trojan fouls.

The foul count was 11 for Hot Springs to only four for Lake Hamilton midway through the second quarter. The Trojans hit 8 of 10 attempts in the first half.

Lake Hamilton senior Mondo Watkins went to the bench with 1:33 left in the third quarter with his fourth foul. Williams fouled out with 4:57 left in the game.

"The way the game was officiated, it was going to be difficult for anybody to score at the basket," Pennington said. "They let us play. It was physical on both ends. No blood, no foul.

"That helped us at times. It helped them as well. I'm glad it was that way because you are letting the kids decide the outcome instead of calling every ticky-tack foul, and everybody's best players are out of the game because they are in foul trouble."

The game followed a similar course as the first matchup when Hot Springs led, 8-0, in the opening two minutes before being outscored, 39-28, the rest of the way. The Trojans had a 6-0 lead on Friday before a 3-pointer by Kersey sparked the Wolves to a 22-16 lead in the first quarter.

Lake Hamilton led, 34-28, at halftime, but Hot Springs twice took the lead in the third quarter. Lasker spoke to his team for longer than usual in the locker room after the game.

"Those guys from Lake Hamilton played team basketball tonight. They didn't care who scored, and that's why we got handed the L."

Sophomore point guard J.J. Walker fouled out in the final minute as Hot Springs' leading scorer with 21 points, including 9 of 10 shooting at the free throw line. Campbell scored 15 points, Miles had 12 and Thomas added 10.

Only three games remain in the regular season for both teams. Hot Springs will next meet Benton (13-9, 6-5) on Tuesday in hopes of solidifying its hold on the conference's No. 2 seed at the state tournament, which will be held at Wolf Arena at the end of the month.

"So when the state tournament gets here, everybody is seeing the best we got. I thought, tonight, we made a step in that direction."