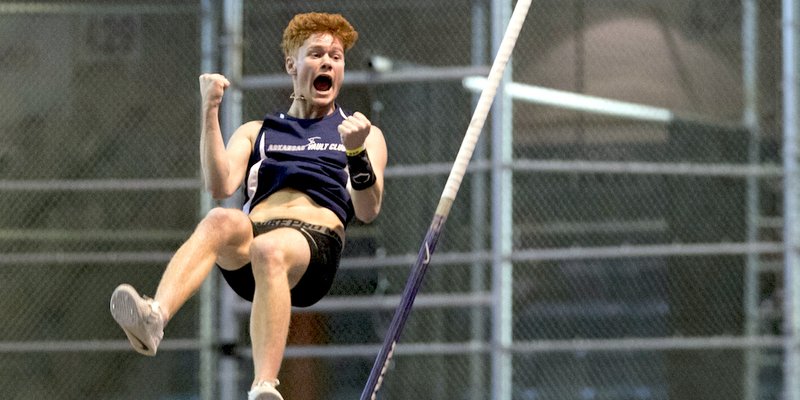 NEW YORK CITY -- Lake Hamilton seniors Haze Farmer and Edie Murray each took first place in their pole vault competitions Saturday in one of the nation's most prestigious track competitions.

The Wolves competed against an international field of top athletes at the 112th New York Road Runners Millrose Games in the New Balance Track and Field Center at the Fort Washington Avenue Armory in Washington Heights, a neighborhood in the northern portion of the New York City borough of Manhattan.

The Armory is home to the National Track and Field Hall of Fame. The Millrose Games were held at Madison Square Garden from 1914-2011 and are featured as part of the USA Track and Field Championship Series.

Farmer took first place in the junior boys' elite pole vault event, which was sponsored by the Hudson Valley Flying Circus Club. He signed in November to compete in college at Georgia.

Bradley Jelmert, of Warren, N.J., placed third and Luke Knipe, of State College, Pa., placed fourth. Both were listed with a final height of 15-5 feet.

Murray won the junior girls' elite pole vault, also sponsored by the Flying Circus, with a height of 13-5.5. She signed in December to join the track program at Arkansas in Fayetteville. Lake Hamilton alum Josie Carson is currently a freshman for the Razorbacks.

It was the first time in the annual event's history two athletes from the same school won the pole vault events. They were coached by Lake Hamilton's Morry Sanders.

Farmer became the Lake Hamilton track and field program's eighth All-American in June with a second-place jump of 17-1 at the New Balance Outdoor National Track and Field Meet in Greensboro, N.C. Nelson took seventh place in the men's event, while Murray placed 11th in the women's.

Both Farmer and Murray were individual state champions in the previous Class 6A, leading the Wolves to team titles at Russellville in May. They also won each of their pole vault competition the following weekend at the Arkansas Activities Association's Meet of Champions at Wolf Stadium in Pearcy.

Lake Hamilton's 2019 spring track and field season will begin with the Lake Hamilton Relays on Feb. 28. The district won a bid last month to host a joint state meet on May 3 for the new 5A and 6A classifications. The Meet of Champs will return to Wolf Stadium on May 11.