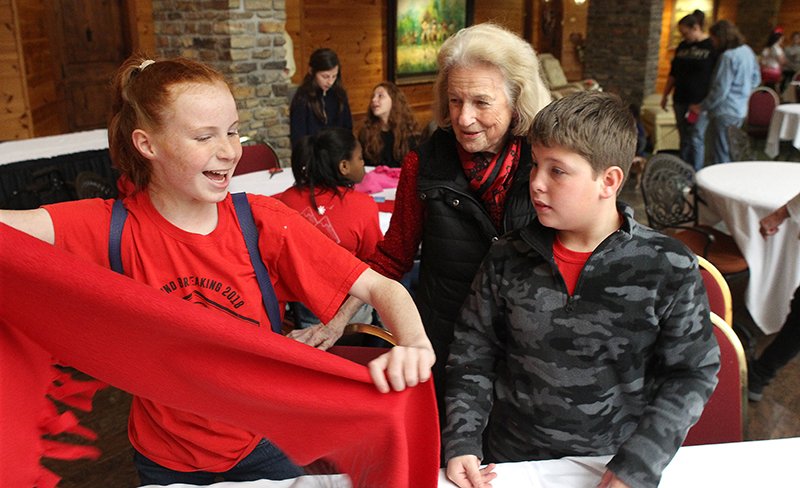 Rather than have a Valentine's Day party, the fifth- and sixth-grade students at Cutter Morning Star Middle School showed their love for residents of The Atrium at Serenity Pointe and The Caring Place as part of Share the Love Day.

Sarah Richardson, CMS fifth- and sixth-grade English teacher, spearheaded the two-month-long project's planning effort at the school, while Kathy Packard, director of education for the Oaklawn Center on Aging, and Courtney Post arranged the off-campus logistics of the field trip. It was the first Share the Love Day Cutter Morning Star has participated in.

Richardson said she saw a need to shake up the usual rigmarole of having run-of-the-mill Valentine's Day parties.

"I noticed that the older kids get bored with parties. And I wanted to find something that would be fun for them, but still celebrate the day. So that's what we decided on," she said.

The other fifth- and sixth-grade teachers wanted to do a volunteer activity also, she said. With the warm, caring aspect of interacting with those who might be lonely on the holiday, visiting The Atrium and The Caring Place was the perfect match.

Richardson said she feels Share the Love Day will present students with an opportunity to diversify themselves.

"We spend a lot of time focusing on academics, but we also focus on what we call 'habits of success': developing the whole child. I think this fits in with our philosophy of making sure that students know that academics are important, but giving back to their community, making a positive difference, and respecting other people in public are just as important," she said.

Prior to the field trip, it was necessary to inform the children on what sort of behavior they might encounter from those with Alzheimer's, dementia, or other cognitive disabilities. Packard visited each homeroom classroom to educate students.

"We educated them on what it's like to grow old, what happens to us, especially mentally and sometimes physically, as we grow older, and that even though we are older, we still have a lot left to give back to our community. So they got kind of a science project on what happens to people, especially those diagnosed with Alzheimer's disease and what happens to the brain. We let them know how you visit with people who might have that diagnosis, and how you can still interact with them," said Packard.

Fifth-grader Sierra Rowton told The Sentinel-Record she was very eager for the field trip.

"I think it's pretty cool because a bunch of people in the past haven't done it. I think it's good for us to play chess with older people, because maybe then they could remember back whenever they were a kid and they played chess. I play with a bunch of my friends, and they think it's pretty cool that we get to go play with older people because we always go against people our own age, and we never really have any older competitors," Rowton said.

Sixth-grader Landon Cudbat said he likes the fact that going to The Atrium and The Caring Place is different from the usual school Valentine's Day celebrations.

"I'm excited to see some elderly people and see what it's like. We have parties over and over again, so this is something new," he said.

Thursday morning, the entire fifth- and sixth-grade student body of around 100 students was bused to The Atrium, where they visited with residents and made no-sew scarves together with fleece material provided by the retirement community.

Share the Love Day was a hit among young and old alike.

"Oh yes, so much fun. I enjoy these kids, they are a lot of fun. It's nice getting to help them, but you know, they are pretty good at it," said The Atrium resident Polly Barnett as she helped students make scarves.

Another resident at The Atrium, Grace, who asked to only be identified by her first name, echoed this sentiment, saying "I'm enjoying the kids, it's wonderful."

The beneficial effects of this activity to the residents was immediately noticeable to The Atrium staff.

"Honestly, intergenerational activities are one of the best things in the world. It brings them back, and they remember so many things. Them just seeing the kids is fabulous. It helps, it's fun, and it reminds them of their own children or their own grandkids. Their eyes light up even just watching the kids. They don't get to see kids enough. So this is wonderful," said Memory Support Director Stephanie Howell.

"For these kids, it's almost innate. They are over here carrying on conversations, it doesn't matter to them. They are engaging with all of the older adults here," said Packard.

After their time at the Atrium, the students were bused to The Caring Place to have lunch with the participants there, play games, distribute the scarves, and continue Share the Love Day.