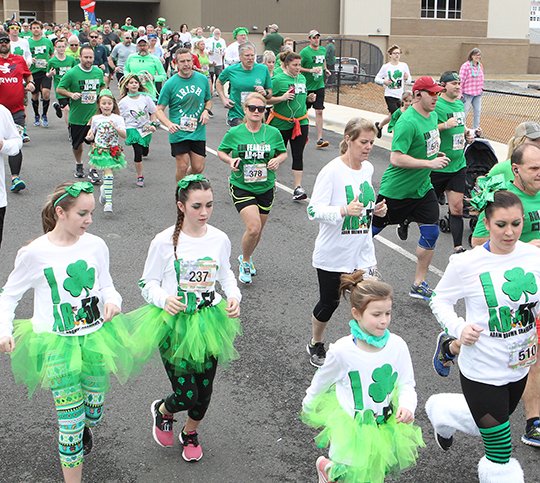 Participants take off from the start of the Adam Brown Shamrock Run 5K at Lake Hamilton School Saturday, March 10, 2018. In its 8th year, the event drew over 1000 participants. The proceeds raised will go to the Adam Brown Lagacy Fund which assists local individuals and charitable organizations. (The Sentinel-Record/Richard Rasmussen)

Registration for the Ninth Annual Adam Brown Shamrock Run/Walk 5K is now underway and organizers are working on a special addition to the event.

"We've been working closely with the United States Navy to bring this special addition to this year's event which will soon be announced," said Rachel Mundy, event organizer. The annual event is held in memory of U.S. Navy SEAL Chief Petty Officer Adam Brown, who died while on active duty in Afghanistan on March 17, 2010.

According to Mundy, the event annually attracts thousands of participants to Hot Springs. The race kicks off at 9 a.m. at Lake Hamilton School District's Wolf Stadium; however, she said the organizers ask participants to arrive no later than 8:30 a.m.

"We have people come to Hot Springs from all over the country and even the world," Mundy said, adding that participants will also register as virtual runners and complete their own 5K wherever they are if unable to make the trip to Hot Springs.

Brown's life and testimony were shared in Eric Blehm's book, "Fearless: The Undaunted Courage and Ultimate Sacrifice of Navy SEAL Team SIX Operator Adam Brown," and Mundy said his story has clearly made an impact on individuals around the globe.

The 5K was once a very somber event, but she said over the years it has become a fun celebration of Brown's life.

"The fun totally embodies Adam," Mundy said. "He was one of my best high school friends. He was funny, lighthearted, and ultimately Adam showed he would do absolutely anything for his friends."

A professionally chip-timed race, the entry fee is $25 for adults and $15 for children. For those unable to attend or participate, there are options to purchase a T-shirt for $30 or just make a $25 donation.

"There will be a packet pick up the day before at Lake Hamilton Arena for those who have preregistered," Mundy said, and early pick up is available from 5-7 p.m. March 8.

"The registration price goes up a week before the event and ends a couple days before," she said.

Lunch is provided by Smokin' in Style BBQ.

Mundy said a committee of Brown's family and friends select organizations and individuals that they feel would benefit most from the proceeds. Organizers will present donations to these organizations the day of the race.

"I think it is very important for people to actually see us give the money," Mundy said. "Many organizations say that they donate funds to this or that group but I like for people to see us actually put that into motion in front of them.

"Without those people there for the event it would not happen so it's a way to honor and thank them, too."

Online registration is available at https://app.regwiz.io/register/shamrockrun/534.

For more information on the event, email Mundy at [email protected]