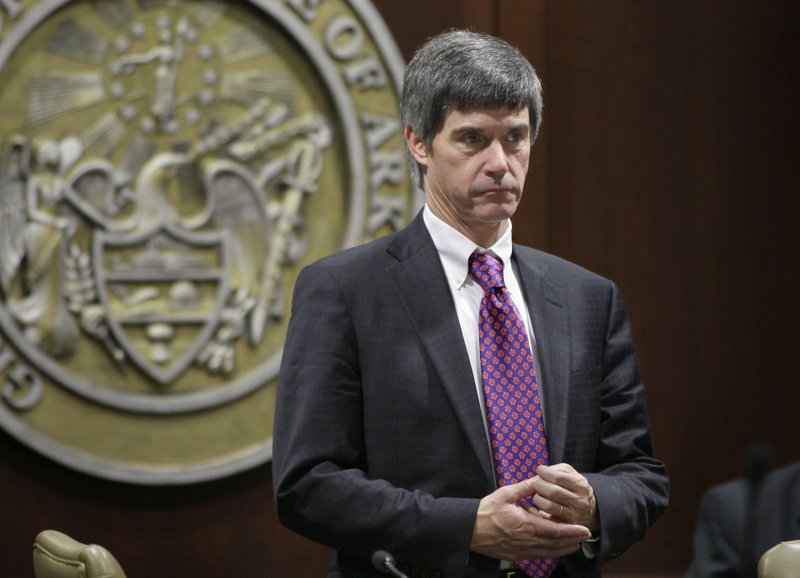 FILE - In this Feb. 22, 2012, file photo, state Sen. Gilbert Baker, R-Conway, is seen at the Arkansas state Capitol in Little Rock. Arkansas has had its share of notable corruption scandals over the years, but a flurry of recent cases has been eye-popping for even the most jaded veterans of the state&#x2019;s politics. A federal grand jury in January indicted, Baker, a former state GOP chairman who served in the state Senate of conspiring to bribe an ex-judge who admitted to lowering a jury&#x2019;s award in a negligence case in exchange for campaign contributions. (AP Photo/Danny Johnston, File)

LITTLE ROCK -- Arkansas has had its share of notable corruption cases over the years, including when the governor who succeeded Bill Clinton was convicted in a Whitewater-related probe and when a state treasurer was caught accepting bribes stashed in pie boxes.

A flurry of cases in the past two years has been eye-popping, though, even for the most jaded veterans of Arkansas politics. Among those who have been charged are a nephew of the current governor, a champion of campaign finance reform and a top county official who admitted to taking bribes funneled through the church where he was a pastor.

The recent cases have stirred fears that the Capitol is becoming better known as a hotbed of corruption than for any policy achievements, and legislative leaders are scrambling to repair that image and find ways of deterring future misdeeds.

"Let us begin the session of the General Assembly today with a determination that the culture of greed and corruption is over," Senate President Jim Hendren told colleagues on the first day of the current legislative session. "We will not participate in it, we will not ignore it and we will not tolerate those who do."

Since January 2017, seven current or former state lawmakers -- none of whom are still in the Legislature -- have been ensnared in corruption investigations -- most in a probe that looked at state money that was going to nonprofits, including a mental health provider and a for-profit Christian college in northwestern Arkansas.

At the center of that investigation was Rusty Cranford, a prolific lobbyist who admitted last year to taking part in a multimillion-dollar bribery and embezzlement scheme that involved lawmakers.

One of the people he said he bribed was former Republican state Sen. Jon Woods, who co-sponsored a successful 2014 constitutional amendment that banned lawmakers from accepting lobbyist gifts and prohibited corporations from contributing to political candidates in the state. Woods was convicted in the bribery case and is serving an 18-year prison sentence. He is appealing his conviction.

Cranford also said he bribed the governor's nephew, former Republican state Sen. Jeremy Hutchinson, who denies the allegations and hasn't been charged with taking bribes. However, Jeremy Hutchinson resigned last year after he was charged with misspending campaign funds on things including gym memberships and a Netflix subscription. He has pleaded not guilty and is trying to get the charges dismissed.

Hank Wilkins, a Democrat who served in the state House and state Senate before becoming the top elected official in Jefferson County, pleaded guilty last year to accepting bribes from Cranford when he was in the Legislature. The money was funneled to Wilkins through a church where he was a pastor.

The probes extend beyond the Capitol, too. A federal grand jury in January indicted a former state GOP chairman who served in the state Senate of conspiring to bribe an ex-judge who admitted to lowering a jury's award in a negligence case in exchange for campaign contributions. State Sen. Gilbert Baker, who was no longer in the Senate and serving as a lobbyist when the alleged bribery scheme occurred, has pleaded not guilty and is awaiting trial.

All of those investigations were conducted at the federal level, leaving Arkansas leaders pushing for better safeguards at the state level, even if they acknowledge that such reforms wouldn't necessarily have prevented the recent crimes alleged to have occurred.

"Those are not gray areas. Those are black and white areas," Republican Gov. Asa Hutchinson said last month. "You don't need new laws to prohibit it because it was a clear violation of the law. ... Those are matters of integrity and it's not a matter of legislation."

The scandals prompted the state Senate to overhaul its ethics rules last year, including expanding financial disclosure requirements for state senators. The Senate also created a committee to handle complaints against its members, but the complaints can only be filed by fellow senators. The recent cases also led Arkansas Attorney General Leslie Rutledge to create a public integrity unit that she said would investigate corruption cases.

"(The public) can't help but think it's a jaded process," said Democratic Sen. Keith Ingram, who is the chamber's minority leader.

Legislative leaders in February unveiled a package of ethics bills aimed at cleaning up the Capitol's image, including increasing the maximum fines the state's Ethics Commission can levy and making personal use of campaign funds a felony rather than a misdemeanor. They're also backing a proposal to make elected officials convicted of certain crimes ineligible to receive their retirement benefits.

"We can pass all the ethics legislation in the world, but someone who is intent on gaming the system (is) going to find a way around it," Ingram said. "But we can put some teeth in some things, point out some practices that are taking place."