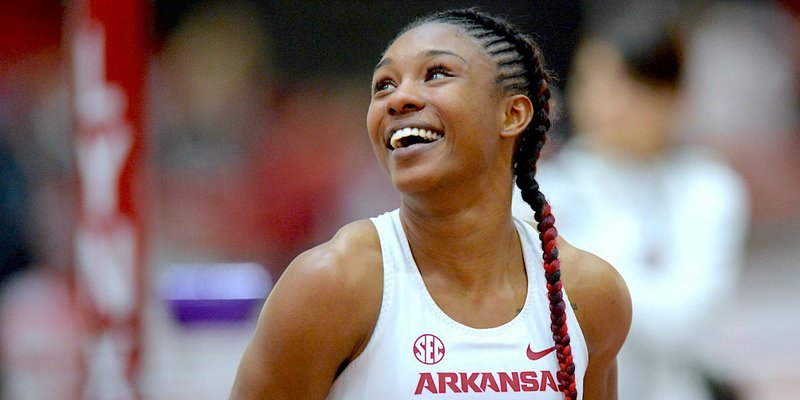 NWA Democrat-Gazette/Andy Shupe CLINICAL: Arkansas senior Kiara Parker reacts to seeing her winning time in the finals of the 60-meter race Saturday during the Razorback Invitational at the Randal Tyson Track Center in Fayetteville.

Oregon was a distant second with 101 points. Kentucky took third place with 86 points.

"It was across the board," said head coach Lance Harter. "Obviously, our sprints, Chris Johnson put on a clinic today. The 60-meters, the 60-meter hurdles, the 200-meters last night was fantastic.

"The vault always takes care of business, we had three vaulters compete absolutely fantastic last night, but then our fourth vaulter last night was a big breakthrough. Then we come back with the pentathlon and welcome back Kelsey (Herman) after being off for a year to take care of some leg issues and she opens up with a national qualifying mark."

Kiara Parker and Jada Baylark advanced to the final of the 60-meters with times of 7.18 and 7.33, respectively. Parker not only broke the school record time of 7.20 set by Veronica Campbell in 2004, but she also recorded the fourth-fastest time in the world this season.

The final saw the senior from Waldorf, Md., shave even more time off with a winning time of 7.15 that not only was a meet record, program record and personal-best, but is currently tied for the world lead in the event with USC's Twanisha Terry who recorded her time this weekend in Lubbock, Texas, at the Texas Tech Classic.

Defending NCAA champion Payton Chadwick recorded times of 8.02 and 8.01 in the preliminaries and the finals of the 60-meter hurdles. Teammate Janeek Brown, a 2018 NCAA All-American in the event, finished second in the finals, running 8.02.

Herman, a two-time All-American pentathlete, capped her opening event of the season by scoring more than 4,100 points on Friday.

Chadwick turned in the second-fastest 200-meter sprint in program history, breaking her tie with former Razorback Taylor Ellis-Watson (22.99). Chadwick finished second in her heat, trailing Kentucky's Abby Steiner, who turned in an identical 22.97. The final result came down to a difference of four one-thousandths of a second as Steiner took the event in 22.965 over Chadwick's 22.969.

Arkansas will split the squad three ways this week as the Razorbacks travel to the New Mexico Classic, the Charlie Thomas Invitational and the New York Armory.

The No. 12 men's team took third place in its competition with 74 points.

Oregon won the meet with 116 points. The Ducks narrowly took first place ahead of the Florida Gators, who scored 115 points.

"We definitely had some bright spots," said men's head coach Chris Bucknam. "We're not usually in this position. We're usually battling for that team title. What you saw this weekend is what we have and we're going to have to work hard to keep improving as a total team."

Gabe Moore and Derek Jacobus finished the men's heptathlon in first and third, respectively. Moore had a two-day total of 5,865 points, nine points shy of his personal best, and currently leads the NCAA in the event.

Erich Sullins turned in his second straight win of the season in the weight throw on Friday. He rewrote his school record mark at the season opener and captured the event title for the second time in a row with a best of 65-10.25 feet.

The men's distance medley relay of Ethan Moehn, Nick Hilson, Chase Pareti, and Matt Young combined to run 9:46.50 Friday night for second place. The time would have led the nation before the weekend.

Arkansas will return to the track this weekend for the New Mexico Classic at the Albuquerque Convention Center.