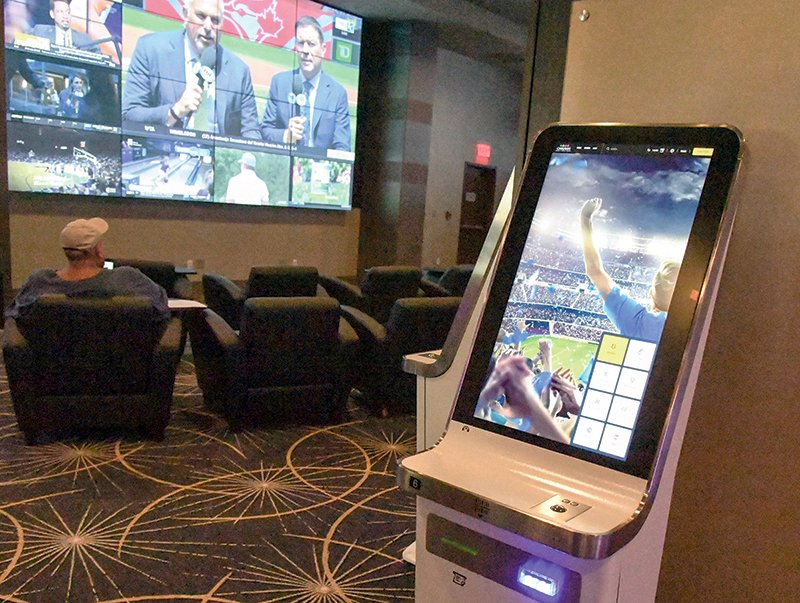 The Sentinel-Record/Grace Brown PLACING BETS: One of the wagering kiosks at Oaklawn Racing Casino Resort's new Race &amp; Sports Book, which opened Monday. The addition makes Arkansas the ninth state in the country to offer sports wagering, according to the American Gaming Association.

Oaklawn Racing Casino Resort began offering sports wagering Monday with the opening of its newly remodeled Race & Sports Book at the north end of the casino.

Arkansas is the ninth state in the country to offer legal, single-game sports betting, according to the American Gaming Association.

Caroline Ponseti, director of media relations for AGA, said in a news release Arkansas was among the first states to authorize sports wagering after the U.S. Supreme Court struck down the failed federal sports betting ban in May 2018.

With the state also recently launching commercial casino gaming, Ponseti said Arkansas' "historic gaming expansion" comes at a time when support for gaming is at an all-time high.

"Nearly 100 million adult Americans have placed a sports bet in the past 12 months or would do so in the future, and 88 percent of adults view gambling as an acceptable form of entertainment," she said.

Oaklawn said in a news release on Monday that Race & Sports Book, which offers teller wagering as well as "fast, user-friendly kiosks," will be open seven days a week.

Sports wagering allows fans to place bets on their favorite teams in a variety of sports from NFL to NCAA, to international sports like cricket and rugby. Features include in-game wagering, numerous proposition bets, parlays and future wagering all season long, it said.

"We're excited to be the first to provide sports wagering in Arkansas," Oaklawn General Manager Wayne Smith told The Sentinel-Record Monday afternoon. Earlier in the day, Smith placed the first sports wager in Arkansas, betting $5 that the Dallas Cowboys would beat the New York Giants in the season opener on Sept. 8.

"All the credit goes to our racing commission for getting us all the rules and regulations," Smith said.

The Race & Sports Book provides a comfortable atmosphere for guests to wager and watch sporting events, providing another amenity in the region to draw patrons from surrounding states, Smith said.

"Not everyone who comes to the casino is going to want to play the slot machines or table games, but they might enjoy betting on a sporting event," he said, noting July will serve as a soft open, allowing staff to get acclimated to how sports wagering will work prior to the 2019 football season.

Smith said Oaklawn partnered with SBTech, which advised the casino on best practices and how to open up the sportsbook.

Tellers are available 10 a.m. to 10 p.m., while kiosks are available from open to close of the casino. Six kiosks are located inside the Race & Sports Book and four are located just outside of Silks Bar and Grill, which has added televisions for sports viewing. One kiosk is in the High Limits area and one is located near the entrance at the top of the escalator.

Smith said he believes Oaklawn is doing this "the right way" by offering both live tellers and kiosks.

"The key with ours that's different from other states is that we provide a tremendous amount of in-game betting," he said. "What that means is you can wager on different aspects of the game and you can also make proposition bets such as how many strikes you think a player is going to have, or how many goals a player will make in a game.

"It's a pretty robust kiosk system and I think it's second to none in the nation."