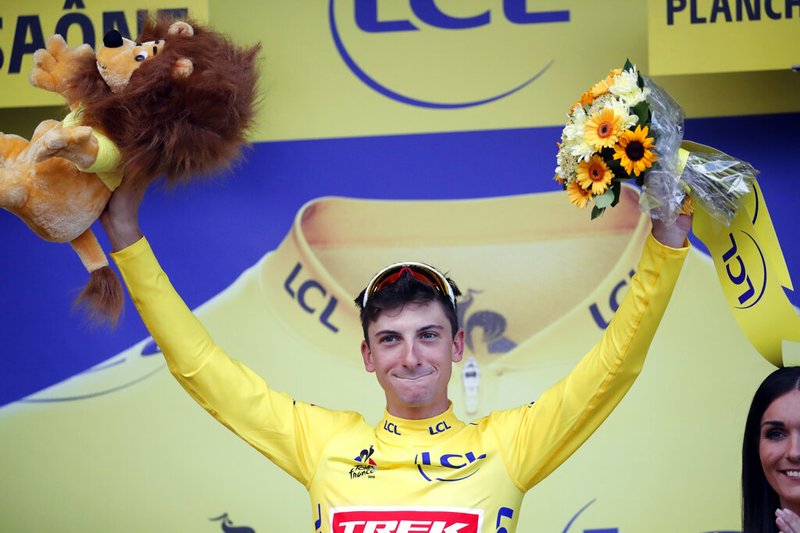 Italy's Giulio Ciccone celebrates with the overall leader's yellow jersey on the podium, at the end of the sixth stage of the Tour de France cycling race over 160 kilometers (100 miles) with start in Mulhouse and finish in La Planche des Belles Filles, France, Thursday, July 11, 2019. (AP Photo/Christophe Ena)

CHAMPAGNEY, France — Giulio Ciccone's biggest dream is to wear the Giro d'Italia's pink jersey once in his life.

He will be covered in a more prestigious color Friday at the Tour de France -- yellow -- after a grueling effort over four brutal climbs earned him the most coveted tunic in cycling.

A Tour rookie, Ciccone was beaten for the stage victory by Dylan Teuns at the summit of the leg-breaking climb of the Planche des Belles Filles, yet managed to take the race lead from Frenchman Julian Alaphilippe on Thursday.

Quite an achievement for a rider who had not planned to ride the Tour this year.

"My big goal this year was the Giro," said Ciccone, who won a tough mountain stage this spring at his home race in addition to the best climber's jersey. "The Tour was not on my program. But because of my strong condition, the team sent me to the Tour in support of Richie Porte and to get some experience."

Under the colors of the small Bardiani, he won a stage at the 2016 Giro and has since enjoyed a steady progression. Now with Porte's Trek-Segafredo squad, the up-and-coming rider from Bergamo in northern Italy was one of the main attractions of the Italian three-week race in May with his superb victory at the Passo del Mortirolo.

Ciccone, who cites former Tour champions Alberto Contador and Vincenzo Nibali among his models, picked up bike racing as an 8-year-old after spending hours watching the Tour and the Giro on TV.

"And now I'm here answering questions with this yellow jersey, it feels strange," he said with an incredulous smile.

Given the flat profile of Friday's 230-kilometer stage, Ciccone has good chances to stay in the lead until the weekend. Despite his ambition to challenge for the overall win at a Grand Tour in the near future, he's well aware of his current limitations.

"For sure the yellow jersey does not change our plans. Richie is our leader," he said. "We also have another card to play with Bauke Mollema. I'm going to honor this jersey and try to keep it, then I'll get back to my teammate work for Richie Porte."