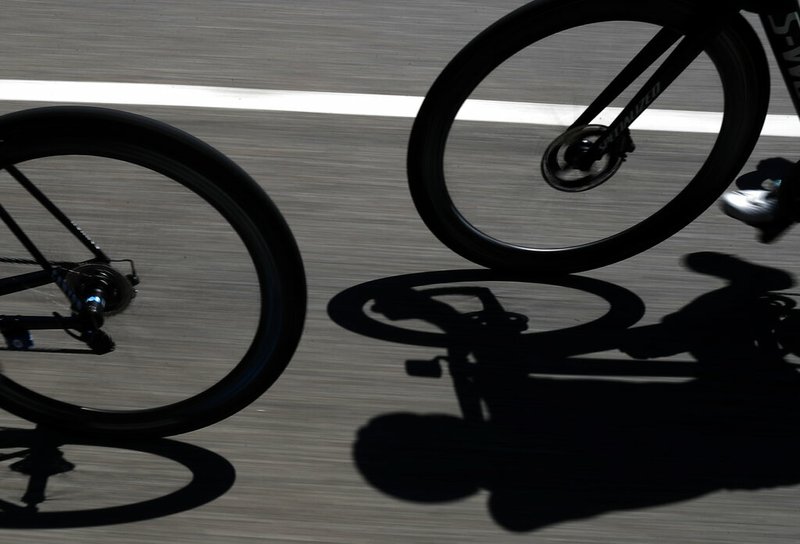 Riders cast their shadows during the fifth stage of the Tour de France cycling race over 175.5 kilometers (109 miles) with start in Saint-Die-Des-Vosges and finish in Colmar, Wednesday, July 10, 2019. (AP Photo/Thibault Camus)

COLMAR, France — Patrick Bevin of New Zealand has withdrawn from the Tour de France ahead of the sixth stage after breaking two ribs in a crash.

Bevin is the first competitor to be forced out of this Tour.

He crashed during Stage 4 on Tuesday and continued racing but his CCC team said pain increased during Wednesday's stage to Colmar in eastern France.

He underwent X-rays at the finish line which revealed two fractures on the left side of his thorax.

"As it's often the case with rib fractures, the pain increases in the second and third day following the crash and, although Patrick wanted to try and race on stage six, this morning we collectively made the decision that he should stop racing in order to recover well and focus on his goals in the second part of the season," CCC team doctor Max Testa said.

Bevin was 137th in the overall standings on Thursday, going into the stage to the Planche des Belles Filles, the first mountain test on the three-week race program. He trailed race leader Julian Alaphilippe by more than 31 minutes.

"I fell on my left side and caught a wheel to the chest. I thought I had got away with it at the time and I didn't have any trouble when I got back into the race, no skin off or anything like that," Bevin said in a statement released by his team. "But as the stage wore on, it got worse. We did everything we could to minimize the pain."