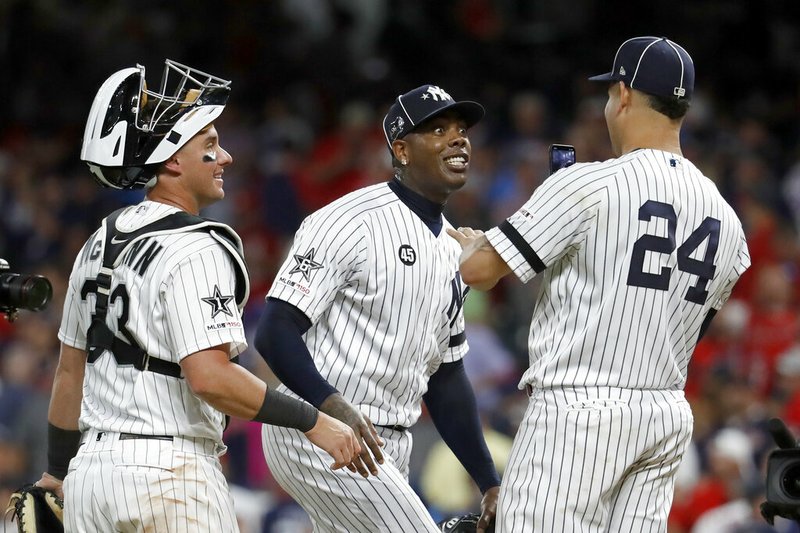 First the players, now the ball. Home runs are skyrocketing, and once again Major League Baseball officials claim they don't know the reason why.

Then again, it might be that they're just not looking hard enough.

Unlike the players, the ball still looks the same. Commissioner Rob Manfred said it tests much the same as before, too, though he conceded there might be less drag on the ball than there was in the past.

So why are batters teeing off at a rate nearing three home runs a game, a 19 percent increase from a year before? Why are hitters on a pace to hit 1,000 more home runs than the Steroids Era high mark of 5,693 in 2000?

Good question, Manfred says, but it's not because anyone juiced the ball.

"Manipulation of the baseball is a great conspiracy theory," Manfred said Tuesday at the All-Star Game in Cleveland. "How you manipulate a human-dominated handmade manufacturing process in any consistent way, it's a smarter human being than I."

Don't tell that to pitchers like Justin Verlander, who say they can tell something is different just by how the ball feels in their hands. He and a few other outspoken pitchers believe the ball has been changed, no matter how much MLB protests otherwise.

And in a game defined by numbers, the home run numbers certainly suggest the same thing.

If you enjoyed the Home Run Derby the other night, you'll enjoy this MLB season. Every night is Home Run Derby, it seems, as balls fly out of stadiums like they were propelled by rocket fuel.

And the suspicion, after years of being on the players, has now fallen on the ball.

It's an easy target, even if other factors are also contributing to the surge in long balls. Put together they're giving baseball a problem in the way the game itself is played.

Batters no longer fear strike outs or low averages. They're concerned with uppercut swings and launch angles, and don't worry about protecting the plate with two strikes.

Pitchers, meanwhile, throw harder than ever, and are rewarded with more strikeouts than ever. The flip side is the balls that batters do make contact with tend to fly further than they have before.

Almost everyone tries to hit it deep, no matter the situation. There are no hit-and-runs, no hitting behind the runner, and the bunt is on the disappearing list.

And, let's face it, there are still juiced players in Major League Baseball. If anyone doubts that steroids are still not an issue in baseball, look no further than the starting shortstop for the American League All-Star team, Jorge Polanco, who sat out half of last season after being caught taking the steroid Stanozolol.

So it's not just the ball, which Manfred says has been studied extensively by experts who find no difference other than a decrease in the amount of drag in flight. A lot has to do with the way the game is being played in the analytics era, and the players themselves who seem to get stronger every year.

Still changing the ball might be the easiest way to change the perception, at least, that home runs are killing baseball.

"We just haven't made a decision on that," Manfred said. "Changing the baseball is a mechanism by which you could manage the way the game is being played. We haven't missed that idea. But if we were going to do it, we would do it in a way that was transparent to the media and the fans in advance."

Manfred has a difficult balancing act in a sport that over the years has proven resistant to change. And we're just getting to the point where it's obvious to any casual fan that the game is different in its current form -- and not in a good way.

Baseball resumes in earnest Friday with a lot of issues. Attendance is down for the second straight year, dropping nearly 500 fans a game after being down 4 percent the year before, while the All-Star Game drew its lowest rating ever on TV.

Meanwhile, only one division has a heated race, games seem to take forever, and the cost of taking a family of four to the ballpark is prohibitive.

Yes, the ball is part of the problem. So many more of them are going over fences than before that it has to be.

But fixing the ball won't fix everything that ails the game.

Tim Dahlberg is a national sports columnist for The Associated Press. Write to him at tdahlbergap.org or http://twitter.com/timdahlberg