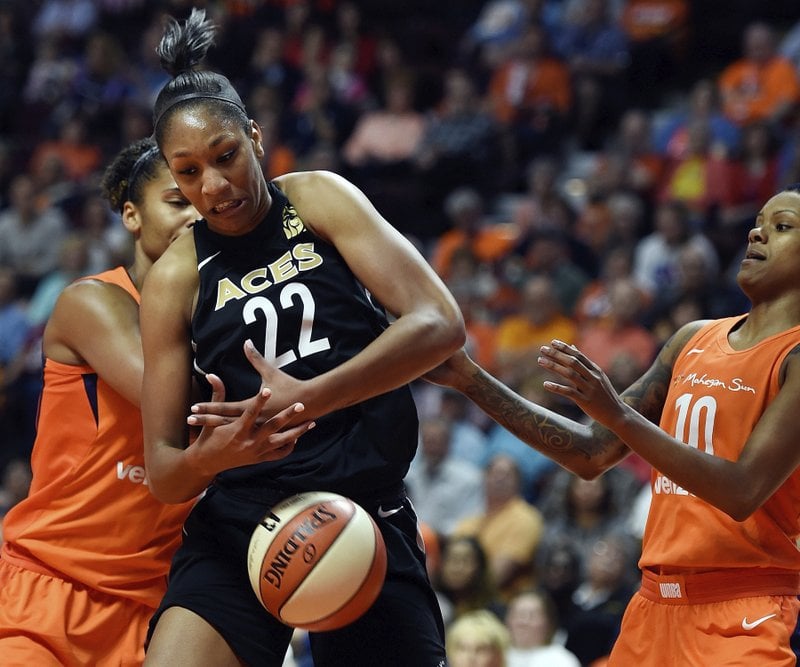 The Associated Press ROOKIE CAPTAIN: Las Vegas Aces forward A'ja Wilson (22) tries to get a rebound between Connecticut Sun forward Alyssa Thomas, left, and guard Courtney Williams during a May 20, 2018, WNBA game in Uncasville, Conn. Las Vegas will have a lot of their hometown players to root for at the WNBA All-Star Game on July 27. Wilson, the reigning rookie of the year, is one of the team captains. She'll be joined by Aces teammates Liz Cambage and Kayla McBride in the starting lineup.

NEW YORK -- A'ja Wilson is under a bit of pressure now as one of the captains of the WNBA All-Star Game.

She'll try and get Las Vegas teammates Liz Cambage and Kayla McBride on her squad for that matchup. The only problem is that Elena Delle Donne has the first pick in the draft.

"I might have to reach out to her and see," Wilson said in a phone interview Thursday night. "I need to get my teammates."

Wilson, the reigning WNBA Rookie of the Year, was thrilled to be voted in as a captain and starter for the game on July 27.

"It means a lot," she said. "Having been seen that way by the fans and media and coaches is special. People have been tweeting at me every single day, very supportive."

What makes it even more special for Wilson is that the game will be played in Las Vegas.

"It's amazing having it in Vegas. Our fans are really going to love everything we can bring for All-Star weekend," she said. "What better place to have it than in Vegas? Best of both worlds in everything. I know our staff and people behind the scenes are trying to make this weekend very good and go as smoothly as possible."

Fans make up 50 percent of the vote to determine the starters, while current WNBA players and a media panel accounted for 25 percent each.

The WNBA also announced Las Vegas' Bill Laimbeer and Washington's Mike Thibault as the coaches of the game. The two teams have the best records in the league as of Thursday.

Laimbeer will coach Delle Donne's team as the Aces have the best record in the league and Thibault will lead Wilson's since the Mystics have the second-best mark.

"I want to beat him bad," Wilson said. "We're both very competitive people. If I have my teammates alongside me, 'Oh man'."

"I'm just hoping for a good game," he said. "It's a chance to hang out with the best players. I'd like it to be a somewhat competitive game. It's harder when you don't have conference affiliation with that."

The league's coaches will vote for the 12 reserves -- three guards, five frontcourt players and four utility choices. Those will be announced Monday. Coaches can't vote for their own players.

Delle Donne and Wilson will pick their rosters beginning with the starters and then the reserves. Delle Donne's team lost to Candace Parker's squad last year in the All-Star Game. The Washington Mystics star led the fan balloting, receiving 32,460 votes followed by Wilson with 26,475. Griner tied with Mercury teammate DeWanna Bonner in the overall voting, but Griner was given the All-Star starting nod by having more fan votes.

Delle Donne and Griner were chosen for their sixth All-Star Game. Cambage, McBride and Gray have made it for the third time. Loyd, Jones and Wilson are All-Stars for the second time. Howard and Nurse will be making their All-Star debuts.

The WNBA added festivities for the night before the All-Star Game with a 3-point shootout, skills competition and beach party that Cambage will DJ at with Snoop Dogg and Ariana Grande.

"Liz is a legit one. She can handle her own. Just knowing her, she's a great DJ," Wilson said. "She gets into this mode and she's all into it."

Wilson said that she might have to negotiate to get into the DJ booth with her teammate.

"That would earn me huge cool points," she said.