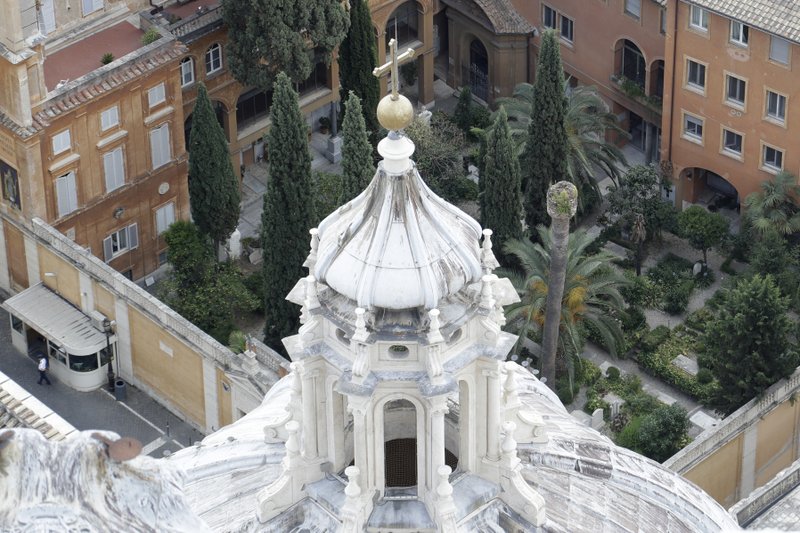 This picture taken on Wednesday, July 10, 2019 shows the view of the Teutonic Cemetery inside the Vatican. On Thursday, July 11, 2019 the Vatican opened a pair of tombs inside the cemetery after further investigation into the case of the 15-year-old daughter of a Vatican employee, Emanuela Orlandi, who disappeared in 1983 only to find that the tombs were empty. (AP Photo/Gregorio Borgia)

VATICAN CITY -- The tombs of two 19th-century German princesses were pried open at a tiny Holy See cemetery Thursday and turned out to be completely empty, dashing any expectations they held the remains of a teenager who vanished in 1983 after leaving her family's Vatican City apartment.

Emanuela Orlandi's disappearance is one of Italy's most enduring mysteries, and the opening of the tombs at her family's request was the latest search for possible leads to fail. Instead, the gravesite inspections raised only new questions: what happened to the remains of the two princesses who were buried in the side-by-side tombs in 1836 and 1840, respectively, in peaceful Teutonic Holy Field near St. Peter's Basilica?

"The tombs are empty. We are all amazed," Orlandi family lawyer Laura Sgro told reporters. It was Sgro who had received an anonymous letter suggesting the family check out the tomb in the cemetery where a stone angel holds a scroll reading in Latin "Rest in peace."

Witnessing the tomb's opening along with Sgro, and a technical expert for the Orlandi family was also Pietro Orlandi, whose 15-year-old sister disappeared after she went to her music lesson in Rome on June 22, 1983. The siblings' father worked as a messenger for the Vatican, and the family lived in Vatican City State.

The Vatican said in a statement that the opening of the tombs "yielded a negative outcome. No human remains nor funereal urns were found."

It said the inspection of Princess Sophie von Hohenlohe's tomb turned up an underground chamber measuring roughly 4 by 3.7 meters (13 by 12 feet) that was "completely empty." Then the stone lid of an adjacent sarcophagus of Princess Charlotte Federica di Mecklenburg was removed and inside "no human remains were found," the Vatican said.

It added that relatives of the two princesses were informed that the tombs of their loved ones were empty.

A Holy See spokesman, Alessandro Gisotti, said the Vatican is combing through documentation about two structural projects that involved the cemetery area, one in the late 1800s, and the other between the 1960s and 1970s, in case that work might explain why the princesses' remains weren't there.

The Vatican had announced it had engaged a forensic anthropology expert, who is a professor of forensic medicine at a Rome university, to examine the remains and prepare them for DNA testing. But that arrangement proved premature when no remains were found.