Langston reunion draws to a close 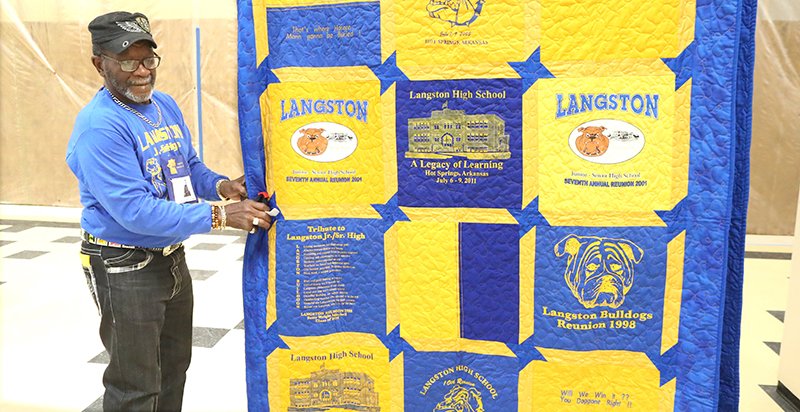 The Sentinel-Record/Richard Rasmussen BLUE AND GOLD: James Ford, Class of 1963, hangs a quilt made of reunion T-shirts up during the Langston Alumni Reunion picnic at Hot Springs World Class High School on Thursday.

Over 230 past students of Langston Junior and Senior High School gathered in Hot Springs this week for the Langston Alumni Reunion, which ends today.

The biennial reunion was primarily held at The Hotel Hot Springs & Spa with registration and a welcome program on Wednesday, a picnic in the cafeteria of Hot Springs World Class High School Thursday, breakfast and photos Friday and a memorial service and banquet today.

The 2019 reunion marked the 116th anniversary of the school and the 17th reunion held since its organization in 1980.

Langston was originally known as Rugg Street School because of its location. The segregated school graduated its first class of students in 1910. The original building was destroyed in a fire in 1913 and a new building was erected on Silver Street in 1914 with the name of Langston High School, named in honor of the Reformation Period black U.S. congressman from Virginia, John Langston. During that time, the high school served about 250 students each year.

In 1949, the institution became a junior and senior high school. In 1950, Langston received accreditation from the North Central Association, becoming the third African-America school in Arkansas to be so recognized by the national organization.

Langston students moved to a new building on Chestnut Street in 1964. Four years later, in 1968, Langston High School was dissolved as part of desegregation, and Langston became strictly a junior high school.

The Langston building on Chestnut Street is currently home to Langston Aerospace and Environmental Magnet School, which educates pre-K through fifth-graders. 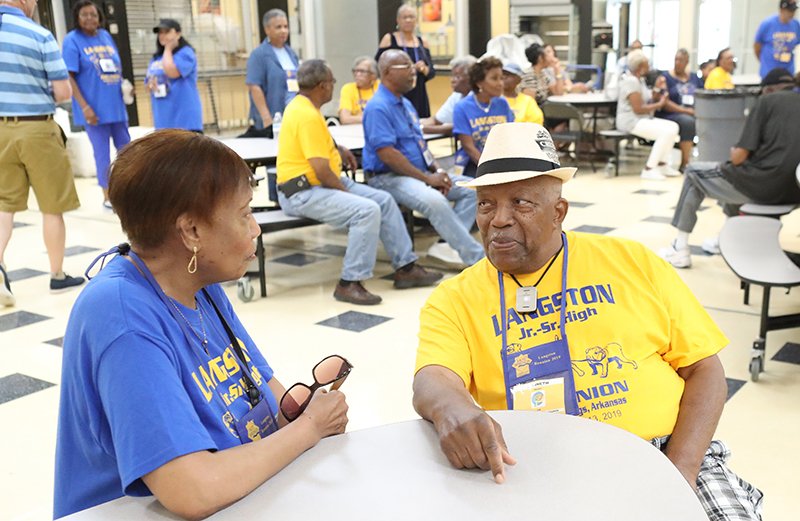 The Sentinel-Record/Richard Rasmussen OLD FRIENDS: Rose Blewett, left, and Kenneth Rhodes, both of the Class of 1953, chat during the Langston Alumni Reunion picnic at the Hot Springs World Class High School on Thursday.

As the reunion's program stated, the occasion is meant to serve as "a time of visiting familiar sites, renewing old friendships and stirring memories of the past," for past Langston Junior and senior high school students, teachers and their families.

During Thursday's picnic, several attendees shared their points of view with The Sentinel-Record on the importance and significance of the event.

"It's such a dwindling organization. It's one in which there's never, ever any new members. You're at a loss at that point. So we try to keep as many relationships and ties going as possible. But they're still as enthusiastic now as they were at the first one in 1980. Since 1980, a lot have been unable to come. But those who have been able to come, they've always enjoyed it," said 2017-2019 Langston Reunion board of directors president and school alum Charles Smith.

Charles Smith's brother, Kenneth, who is also on the board of directors, agreed, adding that "Going on our age, we need to be able to network with each other and enjoy the times and the memories and to have something to share and pass down to the next generation. We've seen families grow. We've seen members of our school remarry old classmates and stuff like that. It's just a good wholesome fellowship."

Kenneth Smith also saw the reunion as a chance to educate younger generations.

"They have brought some of their young ones from their families who have not experienced a period in which there were separate schools and everything. They like to hear as those stories are told and recalled. So they sort of get an idea of how it was during that time."

Kendall Calhoun, 10, of Waco, Texas, said she and her family drove nearly six and a half hours to attend the reunion with her grandmother and Hot Springs native Willye Cooper-Martin, vice president of The Langston Reunion's board of directors.

Calhoun said the food and music were some of her favorite aspects, saying "It's pretty good." She said she thinks other young people could benefit from attending such an event. "It's fun. You can learn a lot of things." She said she hopes to return for the 2021 reunion.

Calhoun's cousin, Kaleb Whipple, 7, traveled even farther to attend the reunion, flying in from Gary, Ind.

"It's been very significant in our lives and Langston is a great big part of my family, our family," Kenneth Smith said.