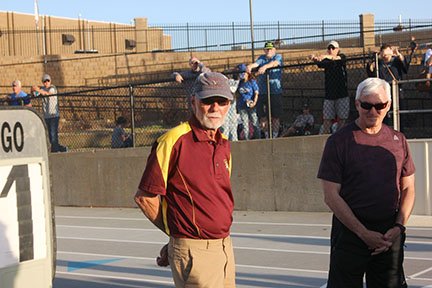 The Sentinel-Record/James Leigh--Lake Hamilton head track and field coach Karl Koonce, left, listens as his accomplishments are read prior to his &quot;final lap&quot; around the track near the end of the Lake Hamilton Invitational track meet on April 12, 2019. Koonce is The Sentinel-Record's Spring Sports Coach of the Year.

After 40 years of coaching, recently retired track and field coach Karl Koonce is no stranger to being recognized for his leadership and commitment to his athletes and students.

He has been a five-time Section Coach of the Year for Arkansas, Colorado, New Mexico, Oklahoma and Texas. In addition, he has been named Arkansas Coach of the Year 18 times and has coached 12 All-Americans in track and field. Earlier this month he was an inductee into the Arkansas High School Coaches Association Hall of Fame, and he was also a member of the inaugural Lake Hamilton Sports Hall of Fame induction held in February.

"I feel very privileged to be able to have had the opportunity to coach track and field and cross country, especially in the Lake Hamilton community with the wonderful administration and especially the students I got to work with," said Koonce.

In the release, NHSCA executive director Eric Hess stated that Koonce has "established Lake Hamilton as one of the best in Arkansas."

Koonce said that at first, he thought the award was for the boy's division of track and field since he had been given this title 10 years prior for another organization.

"It certainly is a honor for me to be recognized," Koonce said. "I don't know how it happened. It was kind of a surprise. It's a great honor. As I've said before, any honor that I get as a coach has to be shared with my assistant coaches and certainly my athletes."

As a child, Koonce's family was instrumental in him getting interested in sports. They would get together often to play multiple sports, and he went on to play basketball and run track -- the only two sports offered by Genoa School District -- in junior high and high school.

Getting involved in track and field at Henderson State University is what solidified his desire to coach, leading him to coach at two schools before landing at Lake Hamilton.

Koonce was on staff at Lake Hamilton for 38 years. As well as being coach of track and field and cross country, he also taught science classes.

When he began his journey at Lake Hamilton, Koonce didn't realize he would stay as long as he did and enjoyed playing a part in the lives of students who then grew up to teach alongside him.

"I found out it was something great to be a Lake Hamilton Wolf," Koonce said. "The community has been good to me. I love the sport of track and field. Looking back on it, it made me not have to go to work. Sometimes it's very tiring, but it didn't feel like work."

Koonce has plans to remain involved in sports at Lake Hamilton, supporting the Wolves. He has the plans to get a part-time job and has signed up to be a referee for track meets during the spring, traveling around Arkansas.

Koonce does have other retirement ideas in mind though.

"I want to do a little more fishing," he said. "Some of my old, retired buddies are fishermen, and I want to do that occasionally. My wife does a little bit of photography, so I'll be helping her with that some. A little bit more relaxing, not as stressful as what it's been."

The recipients were sent a plaque and will be featured in a National High School Digital Sports Hall of Fame that the NHSCA is putting together.