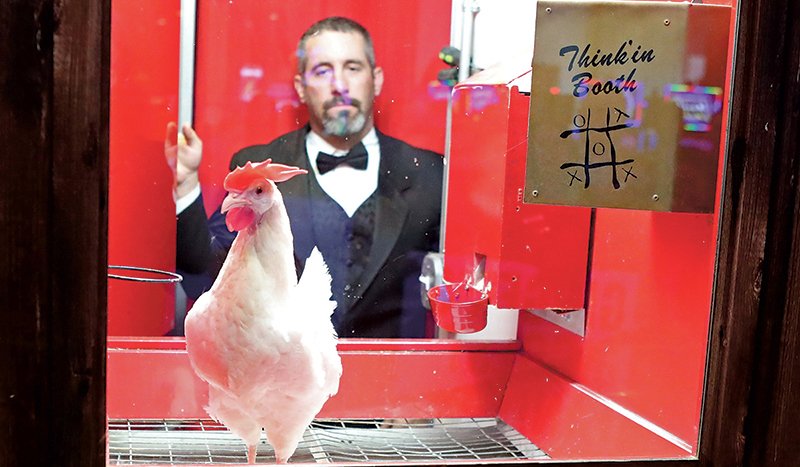 The Sentinel-Record/Richard Rasmussen CHICKEN CHALLENGE: Kelly Boger, operator of the Casino Chicken company, puts Ginger the chicken into the Chick-Tac-Toe booth at Oaklawn Racing Casino Resort on Friday as the Red Coat Ambassadors cut the ribbon on the new promotion.

Starting today, guests of Oaklawn Racing Casino Resort can challenge Ginger the chicken to a round or two of Chick-Tac-Toe.

On Friday, Oaklawn, along with Red Coat Ambassadors from The Greater Hot Springs Chamber of Commerce, cut the ribbon on the promotion, which will remain next to Player Services on the gaming floor through July.

"This is the winner of the Best Casino Promotion for several years running, and this actual promotion has been all over the country, and actually all over the world," Joan Botts, director of marketing, told guests gathered to witness the feathered competitor make her grand entrance.

"The tic-tac-toe playing chickens were actually a key attraction at a former Hot Springs attraction here called the IQ Zoo," she said. "Kelly Boger ... the Boger family actually stemmed from that original IQ Zoo so, for us, the chickens are returning home. This is a homecoming for them and we're excited to have Kelly here with us."

Guests who beat Ginger will win a T-shirt and up to $500 in free play, Botts said.

Boger, operator of the Casino Chicken company, said his family acquired the chickens and equipment from Bob and Marian Bailey 30 years ago. Bob Bailey, Boger said, originally trained animals for the U.S. military.

"We moved (Chick-Tac-Toe) more into the casino industry where more people could see it," Boger said. "We mainly just do the tic-tac-toe chickens now."

The game is a hit with guests everywhere it makes a stop, he said. When asked how common it is for people to outsmart the chicken, Boger said it depends on which chicken is playing, as some are smarter than others.

Chick-Tac-Toe will be played Mondays and Wednesdays through Saturdays from noon to 10 p.m. According to a news release, guests must have 10 points on their Oaklawn Rewards card for their first play and can earn up to three additional plays for every 50 points earned.