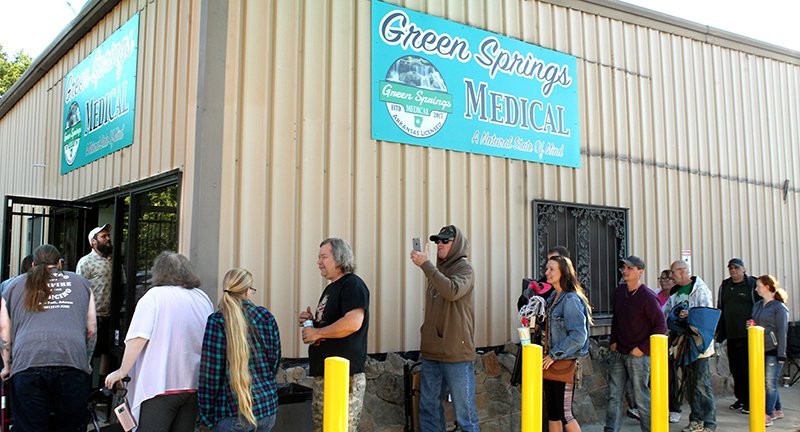 The Sentinel-Record/Richard Rasmussen OPEN FOR BUSINESS: About 70 people were in line outside Green Springs Medical on Seneca Street when it opened shortly after 8 a.m. on Monday, May 13, 2019. The medical marijuana dispensary was the first to open within the city limits of Hot Springs. - Photo by Richard Rasmussen

The only medical marijuana dispensary licensed to operate inside Hot Springs had its biggest week since opening last month.

Green Springs Medical at 309 Seneca St. sold 27.27 pounds from noon May 24 through noon Friday, according to sales figures provided by the Department of Finance and Administration. From its May 12 opening to noon Friday, the dispensary sold 70.09 pounds.

It and Doctor's Orders RX at 4897 Malvern Ave. are the only dispensaries in operation of 32 licensed statewide. Through noon Friday, the latter had sold 37.74 pounds since the state's first legal sale of the drug was transacted there May 10.

The two locations could have competition soon, DFA said, as Arkansas Natural Products in Clinton is scheduled to be inspected Thursday. Greenlight Dispensary in Helena-West Helena informed DFA of its intent to open by mid-month, but it hasn't scheduled an inspection date.

Green Springs had 6,533 transactions through noon Friday. DFA said tracking software registers the sale of any individual marijuana strain as a transaction, meaning if one patient purchased two strains it would register as two transactions. Doctor's Orders had 3,408 transactions.

Patients are prohibited from purchasing more than 2.5 ounces over 14 days.

All strains are sourced from Bold Team's Cotton Plant cultivation facility, but a spokesman for Doctor's Orders said Natural State Medicinals in White Hall is expected to have product available soon. The two cultivation sites are among the five licensed to operate statewide.

DFA said the constitutional amendment legalizing medical marijuana in Arkansas gives the state no oversight on pricing, leaving it to the market to set prices. The two dispensaries operating in Garland County have said they charge $15 per gram, a cost Arkansas Blue Cross and Blue Shield said is not covered under its prescription drug plan as a result of marijuana being illegal under federal law.

The state law's disharmony with federal drug laws limits transactions to cash only, as financial services such as credit card processing and banking are unavailable to the medical marijuana industry.

DFA said the first of the monthly sales reports dispensaries are required to submit is due this month.