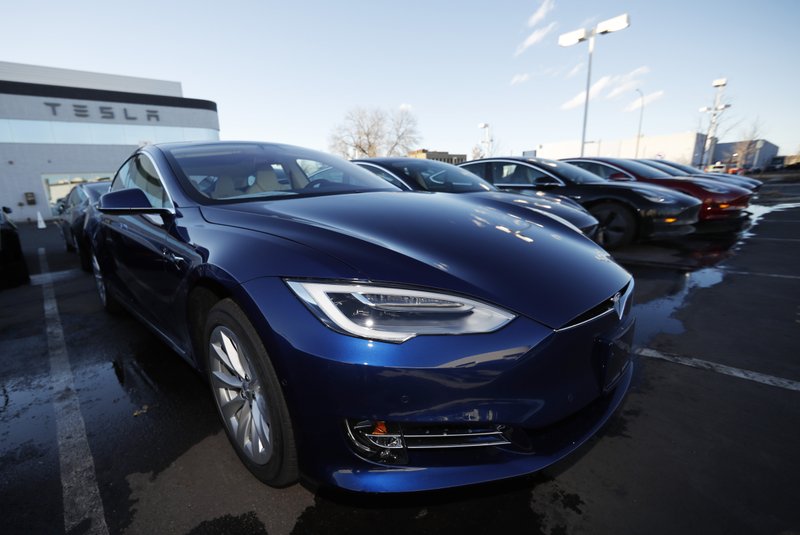 FILE - In this Sunday, Feb. 3, 2019, file photograph, an unsold 2019 S75D sits at a Tesla dealership in Littleton, Colo. Rising trade tensions have sparked worries about the 17 exotic-sounding rare minerals needed for high-tech products like robotics, drones and electric cars. China recently raised tariffs to 25% on rare earth exports to the U.S. and has threatened to halt exports altogether after the Trump administration raised tariffs on Chinese products and blacklisted telecommunications giant Huawei. (AP Photo/David Zalubowski, File)

PHOENIX -- Rising trade tensions between the U.S. and China have sparked worries about the 17 exotic-sounding rare earth minerals needed for high-tech products like robotics, drones and electric cars.

China recently raised tariffs to 25% on rare earth exports to the U.S. and has threatened to halt exports altogether after the Trump administration raised tariffs on Chinese products and blacklisted telecommunications giant Huawei.

With names like europium, scandium and ytterbium, the bulk of rare earth minerals are extracted from mines in China, where lower wages and lax environmental standards make production cheaper and easier.

But trade experts say no one should panic over China's threats to stop exporting the elements to the U.S.

There is a U.S. rare minerals mine in California. And Australia, Myanmar, Russia and India are also top producers of the somewhat obscure minerals. Vietnam and Brazil both have huge rare earth reserves.

"The sky is not falling," said Mary B. Teagarden, a China specialist, professor and associate dean at the Thunderbird School of Global Management in Phoenix. "There are alternatives."

Simon Lester, associate director of the center for trade policy studies at the Cato Institute think tank in Washington, agreed. "Over the short term, it could be a big disruption, but companies that want to stay in business will find a way," he said.

Although the U.S. is among the world's top 10 countries for rare earths production, it's also a major importer of the minerals, looking to China for 80% of what it buys from other countries, according to the U.S. Geological Survey. China last year produced some 120,000 metric tons of rare earths, while the United States produced 15,000 metric tons.

The United States also depends on China to separate the minerals pulled from Mountain Pass Mine, the sole rare earths mine in the U.S., which was bought two years ago by the Chicago-based JHL Capital Group LLC .

"We need to develop a U.S.-based supply chain so there is no possibility we can be threatened," said Ryan S. Corbett, managing director of JHL Capital.

The mine's top products are neodymium and praseodymium, or NdPr, two elements which are used together to make the lightweight magnets that help power electric cars and wind turbines and are found in electronics such as laptop hard drives.

Mountain Pass, located in San Bernardino County, California, was once top supplier of the world's rare earth minerals, but China began taking over the market in the 1990s and the U.S. mine stopped production in 2002.

Since then, Mountain Pass has focused on achieving greater autonomy with a $1.7 billion separation system set to go online late next year that would allow it skip sending rare earths ore to China for that step.

China could hurt itself in the long run by cutting off the U.S., specialists said.

David Merriman, a rare earths analyst for Roskill commodity research in London, said that during a similar trade flap with China in 2011, Japan began looking to other countries including Australia for the minerals needed to manufacture electronics.

There may be other options, too. Deposits of rare earths have been detected in other U.S. states including Wyoming and Alaska, as well in several remote areas of Canada. The Interior Department is calling for more prospecting and mining of "critical minerals," including on public lands currently considered off-limits, and even in oceans.