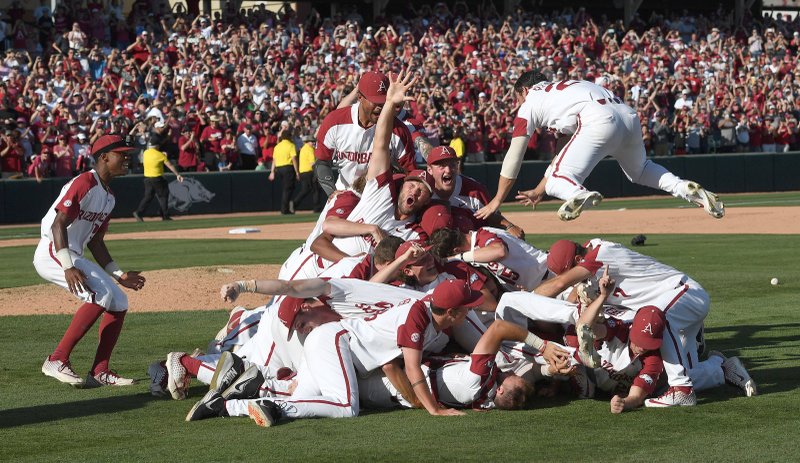 FAYETTEVILLE -- Arkansas secured a second straight trip to the College World Series by crushing Ole Miss 14-1 in the deciding game of its super regional Monday.

The Razorbacks (46-18) took control with a four-run second inning, scored three more in the third and added five in the sixth.

Reliever Cody Scroggins worked 4 1/3 scoreless innings, striking out eight, to earn the win. The right-hander replaced starter Patrick Wicklander with two outs and the bases loaded in the second inning with a 2-1 count on the batter.

Scroggins, who signed with Arkansas as a middle infielder before converting to pitcher in 2016, did not walk a batter and gave up two hits, one of them an infield single. He was selected by the Boston Red Sox in the ninth round of this year's MLB draft.

Arkansas had 12 hits off four Ole Miss pitchers, including six for extra bases, and was 8-for-15 with runners in scoring position.

Kjerstad doubled in the second and scored on Opitz's single to tie the game at 1-1. Jacob Nesbit drove in a run with a single, and Trevor Ezell singled to right to score two more.

Kjerstad doubled into the right-field corner in the third to drive in two runs, and Opitz added an RBI single for a 7-1 lead.

That was more than enough for Scroggins, who had Tommy John surgery in 2017. Monday was his longest outing since March 31, when he went four innings in a start against Ole Miss (41-27) and allowed five hits and walked five in a no-decision.