Today's Paper Obits Mugshots Sports Classifieds Jobs HER Magazine Crime Contact us Subscribe to our newsletters
ADVERTISEMENT
Griffin struggles in first round of tourney by STAFF REPORTS | June 26, 2019 at 4:00 a.m. 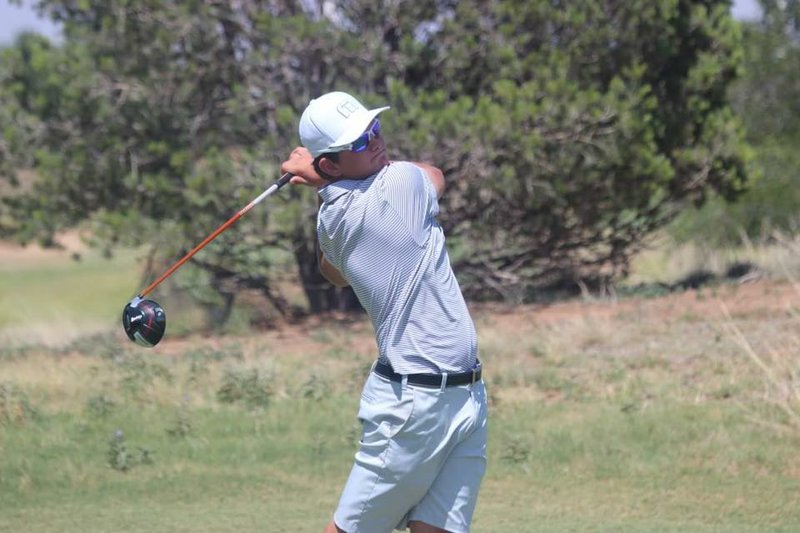 Submitted photo HITTING IT BIG: Lakeside rising junior Wil Griffin tees off Sunday during the AJGA Under Armour/Jordan Spieth Championship Qualifier at Cedar Crest Golf Course in Dallas, Texas. Griffin finished fourth in the qualifier and is competing in this week's Under Armour/Jordan Spieth Championship at Trinity Forest Golf Club that runs through Thursday.

Lakeside rising junior Wil Griffin is trying his hand against some of the top competition in the region after qualifying for the AJGA Under Armour/Jordan Spieth Championship.

Griffin finished the first round of the tournament Tuesday with an 11-over 83 at Trinity Forest Golf Club, just two days after finishing tied for fourth in the qualifying round on Sunday at Cedar Crest Golf Club in Dallas, Texas.

Griffin struggled early, carding a 4-over 36 on the back nine after his start at No. 10, but things improved for him at the turn where he hit par on seven of nine with two bogeys for a 2-over 36.

"He finished strong," said Monte Griffin, Wil's father. "He had a couple lost balls that led to a double bogey and triple bogey on those two holes. But he played pretty well. This was his first experience at this level."

Wil Griffin said that the course was more difficult than he expected.

"The course was difficult," he said. "The greens are fast and firm."

He had a better performance on the front nine, bogeying on No. 2 and No. 9. Course rules left him having to drop on a natural cart path after a bad shot.

The younger Griffin has played on the Texas Junior Golf Association circuit for the past couple years, playing a couple tournaments that were limited to 12--15 year olds, but this is his first time to play in an junior open, leading to a few nerves on the course.

"It's been good, especially because I had to qualify to be here," he said. "I had to play my way in. Age really isn't that big a deal for me."

Monte Griffin said that some of the additional nerves may have come from the fact that many college coaches are in attendance for the tournament.

"There are coaches from Baylor, Oklahoma, a lot of SEC schools, Big 12 -- all the Big Five," he said. "And all the local schools are here and some other smaller DI schools. They are looking for talent and potential players. It's a different environment from what he sees at home."

The younger Griffin said that he anticipates a better performance going forward.

He will tee off for today's second round at 8 a.m. on No. 1. The only male golfer from Arkansas, he is paired with Tate Herrenbruck and Cooper Schultz, both rising seniors from Kansas.

Runners, walkers, marchers and dancers of all ages and abilities are encouraged to participate. The $25 registration fee will provide a souvenir race bib, finisher's medal, race t-shirt and prize eligibility, and the course covers a mix of paved surfaces with scenic views of the lake and single track trails through the pine forest.

There will also be a patriotic costume contest where participants will dress and run in their most patriotic and family-friendly costumes for a chance to win a two-night stay in one of the state's five lodge state parks. The winner of the costume contest will be announced during the medal ceremony after the race.

The overall winner of the race will also win a two-night stay at one of the state parks. Age-group winners will win an interpretive multi-pass for select tours and programs at DeGray Lake Resort State Park.

For additional information, contact the visitor center at (501) 865-5810 or visit http://www.degray.com. The park is located near Hot Springs and Arkadelphia, six miles north of I-30 at Caddo Valley (exit 78) or 21 miles south of Hot Springs on Highway 7.

Students in grades 4-6 who live in the district are eligible to register for the program, and registration forms can be picked up at Hot Springs High School.

Volunteers must be approved by Trojans head football coach Darrell Burnett and may be subject to a background screening. For more information, contact Burnett at 501-624-5286 ext. 1144.

Print Headline: Griffin struggles in first round of tourney