Reading camp draws to a close

A summer camp that is designed to help students who may struggle with reading get ready for the coming school year wrapped up Thursday.

The inaugural Cutter Morning Star Summer Reading Camp for kindergarten, first- and second-grade students, in partnership with Arkansas Learning Through The Arts, was designed to assist students who have been identified through targeted testing as struggling with reading to enhance their skills for the coming school year.

"We have a diverse population as far as reading levels go here. So as we were working with those children, we realized we needed something to extend the school year so kids would not lose what we had worked so hard to gain in the school year," said Cutter Morning Star Elementary School Principal Terry Lawler.

"If you can have a child on grade level by third grade, statistics say that they will be successful in school. However, the opposite is also true. Every child can learn to read. There's not a doubt in my mind. But it's all about exposure and time with quality instruction, with trained staff, with the right resources. And that's what we're trying to do."

Each Monday through Thursday in June, from 8-11 a.m., 41 students regularly attended the camp. To make attendance feasible, the school arranged for two different bus routes to pick up and drop off children and made breakfast and lunch available at school.

The teaching artists that spoke to students each week were one of two "key components" of the camp, Lawler said.

"Craig (Welle) and his staff met with us early. We had done their workshops that they offer all schools, but I asked them to do something different," Lawler said.

She said school officials spoke with ALTTA representatives, submitted lessons plans, and suggested artists and workshops created by ALTTA for the camp.

During the program's first week, Lanie Carlson instructed students in theater; the second, Jerri Hillis exposed them to visual arts; the third, Chana Caylor taught music and songwriting; and the fourth and final teaching artist was Kai Coggin, who covered literature, poetry and creative writing.

"We've been reviewing what they've learned over the past four weeks with all the different artists. We were talking about feelings, and poetry is about expressing their feelings. With the theater teacher in the beginning, they learned how to act out their emotions. An artist came in as a painter, and they connected feelings to colors. We're learning how to express these feelings and use our words instead of holding it all in today," Coggin said. 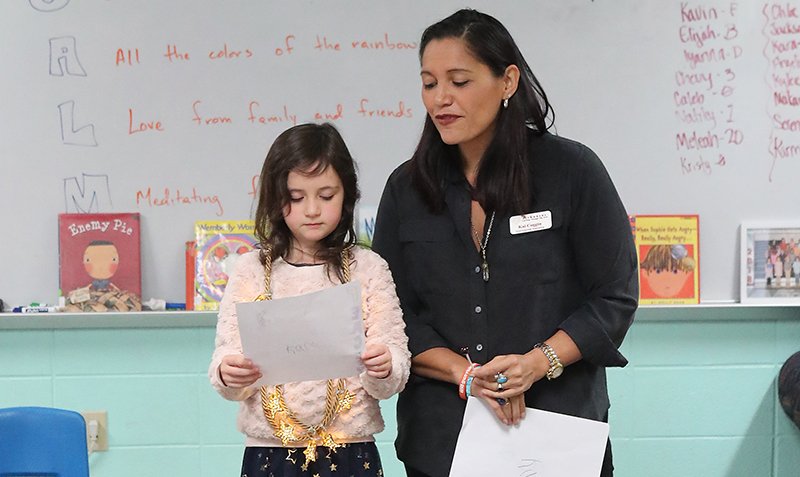 Students presented original acrostic poems and illustrations about a chosen emotion to the class.

Executive Director Craig Welle said this sort of activity is exactly what ALTTA aims to do in schools.

"What our focus on is really engagement. Fun is a part of being engaged. Because if they're not engaged, they're not learning," Welle said.

The second "key component" of the camp was the reading therapy class, Lawler said.

"We screen every single one of our kindergarten through second-graders for markers of dyslexia, hoping to catch it early. If we don't catch them up on their reading skills quickly, with a very specific phonics based, multisensory program, they will fall further and further behind in reading," she said.

One activity used to assist students in this category was reading bingo. This game involved repetition of words, exaggerated pronunciation, seeing words and letters visually, and learning how to correctly form words orally.

"It inputs it into their brain in different ways," reading therapist Susanna Crow said.

"I so much appreciate the Hot Springs Community Foundation and the Arkansas Community Foundation. Without their support, we would not have had two of the most important parts of our formula, those are the artists and the reading therapists. That is what has made this such a special, successful program," Lawler said.

Lawler also said she hopes to bring the program back next summer, and add an attendance incentive, such as a field trip to Mid-America Science Museum.

"This is our first year to do this, so we just tried to keep it simple. But we have so many ideas for next year. We know we have a plan. We have the formula, the components: that strong literacy unit taught by a strong classroom teacher, with support and the best resources," she said.