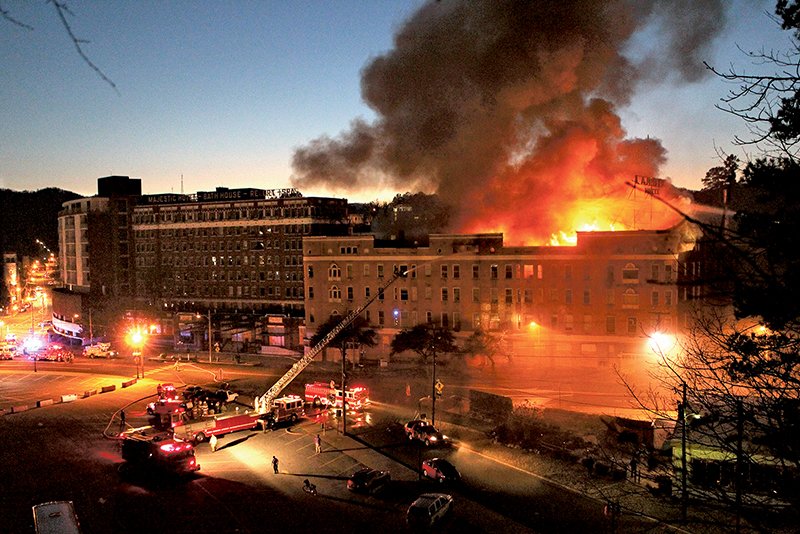 The Sentinel-Record/Richard Rasmussen The Hot Springs Fire Department pours water onto the oldest building of the Majestic Hotel complex as it is consumed by fire on Feb. 27, 2014.

Fifty for the Future on Thursday unveiled a project to promote the redevelopment of the Majestic Hotel site as an outdoor thermal pool complex and multiuse plaza.

The project was announced Thursday night during Fifty for the Future's annual members meeting, held one day after the five-year anniversary of the massive fire that consumed the original Majestic Hotel.

In a news release issued prior to the start of the meeting, Fifty for the Future President Wayne Smith said that while the organization is not in a position to fund the project, it is requesting that the city of Hot Springs include a thermal pool complex as an option for consideration in an upcoming feasibility study.

The organization's plan envisions the complex as a series of small terraced pools toward the back of the 5-acre site. Other amenities, such as a changing facility, nature trails and picnic areas would be included.

"The site could also include restaurants, retail outlets and a performing arts plaza," the release said.

"The project would be similar to thermal pool complexes located in Colorado," it said.

A video about the project is available at https://youtu.be/5MSQCDPSSQc. The project's website is located at http://themajesticsite.com/.

A copy of a brochure released Thursday cites the perennial question asked by visitors: "So, where are the Hot Springs?"

"As the namesake for our city and national park, the thermal hot springs are sought after by travelers. Except for a few hot water displays on Bathhouse Row, visitors miss out on what could be a quintessential 'Spa City' experience," the brochure says.

The brochure cites a 1992 feasibility study that said a thermal pool complex "has the potential for broad market appeal if properly designed."

Around 700,000 gallons of thermal water is collected by the National Park Service from the springs on the side of Hot Springs Mountain, according to the brochure, with a surplus of around 300,000 gallons per day.

According to the Hot Springs National Park website, 700,000 gallons of thermal water are collected each day in the hot spring water reservoir. The hot springs only emerge at the base of Hot Springs Mountain, on the western slope, through a fault, and do not occur anywhere else in the park except in the downtown area.

The city acquired the 5-acre site in September 2015 from Park Residences Development for $672,872 after condemning it earlier that year. Almost $1.4 million was spent from the solid waste fund to demolish three condemned structures and remove the remains from a February 2014 fire at the"yellow brick" building.

The city has said the public will be involved in the next phase, sharing its vision for how the property should be redeveloped during input sessions facilitated by Kansas State University's Targeted Assistance to Brownfields program. Those ideas will be distilled into visual form through renderings created by students at the University of Arkansas' Fay Jones School of Architecture and Design.

The city said the input sessions are expected to be held next month.

Fifty for the Future is a nonprofit 501(c)(4) social welfare organization which, according to the IRS, is to be operated exclusively to promote social welfare.

The organization, founded in the late 1980s, currently has more than 100 members. The news release said its mission is to "promote progress and economic development in Garland County."

"Since 1988, Fifty for the Future has contributed almost $1 million to support dozens of community projects," the release said.

The organization over the years has cited its involvement in attracting the Arkansas School for Mathematics, Sciences, and the Arts to Hot Springs, the reopening and growth of Magic Springs, the construction of the Hot Springs Convention Center and Bank OZK Arena, the Mid-America Science Museum expansion, and construction of the Greenway Trail, the Exchange Street Parking Plaza and road projects.