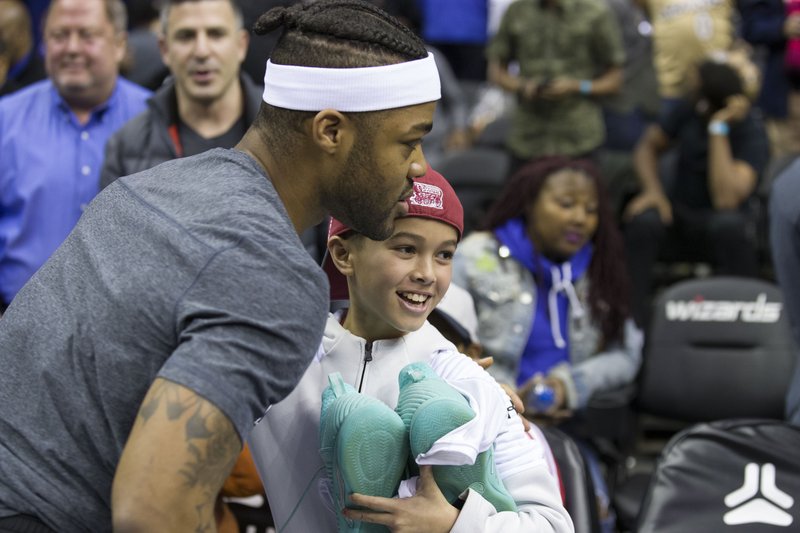 The Associated Press LET HIM PLAY: Sacramento Kings guard Frank Mason III, left, poses for a picture after giving his signed game shoes to Garrison Davidson, 11, from Washington after Monday's game against the Washington Wizards in Washington. Davidson repeatedly yelled for the coach to put Mason in the game. The Wizards won 121-115.

A night after Gordon ended a streak of 43 straight games where Harden led the team in scoring, the Beard was Houston's top scorer again. But Gordon had another strong outing, making five 3-pointers for the third straight game and the fourth in five games.

The Rockets won despite a big performance by Kemba Walker, who finished with 40 points, 10 rebounds and seven assists as the Hornets lost their second in a row.

Westbrook appeared to argue with fans of the Jazz, who knocked the Thunder out of the postseason last year.

Williams came into the game needing 28 points to pass Dell Curry, who had 11,147 points when not starting. Williams surpassed Curry with 9:53 remaining in the fourth quarter with a driving layup.

It is also Williams' 29th career game with 30 or more points. According to the Elias Sports Bureau, starters and reserves were tracked in box scores beginning with the 1970-71 season.

Terry Rozier led the Celtics with 26 points while Jaylen Brown added 22 and Kyrie Irving 18. Boston had a three-game winning streak snapped as it was trying to become the second Eastern Conference team this season to win all four games in California.

Allen Crabbe finished with 14 points and 10 rebounds, Rodions Kurucs scored 13 points, and Joe Harris and Caris LeVert each added 12 as the Nets took control early in the game and never let up.

The Nets (36-33) won their fourth straight and leapfrogged Detroit (34-32) into the No. 6 spot in their final game before leaving for a seven-game road trip.

Andre Drummond led the Pistons with 13 points and 20 rebounds. Blake Griffin finished with 10 points, but only shot 1 of 10 from the field as Detroit was held to its lowest point total of the season. The Pistons had their five-game winning streak snapped.

Toronto's Serge Ibaka and Cleveland's Marquese Chriss were ejected for fighting late in the third quarter. Ibaka went to the floor after the two were battling for position under Cleveland's basket as the Raptors attempted a full-court pass that sailed out of bounds.

Ibaka shoved Chriss from behind and grabbed near his neck before throwing a punch. Chriss responded with a punch before players from both teams separated the two. Ibaka immediately headed for the locker room and both players were kicked out after the officials conferred.

Kawhi Leonard scored 25 points after sitting out Sunday's victory in Miami, but his return didn't help the Raptors, who have the league's second-best record.

Jabari Parker added 18 points off the bench and Bobby Portis had 17 points and 13 rebounds as Washington began a five-game homestand.