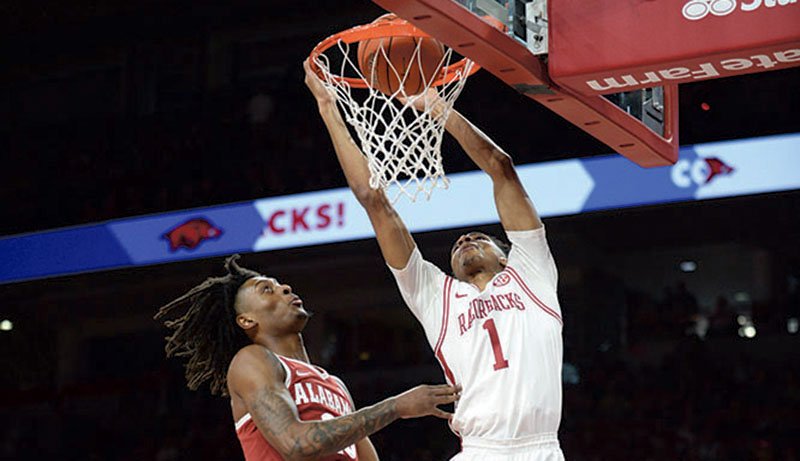 NWA Democrat-Gazette/Andy Shupe HOT FINISH: Arkansas freshman guard Isaiah Joe (1) dunks the ball over Alabama guard John Petty during the first half of Saturday's game in Bud Walton Arena in Fayetteville. The Razorbacks are looking to extend their three-game win streak while Florida is looking to break its three-game losing streak in today's SEC tournament matchup.

What do the contrasting streaks mean for today's game?

"Nothing at all," Gators coach Mike White said. "I just think it's a clean slate for everybody in the league.

"You've got a bunch of parity in the middle of the SEC where both of us sit. Anything can happen."

Florida brought a three-game winning streak into the SEC Tournament last season in St. Louis, but it lost its first game to Arkansas, 80-72, after the Razorbacks beat South Carolina in their opener, 69-64.

"It's not a matter of how well they're playing or how well we're playing going into it," White said. "It's those 40 minutes when we tip it up and who plays better then. That's it."

Arkansas will be out to avenge a 57-51 loss to Florida in Bud Walton Arena in the SEC home opener on Jan. 9.

It was the lowest-scoring home game for the Razorbacks in eight seasons under coach Mike Anderson.

"They came in and stole one," Anderson said.

Arkansas sophomore forward Daniel Gafford, who is averaging 17.0 points but was held to nine against the Gators, didn't want to talk about getting another shot at them.

"I really can't even say a lot about Florida," Gafford said. "I'm just going to let y'all wait and see."

The Razorbacks likely need to win the SEC Tournament to quality for the NCAA Tournament automatically.

But could making the SEC Tournament final or even semifinals be enough for Arkansas to slip into the NCAA Tournament considering today's winner faces conference regular-season champion LSU on Friday?

Arkansas went into the 2007 SEC Tournament 18-12, including 7-9 in conference play, and made the NCAA Tournament as a No. 12 seed after reaching the final before losing to Florida, 77-56.

"For this team here, it's just one game at a time," Anderson said. "That's all we're thinking about right now."

The Razorbacks and Gators have the same overall record, but Arkansas is No. 64 nationally in the NCAA's Net rankings while the Gators are No. 33 thanks to a schedule that has included Michigan State and Florida State in non-conference play and two SEC games each against Kentucky, Tennessee and LSU -- all teams ranked in the top 12 of The Associated Press poll.

Beating Arkansas might be enough to guarantee an NCAA Tournament bid for Florida.

"I'm not going to worry about bracketology," White said. "I'm going to spend all of my time and energy focused on Arkansas and playing as well as we can possibly play against these guys.

"That's just our philosophy. It's about the guys. That's what we can control. We can't control anything else."

Junior forward Adrio Bailey said the Razorbacks' goal is to win the SEC Tournament, not make a nice run.

Anderson has liked his team's approach late in the season.

"Obviously, there's a lot of chatter here and noise over there," Anderson said. "But I think our guys have done a good job of staying focused on getting better."

Arkansas suffered a sixth consecutive loss -- the longest in Anderson's 17 seasons as a college head coach -- when No. 4 Kentucky rallied to beat the Razorbacks 70-66 in Rupp Arena, but pushing the Wildcats to the limit was the start of a late-season surge that has included victories over Ole Miss 74-73, at Vanderbilt 84-48 and over Alabama 82-70.

"We feel like we're playing a lot better than we were earlier in the year," Anderson said. "We're taking care of the basketball. We're defending a whole lot better. We're going through our big guy [Gafford] in terms of trying to make some plays for us.

"It seems like we're starting to put some things together. Guys are a lot more comfortable in their roles."

The Razorbacks -- with six newcomers among the nine players in their rotation -- have gone through the rigors of the SEC schedule, but now they're facing the prospect of a loss ending their season.

"For our team, because of what has taken place throughout the year, if somehow we can get past that first game, I think the depth we've created plays to our advantage.

"I think these guys look forward to the challenges of advancing in the tournament."