Today's Paper Obits Mugshots Sports Classifieds Jobs HER Magazine Crime Contact us Subscribe to our newsletters
ADVERTISEMENT
NPC Walks a Mile in Her Shoes by Emily Baccam | March 14, 2019 at 4:00 a.m. 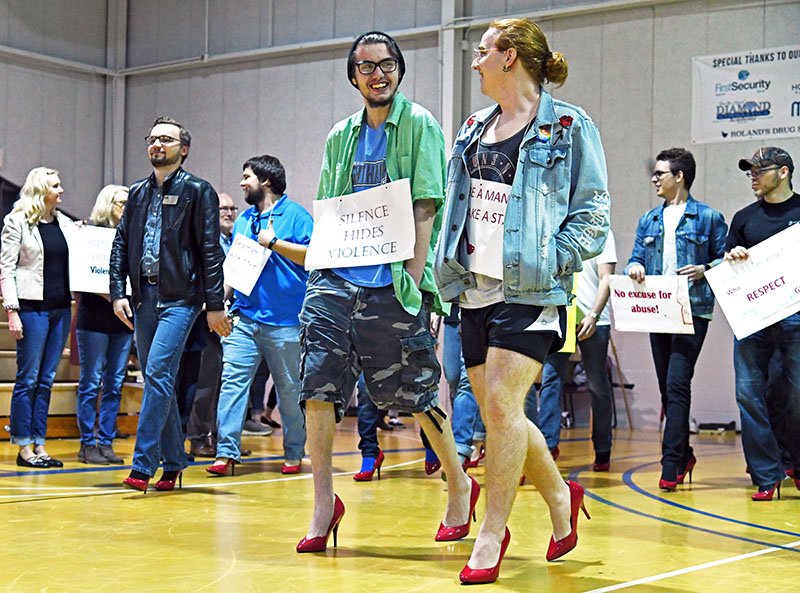 The Sentinel-Record/Grace Brown STRUTTING THEIR STUFF: Students and staff at National Park College participate in the Walk a Mile in Her Shoes event in honor of Women's History Month on Wednesday.

Male members of the faculty, staff and student body at National Park College donned red high heels Wednesday to participate in the nationwide Walk a Mile in Her Shoes event to raise awareness about sexualized violence and domestic abuse.

The event, featuring 17 "walkers," was held in the campus's gym complex, or "The Kettle," as part of Women's History Month.

"These red shoes are a really catchy and playful way to draw interest so that we can get the message out. It advocates support for helping possible victims of domestic abuse, and so we also have some community resources here to talk about how they can help," said Darla Thurber, the college's vice president for external affairs.

The shoes were purchased with Student Activities Board funds, so no one would be prevented from participating and are reused each year.

Now in its third year, the event was originally planned to be held outside on the Quad, but was held inside the Kettle due to inclement weather.

She said Arkansas consistently ranks first in the nation regarding the number of African-American women murdered by a partner, and the number one cause of emergency room visits in the state is domestic violence. Also, women who leave their abusers are at a 75 percent greater risk of being killed by their abuser than those who stay.

In Garland County, during the 2017-18 year of data collection, 847 people sought assistance for domestic abuse related issues. The figure does not account for abuse victims who did not seek help.

"It's so sad that Arkansas is number one in some of the most terrible things and then we're number 40-something in educational attainment. This is all backwards. We need to be changing these numbers," said Thurber.

"The Red Flag Campaign is about bystander awareness. It's if you see something, say something. So that we all on this campus take responsibility for noticing people who may be experiencing sexual violence," said Millerd.

After the speeches, the men lined up on the baseline of the basketball court and began their trudge.

The walk was only intended to consist of one lap around the court, but participants chose to continue the event and walked two full laps in solidarity.

Walk a Mile in Her Shoes held significance for many of the men taking part.

"It helps female students and staff and faculty realize that some of us may be big, gruff looking guys, but we are aware of these issues and we do want to be supportive," said Christopher Thrasher, NPC history professor and honors program director, who was participating for his third year.

"I feel vulnerable right now, and so I'm sure this is probably how many women feel whenever they go through lots of trauma or are discriminated against, or not getting equal pay. It's important. We have to help lift women up," said NPC alumni Roger Powell.

"It's a good opportunity for a lot of men on our campus, students, faculty, and staff, to kind of show our support for our female counterparts and really just let them know that we understand a lot of the struggles that they have. This is just a small thing. We kind of make light of it, and it's something fun and silly that we do. But really it's a much larger problem and we want to show that we are serious about supporting our female counterparts," said Jason Hudnell, NPC's dean of Enrollment and athletic director, also a veteran walker of three years.

Austin Oglesby, NPC student and co-founder of the LGBT campus club Pride Hawks, said it was his first year walking, but it will not be his last.

"It thought it was amazing, and I will be participating again next year," he said.

According to several participants, walking in the heels was no easy task.

"Everything. It really just hurts. It's really the toe. That's something I never realized. There's no human foot, I don't think, that's really that shape," Thurber said.

"You know, it's just sad really. You walk on your toes. The longer you wear them, the more difficult it becomes. It builds some great calves. I may have my guys start wearing them so we can jump a little bit better," Hudnell said.

Print Headline: NPC Walks a Mile in Her Shoes