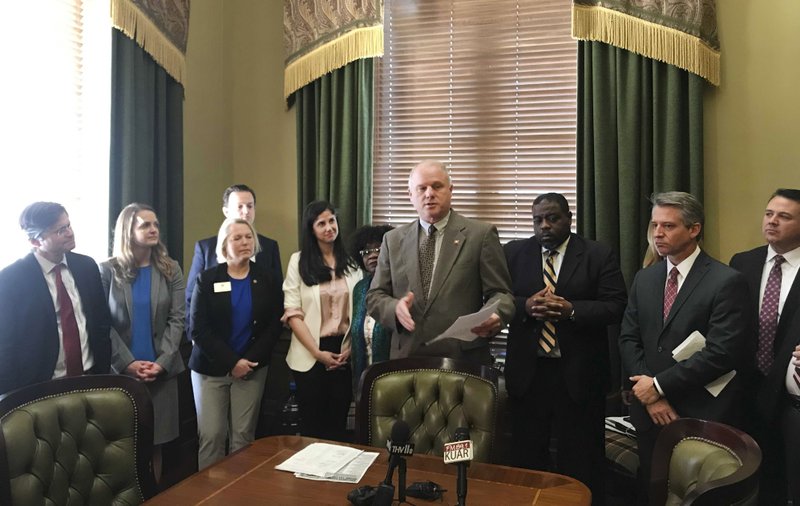 LITTLE ROCK -- The Republican leader of the Arkansas Senate and a bipartisan group of lawmakers on Thursday proposed raising taxes on cigarettes and e-cigarettes to pay for tax cuts for the state's low- and middle-income residents.

Flanked by more than a dozen lawmakers from both parties, Senate President Jim Hendren detailed the $100 million plan that he says will go before a legislative committee next week.

"Arkansas has a very regressive tax code. ... The purpose of this legislation today is to begin to adjust some of that," Hendren said.

The proposal comes after the majority-Republican Legislature last month backed GOP Gov. Asa Hutchinson's proposal to cut the state's top income tax rate. Democrats complained that the benefits of the cut, which was passed and signed into law, were too heavily skewed toward the state's highest earners.

The measure unveiled Thursday includes a tax credit for low-income residents, which has long been pushed by Democrats in the Legislature. It also cuts taxes for those making less than $22,000 a year. Under the proposal, the first $8,899 earned by those in that category won't be subject to income tax. Currently, up to $4,499 for those in that category isn't subject to income tax. The proposal also raises the standard deduction for taxpayers from $2,000 to $3,300.

To pay for the cuts, the proposal imposes a 20 percent excise tax on cigarettes, or 80 cents a pack. The proposal would also make e-cigarettes subject to the same taxes as traditional tax products.

Since they're considered new taxes, the legislation only need a simple majority rather than the three-fourths support that tax increases usually require in the Legislature. Hendren's proposal has 16 co-sponsors in the Senate and 40 in the House.

Hutchinson stopped short of saying whether he backs the legislation. Hendren said he didn't expect opposition to the measure from the governor.

"It is important that any additional tax relief be offset on the revenue side, which this bill seems to accomplish through a new tax on tobacco and related products," Hutchinson, who is Hendren's uncle, said in a statement. "However, I will continue to study this bill and its revenue impact as it moves through the legislative process."

House Speaker Matthew Shepherd, a Republican, also expressed reluctance about the bill and said he was still reviewing the plan.

Hendren said he was still waiting on a revenue impact statement on the proposal. Arkansas Advocates for Children and Families, which has backed the state Earned Income Tax Credit, said that provision would benefit more than 300,000 people.