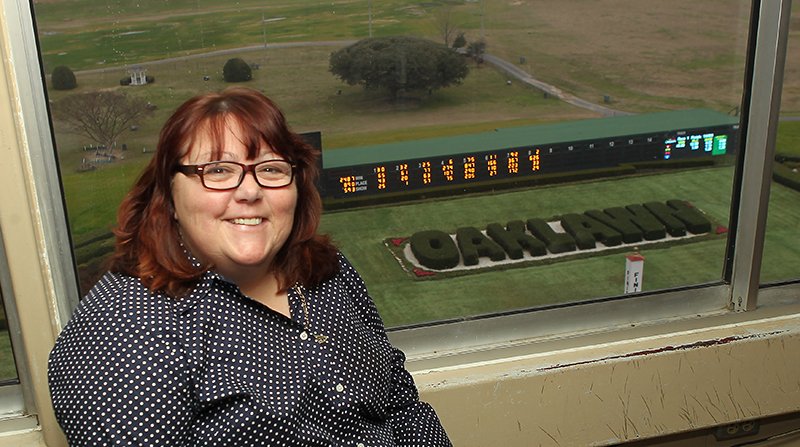 EDITOR'S NOTE: Each year, The Sentinel-Record presents a series of articles highlighting the unique occupations surrounding the sport of thoroughbred racing in Hot Springs and the individuals who make the live meet a success.

Her career in horse racing has led her all over the country, but it was an unconventional introduction to the sport that piqued press box manager Cathy Riccio's interests.

"As a kid, I was on Broadway. I did two shows and a movie -- I was in one movie with Brooke Shields -- and I was taking a tap dancing lesson," Riccio recalled during an early January interview just a week out from the start of Oaklawn's live race meet.

"It was Phil Black Dance Studio -- he even has a Facebook page where his old students go on and share stories -- well, he had a black-and-white TV that was kind of fuzzy, in the corner, and I was tapping away. He was kind of mean and would take that cane and 'One, two, three. Pick up your feet,' and I really didn't like it."

On that fuzzy television, Riccio said she witnessed the legend Secretariat winning the Belmont Stakes and was glued to the screen.

"So, anyway, ever since that day I was like 'I want more of that.' I hung up my Screen Actors Guild union card and said 'Adios.' Picked up a pitchfork, got a stable badge and it's history since then."

Since 1982, Riccio has worked in several aspects of the racing industry from walking hots to assistant training.

"I was a hot walker for David Whiteley, and his father was Frank Whiteley who trained Ruffian," she said. "It's all been good. I've worked with some really good people. In California, I worked out there as an assistant (trainer) for one of my favorite and most knowledgeable trainers, Paco Gonzalez. My goal, when I started, because it was right when Wayne Lukas was getting big, as one of my bucket list things I always said I wanted to be an assistant for Wayne, so I did that here actually.

"I also had horses for Dallas Stewart here and we won the Oaks with a filly called Lemons Forever and she trained right here, and she won at the meet. A pretty nice filly and she ended being an amazing broodmare."

As press box manager, Riccio now spends most of her time doing office work and assisting with keeping the website and social media up to date, but through that and her time working with Trainer Brad H. Cox she still gets to stay involved with the sport.

"I get here around 10 a.m. and check in with Jennifer Hoyt downstairs," she said. "I see if Giselle, because she's the main one on the social media, what little things that she would have for me. Like this morning, we did a Facebook Live. Then what I'll do is I'll make sure all the people, when the meet starts, have the overnights, their work tab, any changes that might happen. I have to keep our announcer, Vic Staufer, informed of claims so he can make announcements through the day. Pretty much, everything will come through email and then I'll print it and get it to the stewards also. I think the stewards have to approve all the claims before they go to Vic to announce it."

But because working hands-on with horses is still her favorite part of racing, Riccio said she always works a few different jobs wherever she goes.

"California, I worked as an assistant for Paco Gonzalez and I also worked for the broadcast center and HRTV. I've had quite the array of W-4 forms," she said. "Being an assistant for Lukas and for Paco was probably my two favorite jobs and I'd still probably be doing that kind of stuff if I didn't have knees that didn't work anymore.

"I really, really like hands-on being around the horses. That's my passion. I love this because I can still be in the game, I just can't do that now. I have to do office stuff now, but that's all right. At least I can still be in horse racing and I get my horse fix -- I go feed peppermints every now and then. And once a year, I get to saddle a horse for Brad Cox."

Having seen all sides of the sport, Riccio said the treatment of the horses is one thing she wishes more people on the outside understood.

"I wish what people would understand -- like the guy I'm working for now, Brad, the care is exceptional and the assistant, Jorje, he doesn't pull any punches and he doesn't let anybody shortchange a horse. It ain't happening otherwise they're going to work for somebody else," she said. "So at least the barns that I've been fortunate to be in, the horse comes first. I know that the outside looking in it's like 'Oh, what are they doing to those horses?' But man, those horses are cared for so well."