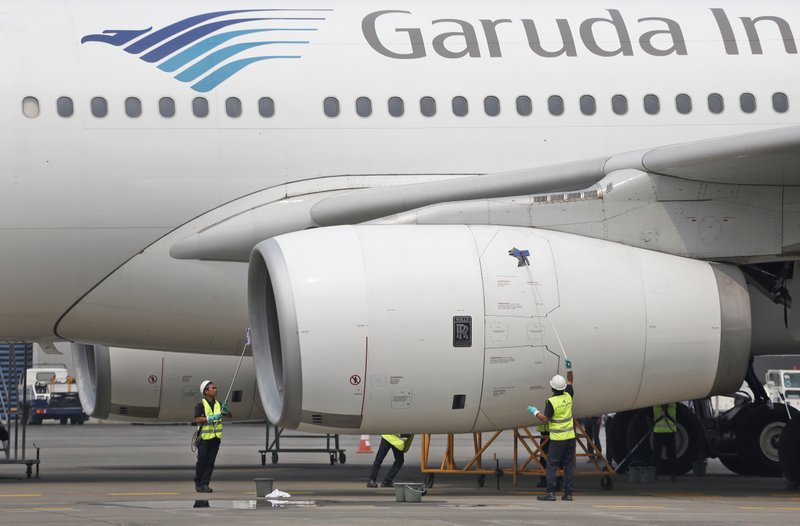 FILE - In this Sept. 28, 2015, file photo, workers clean a jetliner at GMF AeroAsia facility at Soekarno-Hatta International Airport in Jakarta, Indonesia. Indonesia's flag carrier is seeking the cancellation of a multibillion-dollar order for 49 Boeing 737 Max 8 jets, citing a loss of confidence in the model following two crashes in the space of a few months. (AP Photo/Dita Alangkara, File)

JAKARTA, Indonesia -- In a blow for Boeing, Indonesia's flag carrier is seeking the cancellation of a multibillion dollar order for 49 of the manufacturer's 737 Max 8 jets, citing a loss of confidence after two crashes within five months.

It is the first announcement of a cancellation since Boeing's new model aircraft were grounded following fatal crashes in Indonesia and Ethiopia.

PT Garuda Indonesia, which had ordered 50 Max 8 jets in 2014 and had received just one plane last year, sent a letter to Boeing last week requesting to cancel the order worth $4.9 billion, company spokesman Ikhsan Rosan said Friday. The carrier has so far paid Boeing about $26 million for the order.

Garuda joined other airlines worldwide in grounding its one Max 8 jet after the crash of an Ethiopian Airlines flight this month which killed all 157 people aboard. It came less than five months after 189 people died in the Oct. 29 crash of another Max 8, operated by Indonesian private carrier Lion Air.

"Passengers always ask what type of plane they will fly as they have lost trust and confidence in the Max 8 jet," Rosan told The Associated Press. "This would harm our business."

He said that Garuda plans to meet with Boeing representatives next week in Jakarta to discuss details of canceling the order.

"We don't want to use Max jets ... but maybe will consider switching it with another Boeing model of plane," Rosan said. He said Indonesian passengers are afraid to take flights using any Max model, whether it's the 8, 9 or 10 series.

A preliminary report from Indonesia's National Transportation Safety Committee in December stopped short of declaring a probable cause of the Oct. 29 crash.

Officials have provided scant details since then, saying they are still analyzing data from a cockpit voice recorder that was only recovered from the sea in January.

Meanwhile, in Europe, Polish national carrier PLL LOT said it was considering asking for financial compensation from Boeing or even a delay to deliveries of purchased 737 Max 8 aircraft after the planes were grounded globally following the crash in Ethiopia.

In a statement to the AP on Friday, LOT said it would wait for communications from Boeing and flight regulators on whether to put the Max 8 planes back into service. LOT has five 737 Max 8 planes and is to receive nine more this year. Its total fleet counts over 80 aircraft.

Another Polish carrier, charter airline EnterAir, said Friday it would also seek damages. It has two Max 8 planes and has placed orders for another four.

Earlier this month, Norwegian Air Shuttles said it would seek compensation from Boeing. It had grounded its 18 Boeing 737 Max 8 aircraft.

With Boeing's backlog of 4,600 unfilled orders for Max jets, the loss of the Garuda order figures to have little financial impact on the Chicago-based company. The danger is that other airlines could follow, particularly if investigators fault the plane for the accidents in Indonesia and Ethiopia.

"We think other cancellations may follow as global customers remain spooked after two crashes with seemingly similar causes," Jim Corridore, an airline analyst with CFRA Research, said in a note to clients.

Corridore said, however, that if Boeing delivers a software patch to a flight-control system suspected in the crashes, and the planes are allowed to resume flying, "most customers will be reassured." He said investors will eventually focus on strong demand for airliners.

The Wall Street Journal reported late Friday that federal investigators are looking into whether Boeing gave U.S. regulators and the company's customers incomplete or misleading information about the jets. The report cited people familiar with the matter who were not named.

Earlier this week, a person briefed on the matter told The Associated Press that U.S. prosecutors are looking into the development of the 737 Max jets. The Transportation Department's inspector general is also investigating the FAA's approval of jets, a U.S. official told AP.

Boeing Co. shares closed Friday down $10.53, or 2.8 percent, at $362.17 amid a broad stock market decline. Boeing shares have dropped 14 percent since the Ethiopia Airlines crash.