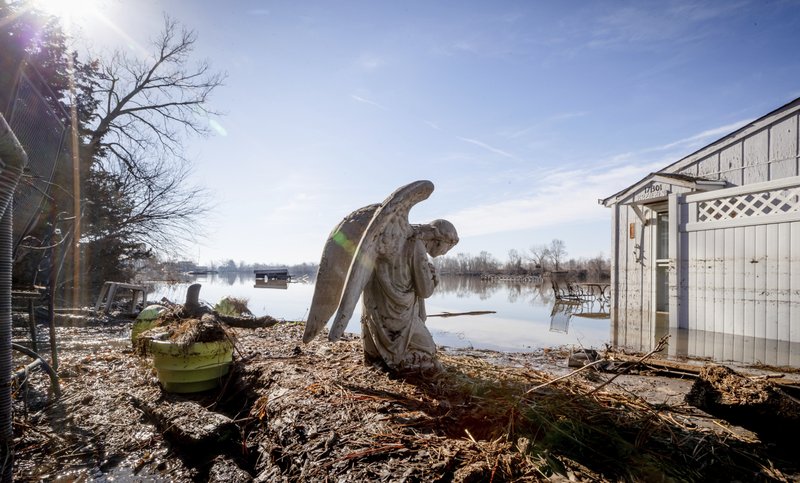 An angel statuary graces a yard near Hansen Lake Friday, March 22, 2019, in Bellevue, Neb. Residents were allowed into the area for the first time since floodwaters overtook several homes. Flooding in Nebraska has caused an estimated $1.4 billion in damage. The state received Trump's federal disaster assistance approval on Thursday. (Kent Sievers/Omaha World-Herald via AP)

ST. LOUIS -- Even as floodwaters receded in hard-hit places in in the Midwest, experts warned Saturday that with plenty of snow still left to melt in northern states, the relief may only be temporary.

Rainfall and some snowmelt spurred flooding in recent weeks that's blamed in three deaths so far, with two men in Nebraska missing for more than a week. Thousands were forced from their homes in Nebraska, Iowa and Missouri, as water broke through or poured over levees in the region. The damage is estimated at $3 billion, and that figure is expected to rise.

As temperatures start to warm, snowmelt in the Dakotas and Minnesota will escalate, sending more water down the Missouri and Mississippi rivers and their tributaries.

Lt. Col. James Startzell, deputy commander of the Corps of Engineers' Omaha, Nebraska, district, said even warmer temperatures are possible into next week. He urged people living near rivers to be watchful.

"There's a sense from the National Weather Service that we should expect it to continue to happen into May," Brinton said. "With our levee breaches in Atchison and Holt and Buchanan counties, it's kind of scary really."

A precautionary evacuation involving hundreds of homes in the St. Joseph area was lifted as the Missouri River began a swift decline after unofficially rising to a new all-time high, inches above the 1993 record. St. Joseph was largely spared, but Brinton said 250 homes were flooded in the southern part of Buchanan County. It wasn't clear when residents would be able to get back.

When they do, officials say they need to be careful. Contaminants that escaped from flooded farm fields, industrial operations and sewage plants are part of the murky water now saturating homes.

Another risk is posed by wildlife. Brinton said two people in Buchanan County were bitten by snakes after returning home following flooding in 2011.

The Missouri River had yet to crest further downstream in Missouri, but the flooding impact in those areas was expected to be far less severe.

In South Dakota, Gov. Kristi Noem activated 13 members of the Army National Guard to help distribute water on the Pine Ridge Indian Reservation after floodwaters washed out a county waterline. The guardsmen will provide drinkable water to people in the communities of Red Shirt, Pine Ridge, Porcupine, Evergreen and Wounded Knee. The Guard will set up from a central location in each community until the waterline is fixed.

Even the lower Mississippi River was impacted. The U.S. Coast Guard on Friday rescued two boaters from a disabled vessel near New Orleans. Coast Guard officials said the flooding means more debris in the river, and the currents can pull a boat into danger.