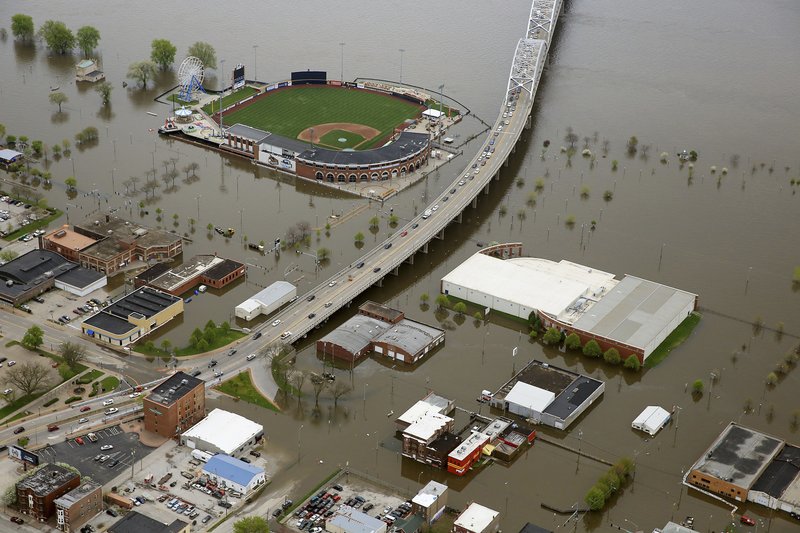 OMAHA, Neb. -- When the Mississippi River reached record levels 26 years ago, the overflowing water covered 400,000 square miles and caused dozens of deaths. This week, though, when the river exceeded those levels in parts of the Midwest, flooding was mostly limited to open riverfronts and swaths of farmland.

The difference between now and "The Great Flood of 1993," officials say, largely comes down to actions that communities took back then, including erecting floodwalls and temporary flood barriers on riverfronts that can be put up before the water reaches main streets.

In Bettendorf, Iowa, a floodwall has largely protected the city from a record crest of 22.7 feet set Thursday. But just to the west in Davenport, which has no permanent floodwall, several blocks of downtown along the riverfront were overrun by a wall of water when a temporary barrier broke Tuesday.

Bettendorf Mayor Bob Gallagher said Friday in a conference call of Mississippi River community leaders that other actions also helped mitigate flood damage, including restoring natural infrastructure like wetlands and marshes, protected flood plains and conservation areas set aside in the aftermath of the 1993 flood.

"We have begun to see the benefits of increased spending from disaster mitigation and planning," he said.

But small communities often don't have the resources to invest in diverting floods.

Buffalo, an Iowa town of about 1,200 that is less than 10 miles downstream from Davenport, was swamped Thursday when floodwaters easily overran sandbag barriers residents and volunteers had scrambled to erect. Buffalo City Clerk Tanna Leonard told the Quad-City Times that her town can't afford a floodwall or even the large, temporary, sand-filled containers intended to block floodwaters.

Grafton, Illinois, which saw a 3-foot rise in the river from Wednesday to Thursday, is "totally unprotected," Mayor Rick Eberlin said. The river is predicted to crest Monday or Tuesday at just under 32 feet, but could rise higher as more rain falls in the coming days. The record at Grafton is 38.17 feet set in 1993.

"We just have to wait and see how much debris gets pushed into our banks and how long this will last and be prepared to clean up the aftermath," Eberlin said.

Some small towns might manage to keep the water at bay, but find themselves wiped out financially in the process.

Crews in Kimmswick, Missouri, a town of about 150 just south of St. Louis, are "building madly" on top of the community's permanent levee as the river is expected to crest at more than 42 feet today, Mayor Phil Stang said. Flood stage is 30 feet.

He joined other mayors in calling on Congress to create a revolving disaster fund from which affected communities could borrow to ease the financial burden of flooding. It would be separate from money that the Federal Emergency Management Agency reimburses flooded communities.

There are a number of similarities in conditions surrounding current flooding and that seen in 1993. Given that and the possibility of a wet spring and early summer, officials aren't yet prepared to say that flooding won't eventually rival "The Great Flood," which covered nine states and lasted for nearly 200 days in some areas. Some 50 deaths were also attributed to the '93 flood.

Historical information gathered by the National Oceanic and Atmospheric Administration shows that the 1993 flood was exacerbated by saturated soil in the Mississippi River basin -- which is also the case this year. Flooding along the edges of the river this year has lasted more than a month in most places.

"The state of Iowa has received more precipitation in the last 12 months than in any one-year period in 124 years of recorded data," Gallagher, the Bettendorf mayor, said. "So regardless of whatever solution, whether it be a levee, floodwall or natural amenities ... when you get as much rain as we have this year, there's just no way to avoid this situation."