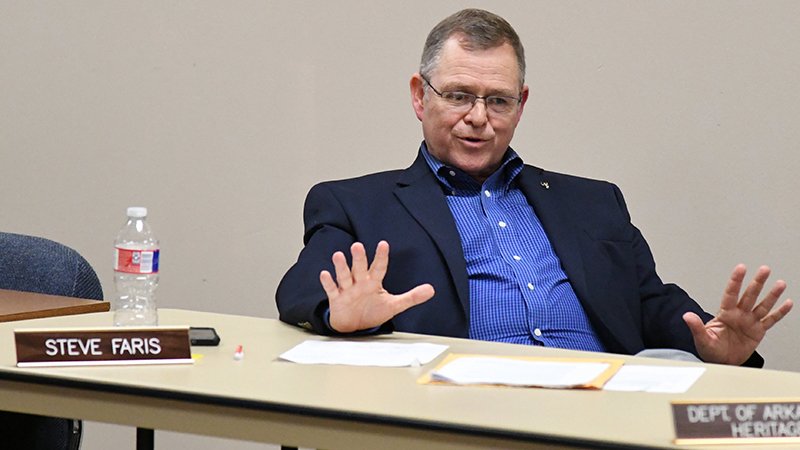 The Sentinel-Record/Grace Brown LISTENING: Arkansas School for Mathematics, Sciences, and the Arts Board of Visitors member Steve Faris addresses the community during a board meeting at the school on Monday.

Many of the issues raised at Monday's board of visitors meeting for the Arkansas School for Mathematics, Sciences, and the Arts are due to a "long and somewhat unintentional lack of communication," one of the board members said Tuesday.

"I think that's the cause. High school is different than a two- or four-year college, and it just doesn't get the majority of the attention that the U of A serves to two- and four-year colleges," said board member Steve Faris, a former state senator.

"I think there really needs to be a process of communication put in place between the school and university that deals with underage kids. I think there has to be a line of communication set up that's unique to a high school. It's different. I hope that the next step will be for the officials at the University of Arkansas to look into the situation and do their due diligence, whatever they think is appropriate."

The board of visitors serves in a "supporting and advising role with regard to operation of the school. Board members are appointed by the governor and serve a term of seven years. Campus policy is set by the University of Arkansas System Board of Trustees," according to the school's official website.

The Sentinel-Record/Grace Brown PUBLIC CONCERNS: Arkansas School for Mathematics, Sciences, and the Arts Director Corey Alderdice listens to concerns from the community during a board of visitors meeting at the school on Monday.

Nine people voiced a variety of concerns to the board of visitors at its regular meeting on Monday during the time allotted for public comment. The regular meeting was about a half-hour long; the public comments took over 90 minutes. From 40 to 50 people attended the meeting, which was held at the school.

Common grievances expressed included disapproval of the dismissal of former ASMSA employee Valerie Carpenter; the displeasure and discomfort on the part of parents and students caused by the residence life staff requiring student participation in an activity known as a "privilege walk" that allegedly became the source of bullying; fear of retaliation toward faculty and students from administration; and an overall lack of transparency from school administration.

A 17-year-old male student alleged that he was sexually assaulted on campus and no action had been taken by administration after he reported the incident three weeks ago, with the alleged assailant remaining on campus.

"It was a letting of feelings that probably was long overdue, and I hope that the University of Arkansas will put in some guidelines to govern this unique high school that's part of their system. Even though Amendment 35 gives a certain amount of autonomy to higher ed, it does not deal with people who are not 18 years of age yet, that are still not considered, under Arkansas law, adults," Faris said after the conclusion of Monday's meeting.

"Ultimately understand, due to student-employee privacy that we're significantly limited on the direct response that we can make to an individual claim," ASMSA Director Corey Alderdice said after the meeting.

He clarified that the comment was directed at no particular claim detailed in the public comments.

"We will be happy to have any further conversations with them to elaborate our position, and again, ensure that all concerns are thoroughly and properly addressed," Alderdice said, referring to communication between the school and the University of Arkansas System after the meeting.

"I think the major take-away from last night's meeting is that parents want to ensure that there is always a line of communication in which they can address their concerns, as well as celebrations, at ASMSA," Alderdice said Tuesday.

"I would say the majority of the parents who made remarks last night are ones with whom we have engaged on these topics throughout the year. While there will be times where our decisions and expectations differ, we make every effort to act in accordance with our policies and in respect to student support and safety," Alderdice said. 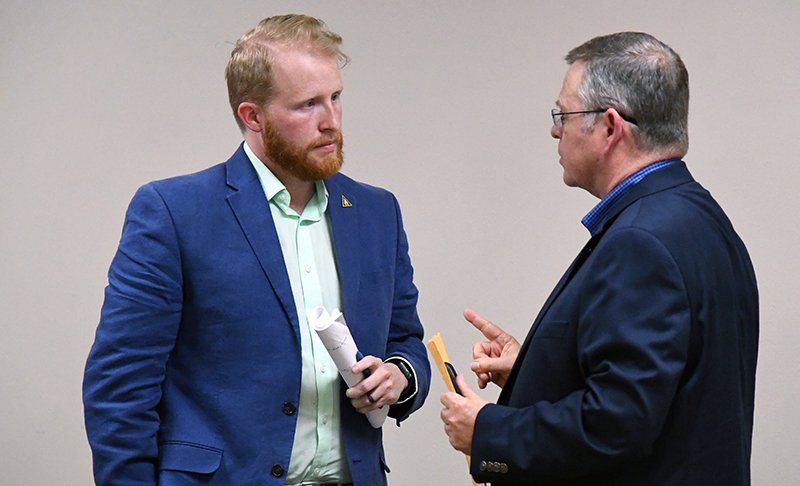 The Sentinel-Record/Grace Brown CONFERRING: Arkansas School for Mathematics, Sciences, and the Arts Board of Visitors member Steve Faris, right, speaks with the school's director, Corey Alderdice, following Monday's board meeting at the school.

Faris said that, as of Tuesday afternoon, he had received no confirmation from the University of Arkansas System, or the ASMSA administration, that system President Donald Bobbitt or the chair of the board of trustees, John Goodson, had received or were sent a copy of Monday's proceedings, despite the board agreeing to expedite doing so during the meeting.

"Our admin has certainly had discussions about last night's meeting, and have been in contact with our colleagues at the U of A System office. That information has not been sent at this time, but is being compiled per the board of visitors' request," Alderdice said Tuesday afternoon. "They will certainly receive that this week."

As for the school's campus and students, Alderdice said Tuesday was an average day.

"It's been like any day. We are focused on student engagement, and for the majority of our campus, they continue their efforts to support students in the classroom and residences."