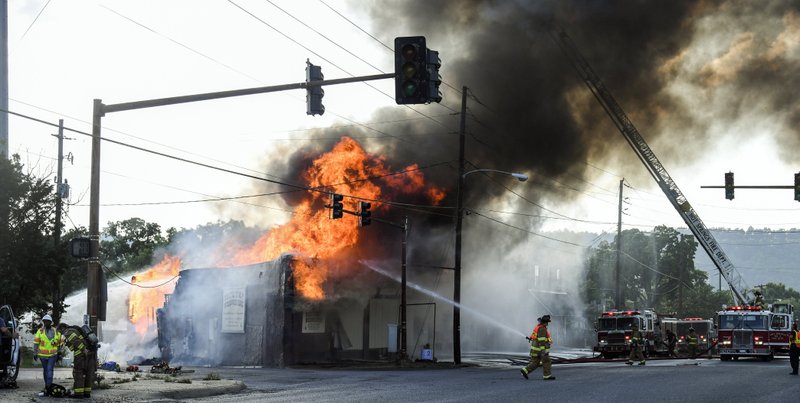 The Sentinel-Record/Grace Brown ROAD CLOSED: Malvern Avenue was closed at the Crescent Avenue intersection early Monday evening due to a fire at What’ll It Be Woodworking, 1013 Malvern Ave. The Hot Springs Fire Department had multiple units at the scene, and traffic was diverted onto surrounding roadways.

The 1000 block of Malvern Avenue was closed for hours and hundreds of Entergy Arkansas Inc. customers were left without service Monday evening after a fire destroyed What'll It Be Woodworking, 1013 Malvern Ave.

Four engines, including a ladder truck, and an unknown number of Hot Springs firefighters worked in sweltering, near 90-degree weather to contain the blaze in the business, which was connected to another building and close by another.

Jim Garland, Entergy's regional customer service manager, said the utility had to de-energize a power line for the ladder truck to work safely, and power was expected to be restored by 9 p.m. Monday. According to Entergy's online outage map, around 1,700 customers were initially affected, and the number later dropped to around 540.

Assistant Hot Springs Fire Marshal Carlton Scott said no one was inside the building during the fire, which was contained by around 7 p.m.

The call came in just before 5:30 p.m. Monday. When firefighters first arrived, no flames were visible but thick, black smoke was seen billowing from the building. A short time later, firefighters at the scene could be heard shouting that there were flames on the lower level of the building.

After nearly 40 minutes, flames began to shoot out from the top of the building. The fire appeared to start toward the back, lower section of the building and move forward toward Malvern Avenue. Nearly an hour and a half into the fire, the wall facing East Maurice Street collapsed into the road.

All four lanes of traffic on Malvern were closed and traffic was diverted to side streets in the area.