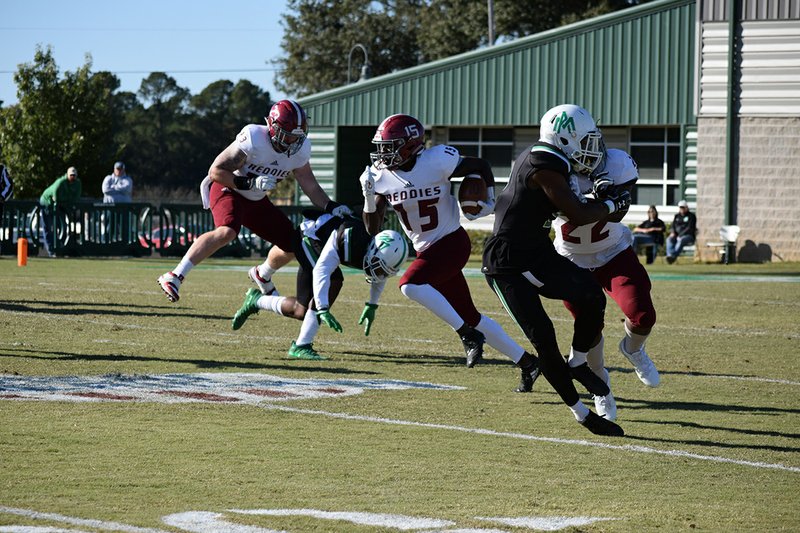 EL DORADO -- Ouachita Baptist University's Brockton Brown did what running backs do when they run for 149 yards and three touchdowns to lead their team to victory.

He praised the offensive line in OBU's 38-21 victory over Southern Arkansas University in front of an announced crowd of 4,741 at the Murphy USA Classic at Memorial Stadium.

But Brown, a senior from Sheridan, went off script for a moment when trying to explain his ability score touchdowns, whether long or short.

He leads the Great American Conference with 17 rushing touchdowns, and he came into Saturday's game with the second most in Division II.

"Whenever I break out on a run, I remember my mom in peewee [league]," he said. "She'd run with me down the sidelines. She'd always say, 'Never let me beat you to the end zone.' That always pops into my head when I break out into the open."

Brown returned to praising an OBU offensive line that paved the way for the Tigers to rush 49 times for 314 yards and 4 touchdowns. Specifically, he credited the linemen's work in OBU's Wildcat formation when he receives a direct snap and looks for room to run.

Southern Arkansas coach Bill Keopple shook his head and shrugged when asked about Brown's ability to score touchdowns -- he has reached the end zone 11 times in the past four weeks.

But just when it looked like the Muleriders would get the ball back after a third-down stop, SAU was called for unsportsmanlike conduct, extending OBU's drive that eventually ended with a Gabe Goodman 39-yard field goal with 7:37 to play.

"The stop we had when it was 28-21, and then we get a flag, that hurt," Keopple said. "I thought when we had the stop down here, we had a chance to win the football game, and we did. It got took away from us with the personal foul penalty. That's disheartening right there."

The field goal was aided by the handiwork of holder Jake Ford, who scooped up a low snap in time for Goodman to hit it.

"I kind of had to slow down, do a skip step because of the snap," said Goodman, who admitted he did not think he made the kick. "The contact on the foot. Dang it, that's not it. I just kinda watched it. It was the longest three seconds of my life."

The ball cleared the crossbar, and OBU recovered a fumble on the ensuing kickoff to set up the game-clinching touchdown on Thomas' 26-yard run.

"It's a game of inches," OBU coach Todd Knight said. "Special teams, same way. The ball goes through by 2-3 feet. It's a different game if it doesn't."

"I don't think either team was out of hand," OBU Coach Todd Knight said. "It did get a little chippy."

Knight said he was pleased with the way the Tigers started, the way they responded when SAU twice closed within a touchdown, and how they put the game away with 10 fourth-quarter points.

"It's football," Knight said, trying to explain the ebbs and flows. "They're 7-1 for a reason. Those guys are as good as anybody in the league."

The victory was the fifth in a row for the Reddies, who lost their only game of the season Sept. 28 at Harding in Searcy.

The Reddies led 13-0 early in the second quarter on touchdown passes from Stammetti to Doug Johnson (51 yards) and Curry (79 yards), but the Boll Weevils came back on Demilon Brown's 38-yard touchdown pass to C.J. Parham and Josh Marini's 43-yard field goal to close the half with Henderson State leading 13-10.

Marini's 30-yard field goal with 3:50 left in the third quarter tied the game at 13-13 before Stammetti found Curry for the go-ahead score.

Logan Moragne ran 46 yards for a score with 3:13 left in the fourth quarter to give the Reddies a 27-13 lead. UAM responded with Brown connecting again with Parham, this time on an 8-yard score with 2:13 remaining to get the Boll Weevils to within 27-20.

Braden Boykin recovered the ensuing onside-kick attempt for the Reddies, who then ran out the final 2:01 for the victory, with Moragne's 21-yard run on third and 1 at the UAM 22 keeping the drive going.

Harding (8-1, 8-1 GAC) rushed for 558 yards and seven touchdowns for its eighth consecutive victory Saturday in a blowout over East Central (Okla.) at First Security Stadium in Searcy.

On top of their offensive assault, the Bisons' defense had four interceptions in the victory, which was their eighth consecutive at home and eighth in a row over the Tigers.

The Bisons compiled 341 rushing yards and five rushing touchdowns in the first half. Junior quarterback Preston Paden ran for a career-high 135 yards on 10 carries and scored on an 83-yard run, the longest ever by a Harding quarterback.

Junior Cole Chancey rushed for 2 TDs and 116 yards to give him 1,097 on the ground this season. Chancey went over 1,000 rushing yards for a season for the second time in his career, becoming only the fifth Harding player with two 1,000-yard seasons.

Senior safety Jacory Nichols intercepted two passes, returning the second 47 yards for a TD to give the Bisons a 28-0 lead early in the second quarter. It was Harding's fifth defensive TD of the season and the second for Nichols.

Jesse Honnas scored on a 5-yard run in the third quarter, and Caleb Danner added a 2-yard TD run in the fourth quarter.

Junior quarterback Carter Burcham threw for 289 yards and three touchdowns as Arkansas Tech (3-6, 3-6 GAC) rolled to a victory at Thone Stadium in Russellville.

Arkansas Tech led 17-7 at halftime then reeled off the next 21 points to take a 38-7 lead early in the fourth quarter before the Savage Storm (1-8, 1-8) added a pair of late touchdowns.

Burcham found Drew Wade for an 80-yard touchdown pass in the second quarter to give the Wonder Boys a 10-0 lead. He added a 10-yard scoring toss to Caleb Batie and a 72-yard strike to Wallace Foote in the third quarter.

Arkansas Tech also got a 39-yard field goal by Jesus Zizumbo, a Donald Joshua fumble recovery in the end zone and a 4-yard touchdown run by Tanner Gaines.