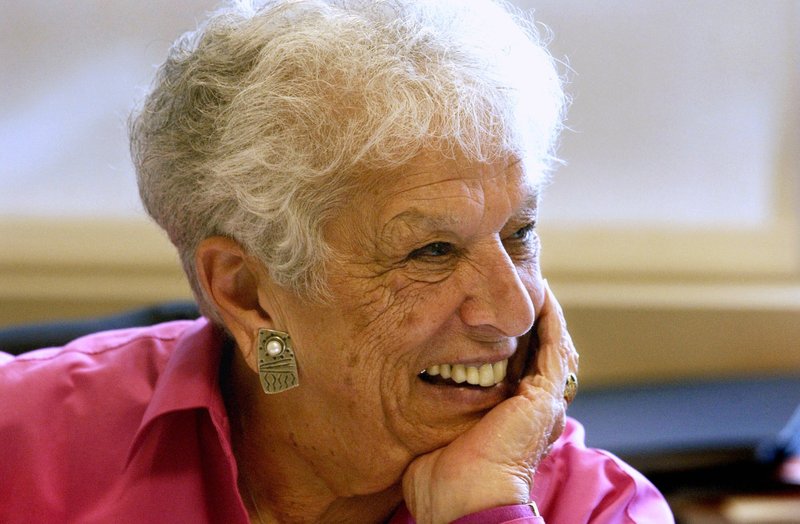 This September 2004 file photo shows Gert Boyle at the company's headquarters in Beaverton, Ore. Boyle, the colorful chairwoman of Columbia Sportswear Co. who starred in ads proclaiming her as "One Tough Mother," died Sunday. She was 95. - Stephanie Yao/The Oregonian via AP, File

PORTLAND, Ore. -- Gert Boyle, the colorful chairwoman of Oregon-based Columbia Sportswear Co. who starred in ads proclaiming her as "One Tough Mother," died Sunday. She was 95.

Company spokeswoman Mary Ellen Glynn did not disclose the cause of death. Boyle, who was chairwoman of the company board of directors, died at a Portland, Oregon, assisted living facility, Glynn said.

Boyle took over the small outdoor clothing company in 1970 after her husband died from a heart attack. At the time, she was a 46-year-old housewife and mother of three with no real business experience. But she helped build the struggling company into a national brand and retailer.

"Early to bed, early to rise, work like hell and advertise," Boyle often said, among other pet phrases.

It was her role in an advertising campaign in the 1980s that gave her national exposure.

The ads showed Boyle putting her son, Tim, president of the company, through treacherous outdoor feats to ensure the products met her standards. An iconic photo from the campaign, which has her flexing her arm emblazoned with a "Born to Nag" tattoo, still hangs in the company's Beaverton headquarters.

Boyle's father founded Columbia after the family fled Nazi Germany and settled in Portland. Her husband took over the business in 1964. When he died, the business took many calls wondering if Columbia would close and the bank urged her to sell the company.

Always plucky, she entertained an offer for its sale at the time but told a prospective buyer that for the price they were offering, she'd rather run it into the ground herself.

But Columbia flourished under her leadership, and that of her son.

While Tim ran the operations as president, Gert Boyle continued to put in 40-hour work weeks well into her 80s and signed every company check.

Columbia grew and over the years acquired key brands such as Mountain Hardwear, Pacific Trail and Sorel. The company now sells products in more than 100 countries.

She was well known for her no-nonsense attitude and boisterous personality -- quick to offer staff or those nearby a "Gertism" and often a few comments not fit for print.

Boyle was the first woman inducted into the National Sporting Goods Hall of Fame and often recognized for her work as a female business leader, including a book on her experience.

She had three children with her husband, Neil, who was her college sweetheart. Tim Boyle is president of the company, her daughter Sally runs Portland company Moonstruck Chocolates and her daughter Kathy is an artist.

She had five grandchildren.