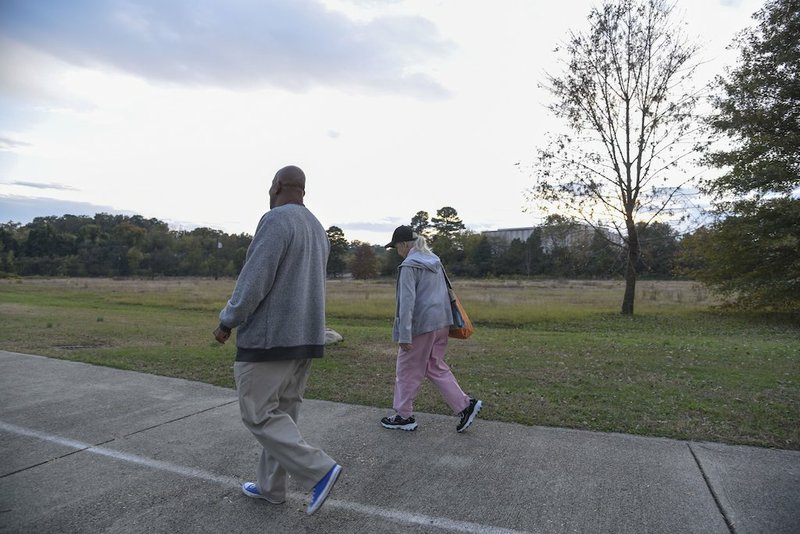 Two people walk along the Hot Springs Creek Greenway Trail with the future site of the Majestic Park baseball complex visible in the background on Wednesday. - Photo by Grace Brown of The Sentinel-Record

Bob Wright, senior managing director for Crews & Associates, told the Hot Springs Board of Directors Tuesday night that the $7,875,000 taxable bond issue it authorized removed any Internal Revenue Service restrictions on advertising at the complex or selling its naming rights. The agency's rules limit advertising and corporate sponsorships at facilities financed by tax-free bonds.

"(The Hot Springs Advertising and Promotion Commission) took the step to do taxable to take away any limitations of the sponsorships of the tournaments or the ball fields or anything like that," he said.

The ad commission will secure the debt with all or a portion of the 3% sales tax it levies on prepared food and lodging inside the city, but the city's governing body issued the debt on behalf of the commission. The city will hold the $7.5 million in bond proceeds available for the project in a special account after Tuesday's sale closes next month. Proceeds included $375,000 in issuing costs.

City voters approved the ballot question pledging hospitality tax proceeds toward repayment of the bond issue in a Sept. 10 special election. Fewer than 9% of the almost 22,000 eligible voters weighed in, approving it by a 1,126-712 margin. The ballot title authorized the board to issue up to $8.5 million in debt.

The $7.87 million the city board endorsed Tuesday will be paid down over 30 years, with a maximum annual debt service of $619,148. The post pricing sheet Wright presented the board showed more than $6,433,773 in annual hospitality tax revenue will be available for debt service. Total principal and interest of $14,287,460 will be paid over the life of the issue.

Visit Hot Springs CEO Steve Arrison said the ad commission has no plans to sell the complex's naming rights. Attaching a corporate or local business sponsor to the name would detract from nostalgia he said will distinguish the park from other baseball facilities, he said.

The championship diamond of the five field complex will be situated on Jaycee Park, spring training grounds for numerous Major League teams during the 1940s and 50s and the former home of the semi-professional Hot Springs Bathers.

"We're definitely trying to accent that," he said. "We want it to feel a bit like you're watching a baseball movie, 'Field of Dreams' or 'The Natural.' It's a historic field. We want it to celebrate the history of Hot Springs. We want kids, when they come from all around the country, to read and see and realize all the great players who played on those fields. It's a great selling point for us as we move forward with this."

Arrison said he foresees less conspicuous advertising offsetting the complex's operating costs. Outfield wall advertising that was a staple of early ballparks' revenue streams would align with the nostalgia he hopes to evoke, he said.

"I'm sure we'll have signs in the outfield, like the old-timey signs at the old ballparks," he said. "We might ask a local business to put up one of their older signs. They'll probably be scoreboard advertising, but Majestic Park is going to be Majestic Park."

Issuing costs included a $51,187 underwriter's fee representing the difference between what Stephens Inc. paid the city for the bonds and the price Stephens charged investors. They also included bond counsel Friday, Eldredge & Clark's $39,000 fee and a $215,000 reserve that can pay bondholders should a decline in sales tax revenue prevent the ad commission from servicing the debt.

Borrowing costs have gone up since the city refinanced $5.79 million in outstanding principal and interest on water fund bonds in August, but Wright said the 3.54% interest rate Stephens secured Tuesday is favorable for a 30-year debt issue.

"If we would've priced them at the same time, in late August, when we were 10 or 15 basis points off an all-time historic low, it might have been close to 3.4%," he said, comparing the timing for the refunding water bonds and Tuesday's issue. "It's still very cheap borrowing for 30 years."

Moody's Investors Services gave the bonds an A1 credit rating.