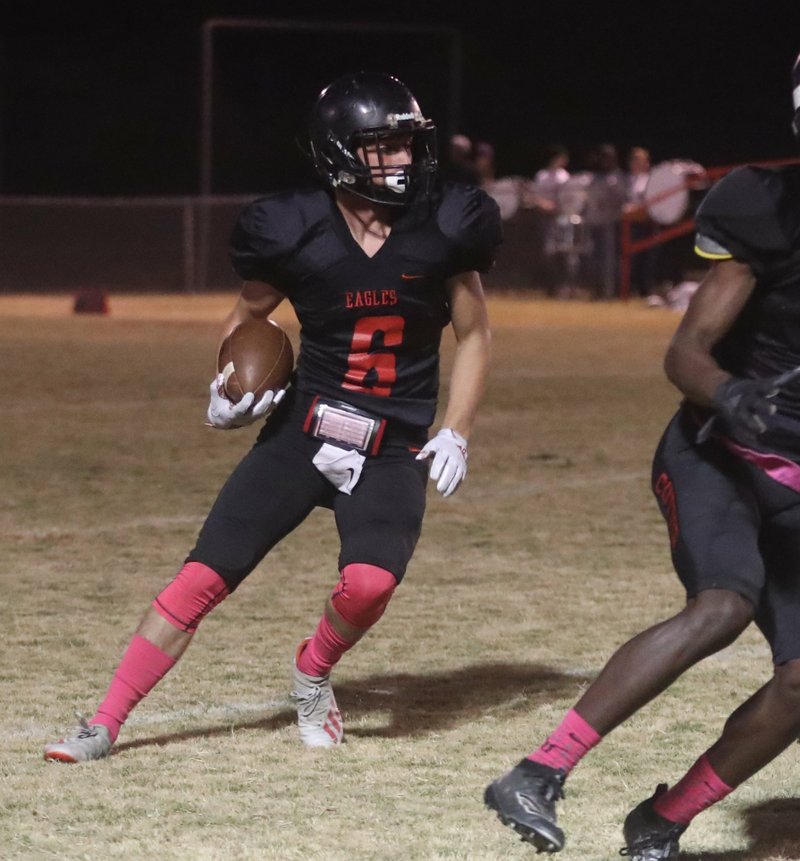 With three straight wins under its belt, Cutter Morning Star is hitting its stride at the right point of the season, but the Eagles have a tough battle tonight as they welcome the Magnet Cove Panthers to Eagle Field.

"They're undefeated in conference, you know," CMS head coach T.C. Shamel said. "They're the real deal. They're gonna be the one-seed of AA. I think we're gonna do what we've continued to do all year. It's senior night for us, and we get to play at home. We need to get some momentum, and we're treating this like a playoff game. This is one of the better teams we've played this year, and we know it, and if we can have some success and play well, that should give us some confidence going into the following week."

Magnet Cove head coach Caleb Carmike is proud of the way his team has played so far this year.

"The key is to be consistent and come out every week like the game is a season of its own, and our kids have done a great job with it so far," he said. "Hopefully they'll continue to do so."

The Panthers have had several improvements throughout the season that have helped them reach this point.

"Defensively, we've improved quite a bit from the beginning of the season to where we are now. Our secondary has improved; we've gotten better up front and at the linebacker position. As our defense has gotten better, I think that's made us a better football team.

"Our offensive line has really improved as a unit over the course of the season, and they do a great job of getting off the football and making holes. We're always gonna pride ourselves on being able to run the football offensively, and our passing game has opened up this year more than it has the past two years by far, so that's been big for us if we play somebody that decides to load the box, we have an answer now with the ability to throw the ball down the field."

The Eagles came out a little slow against Bigelow last week, but they powered through to capture a 47-21 win.

"It was 0-0 with six minutes to go before halftime," Shamel explained. "We came out and turned the ball over four times in the first half, and then we finally got some things going. Keshawn Blevins had a couple interceptions returned for touchdowns; Brock Duncan had one. And then offensively, we started doing a little better in the second half. We had a decent little cushion in the second half."

Defense has been a strength that Shamel could rely on from his Eagles this fall.

"As a matter of fact, all year long our defense has carried us in some games for sure," Shamel said. "We had three interceptions returned for touchdowns last week, so when your defense is scoring 21 points, that's big."

Carmikle commended Shamel on turning the football program around from a winless conference season a year ago.

"Cutter is much improved, and their kids are playing with a lot of confidence," he said. "They're a scrappy bunch. I think it's a good matchup and should be a fun game. They have some very talented skill players, and they've got a little bit of size up front. It's definitely two good football teams playing each other."

Shamel attributes this to the fact that his players have gained another year's experience.

"This is basically the same team we had last year," he noted. "We're just not as young. We got all the juniors last year that were in some close games and did some things right, didn't get some wins. But they're grown up. They're seniors. We're doing a lot better."

Magnet Cove junior running back Landon Stone has 161 rushes for 1,824 yards, and Shamel labeled him the Panthers' "feature guy" while also saying that quarterback Tyler Hodges is a "good hand."

"We know we've got to stop Landon Stone," he said. "He's first or second in our conference, almost 2,000 yards rushing, but we're gonna bring our defense and tell them to get him. That's what we gotta do. They're very good up front, a solid team. They're 8-1 for a reason and 6-0 in conference for a reason. They're well-coached, and they play good football, but it's not just Stone. He's the one that gets the most touches and the one that they make sure gets the ball."

Carmikle praised both Stone and Hodges for their help in leading the Panthers' offense.

"He's a very talented football player," Carmikle said of the 5-9, 175 pound running back. "He's done a great job of finding holes, and he's a real explosive runner. He can score any time he touches the ball. Tyler Hodges throws the ball well and really does a good job using his legs to extend plays."

Carmikle noted that CMS junior quarterback Sam Moore is a dual-threat player who has been successful in turning bad plays around.

"Their quarterback is talented and does a great job of extending plays," Carmikle said "He's had a lot of success scrambling. We've seen mobile quarterbacks this year -- some we've done great with and some we struggled with, so that's gonna be interesting to see how our kids come out against the quarterback."

The Panthers aim to set the tone for the game early.

"I think the key is to start fast and set the tone," Carmikle said. "We really try to be the most physical team on the field every week, and that's no different this week. When we get the ball, we want to drive down the field and score and contain them defensively."

The Eagles look to recover from last week's slow start.

"We came out against Bigelow a little flat," Shamel said. "We can't do that against these guys. If we come out and turn the ball over four times and give Magnet Cove really good field position, we're gonna be in trouble."